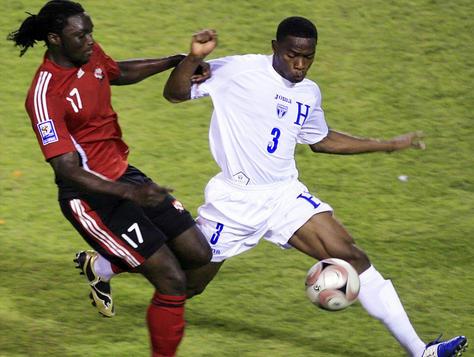 Stoke City striker Kenwyne Jones has been adjudged the Trinidad and Tobago Football Federation "Player of the Year" for 2010.

Jones will also be a nominee for the First Citizen's Sportsman of the Year following the decision by the governing body for football in T&T.

The big striker, fresh from his goal in Stoke's 2-0 win over Everton on the weekend, said he felt honoured to be named the top player.

"Well it is an honour to be voted top player  and I must say thanks to the people who made it happen," Jones told TTFF Media.

" I appreciate this very much."

On 11 August 2010, Jones signed for  Stoke City on a four-year-deal for a club record fee of £8 million. He opened his account on September  13 for Stoke,  netting on his home debut against Aston Villa in a 2–1 win.

He then followed up bys by scoring against West Ham United, Fulham  in the League Cup and Newcastle United. The former W  Connection player scored the second goal on November 13  in a 2–0 win against Liverpool at the Britannia Stadium

Jones, though bouncing shoulders week in week out with the best players in the world in one of the Top leagues globally, still wants to play his part in Trinidad and Tobago's attempt for success on the world stage.

"The team hasn't done well in 2010 but I think we can look forward with optimism for the future seeing the talent we still have in the country.

" I just think that everyone needs to pull together to get it right in the future and on the road to 2014," Jones added.

And the former Sunderland man is keen to don the national colours once called upon.

"‎I'm definitely looking forward to representing my country.  It's always a honour to do so and I will continue to do my country proud while flying the flag high.

Trinidad and Tobago has a lot to offer and we have quite a lot of upcoming and capable footballers that will also do the country proud," Jones added.