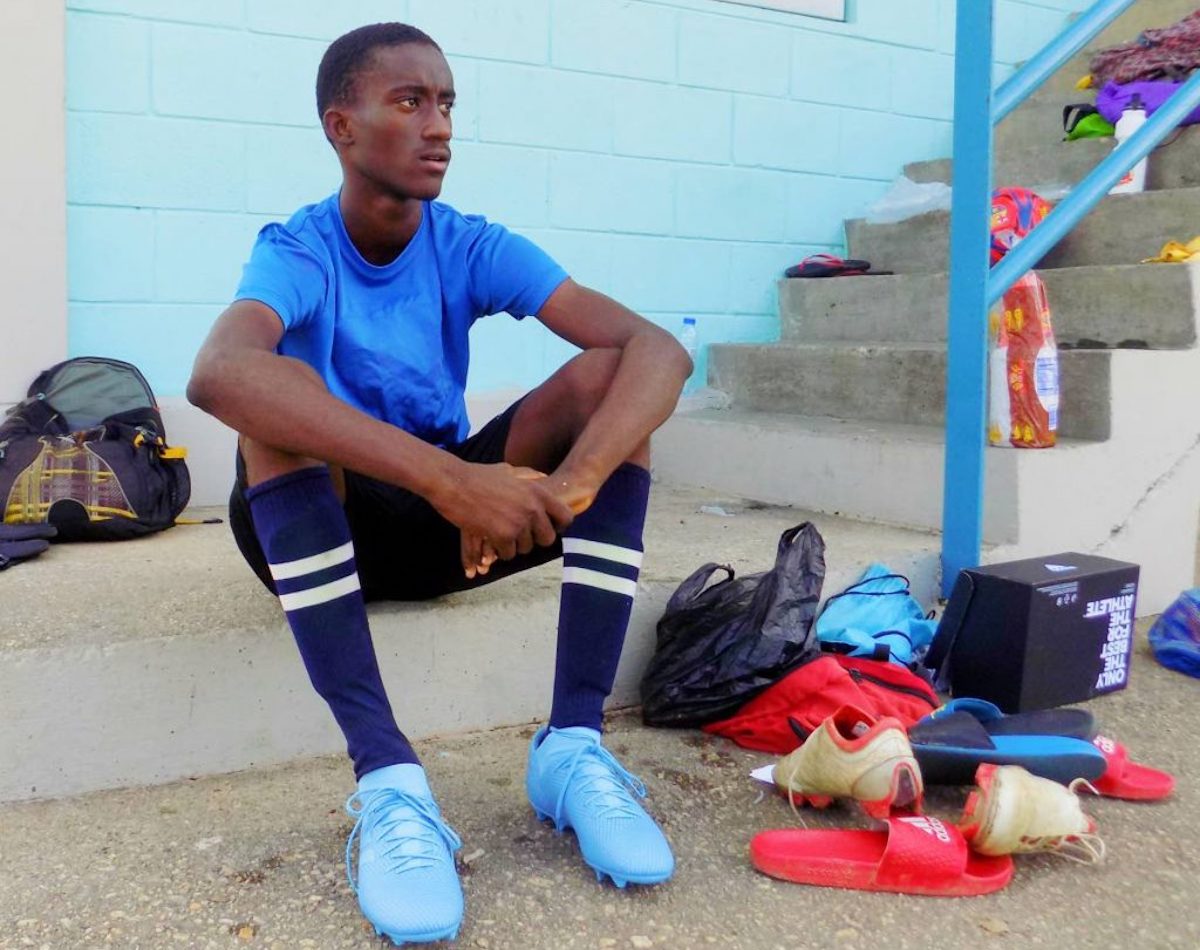 IT’S Sunday morning in Laventille, an elderly man flanked by about ten youths make their way to the Fernandes recreational field, along the Eastern Main Road, in the shadow of the company’s industrial estate.

The man is coach Michael Paul, a well-known athletic enthusiast and this is a weekly ritual where he teaches youths not just about the beautiful game of football but also about life, good sportsmanship, being a respectable winner and a graceful loser.

Among these youths is 15-year-old Phase Five, Beetham resident Fabien Ayres, who finds time to assist in the development of the younger talent in his community alongside Paul, his longtime coach and mentor.

Ayres is a fourth form student, at St Anthony’s College, and despite his relatively young age he has already earned an impressive reputation as an attacking defender for his school’s football team. However, he believes he has much more to offer than his skill as an athlete and dreams of earning a scholarship to attend university in the US. Ayres has become a beacon of hope to his peers.

Speaking with Sunday Newsday during a recent training session, Ayres said he enjoyed speaking with and mentoring younger players in the community and wanted them to know that despite their circumstances and environment, they each had a responsibility to improve themselves by realising their passion and pursuing it relentlessly.

“It makes me feel good to be able to inspire or motivate others to make themselves better people. I don’t want them (youths) to let where they come from define them.

“Just because you’re from a particular area doesn’t mean that place should define you. Be yourselves and realise what you’re passionate about.”

Even as he continues to encourage and motivate others to be positive and push themselves towards greatness, Williams himself admits it can be tiring.

While achieving some popularity in his school and his community, Ayres said he has had to face disappointment in the sport he loves, being sidelined at games and even failing to make the cut for a local football club he admired.

Although disappointing, he said these setbacks have fuelled his ambition to make himself not only a better player but a mature adult.

He said one of the more sober reminders of his mortality and the path before him was the death of his friend and fellow St Anthony’s Tiger 14-year-old Luke Williams, who was shot and killed while at a St James liquor store in April.

He said while tragic, Williams’ death was a reminder of the importance of making the right decisions and thinking for himself.

“I was sad for a while. I would just think about it, but I eventually overcame it. It really made me think about what I had and I didn’t want to take any of my opportunities for granted.

“Friends aren’t everything. Your parents are everything, they won’t ever lead you astray. That can happen unfortunately with friends sometimes, so it’s important to know this because a lot of youths tend to get carried away.”

An aspiring businessman, he said while most secondary school football players were focusing on developing their athletic skills with the hopes of having a professional career, Ayres said he was more realistic in his approach and realised that even with his talent, there was need to think about his long term development and often encourages his peers to do the same.

“The future isn’t guaranteed to anyone. There are new players coming out every year and despite how much skill or potential you have, an accident or an injury can happen and your athletic career is gone, so I always advise my friends to take their academics seriously.”

Sunday Newsday spoke with Ayres’ father, Devon Ayres who also grew up and trained under the guidance of Michael Paul.

The elder Ayres said while he did his best to instill values of discipline, resilience and humility in his son, he said his success and achievements both on and off the field were largely due to his own dedication and selfless work ethic.

“He usually has a very strict regime that he follows six days a week. I’ve done my best to coach him and give him pointers during his training sessions and so on, but a lot of it is really due to his own need to be the best. He’s a real warrior.”

Ayres said while he continues to support his son, he wishes other parents in the community could do the same with their own children, lamenting that while coaches like Paul and teachers would do their best to nurture talent and potential, it was ultimately the responsibility of parents to be there for their children.

“It’s something you don’t see a lot of. Even with his schooling, he (Fabien) knows I don’t make joke about that. He goes to lessons, he goes to school and then he gets to play football. I take him seriously.”

The younger Ayres is hopeful that he would be recruited by Florida State University when he gets older and develops himself further.

More than just it’s athletic programme, he is eager to be part of some of the business and entrepreneurship classes they offer and dreams of opening up his own retail store one day.

Some may say this is a too far ahead as he prepares for CSEC examinations next year, but for the 15-year-old student, nothing is too far away as he seeks to claim his own legacy as more than just a footballer.