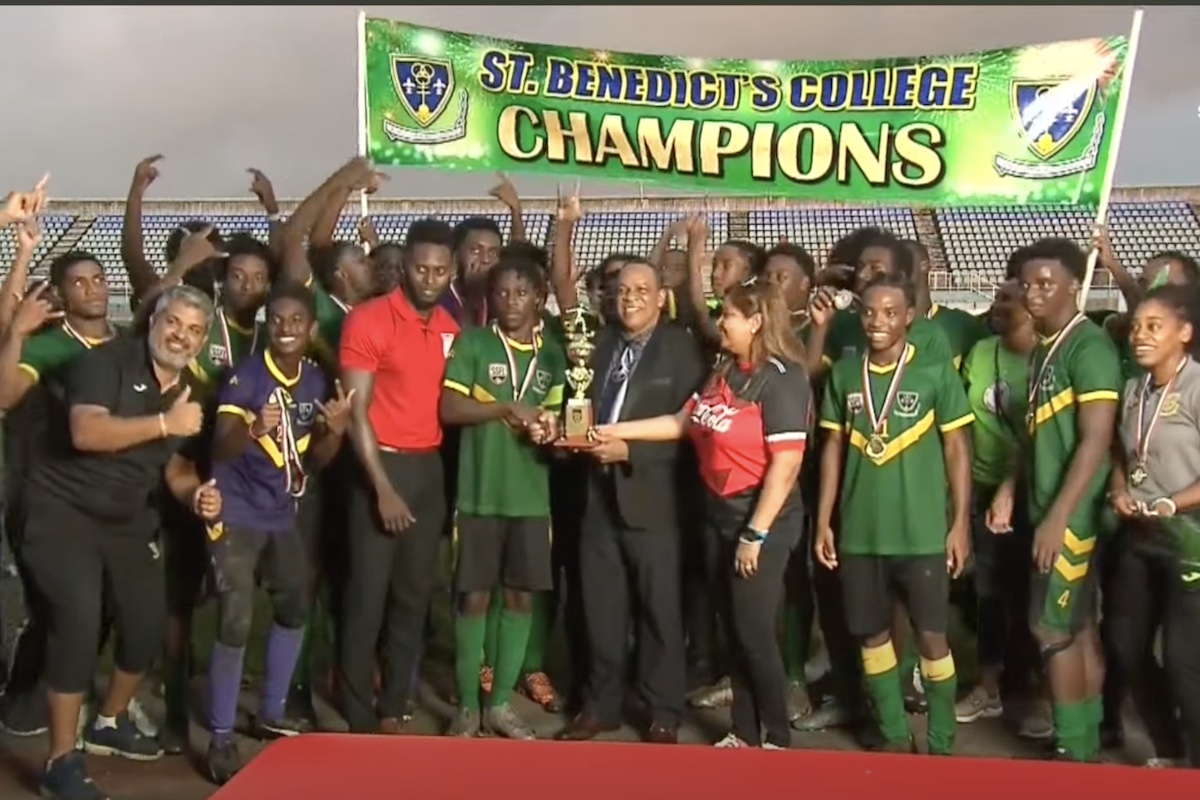 THE South Zone of the Coca-Cola Intercol competition has a new champion, after St Benedict’s College defeated Presentation College (San Fernando) 4-3 via kicks from the penalty mark, to end a tense affair at the Ato Boldon Stadium, Couva on Friday afternoon.

St Benedict's College, the SSFL Premiership champions, are now in the hunt for the national Intercol crown – their third title of the season.

Going into the match, Presentation College were enjoying a three-year reign – owing to the pandemic – as defending South Zone and national Intercol champions.

The "Battle of the Lions" was hyped as both sides had high-scoring games in the previous rounds. However, the two prides cancelled each other out.

In a match of few highlights, the game ended 0-0 at the end of regulation time.

Prior to the final whistle, though, Presentation goalkeeper, Kanye Lazarus, kept up his excellent form in the competition as he pulled off a string of impressive saves to keep the score level.

Presentation had the game’s best chance in the 54th minute when Dantaye Gilbert squared the ball into the penalty area but Levi Jones wildly skewed his shot wide from point-blank range with St Benedict’s goalkeeper, Ja-ar Buckmire, stranded.

In the latter stage of the game, St Benedict’s applied heavy pressure upon Presentation’s defence through Jeremiah Niles, Nicholas Bobcombe and Derrel Garcia. However, Lazarus consistently made himself big on every occasion to deny the flamboyant attackers in green.

After four minutes of stoppage time, referee Kwinsi Williams blew his whistle and sent the teams to the decide the final from the penalty mark.

St Benedict’s Nesean Alexander successfully opened the shootout, blasting the ball into the bottom-left corner. Captain Dantaye Gilbert then saw his penalty saved by Buckmire as Presentation went into the next round of kicks at a disadvantage.

In similar fashion, Tarik Lee was denied by Lazarus and Maitland-Wilson capitalised on Lee’s miss to make it 1-1 after two kicks.

Josiah Ochoa put St Benedict’s back in front before Levi Jones kept the score level at 2-2.

The La Romaine Lions then retained their lead via Keanu Morean but Duhrell Young confidently silenced the green and yellow celebrations with a clinical finish past Buckmire.

With one kick remaining and the scores tied at 3-3, Ephraim Brown stepped up for the La Romaine Lions and calmly converted his penalty to put immense pressure on their fierce rivals.

Striker Caleb Boyce, who was one of Presentation’s best players this season, took the responsibility for the fifth kick.

Deservedly, the St Benedict’s goalkeeper was named Man of the Match by SportsMax and Coca-Cola for his excellent performance both in regular time and in penalty kicks.

In his post-match interview, the shot-stopper said, “The game was a well-fought game, to be honest. It was very intense; very anti-climactic. I feel very excited! Thank God for the win and we’re looking to move forward from here now.”

Speaking about the penalty shootout, he said that he was “very confident” because of his time on the training ground.

“I normally save about three penalties in every practice, it wasn’t a mental struggle for me.

"I was very comfortable and was able to show what I can do.”

Winning coach, Randolph Boyce, was elated in his post-match comments, “It feels great. The feeling is wonderful. I’m glad for the players – they’ve been working hard all season; putting in the work.”

“The (Presentation) coach did some tactical adjustments. They played a low block and very compact, so it was difficult to unlock those doors today. But we kept playing.”

He added, “If football continues like this, it could only be good for Trinidad and Tobago.”