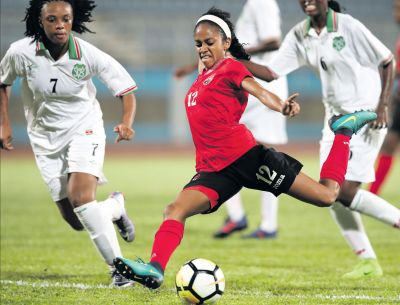 Summer Shanelle Arjoon will be aiming to come good once again for T&T senior women’s team when it faces Grenada today in its second match in the Caribbean Football Union (CFU) Women’s Challenge Series at the Ato Boldon Stadium in Couva from 6.30 pm.

This after Arjoon netted a pair of goals in the fifth and 46th minutes to lead T&T to a convincing 7-0 victory over Suriname on Wednesday night at the same venue.

T&T rushed into a 6-0 lead prior to half time as the Dutch-speaking nation struggled to deal with their more experienced and technically better opponents in the second outing of the evening.

Guyana and Grenada had earlier played to a scoreless draw as Group C opened at the TTFA Home of Football.

“All in all I was pleased with the effort and the fact that we scored seven goals but I do not think it was a very strong Suriname team tonight,” head coach Jamaal Shabazz said after the win.

He did however, express concerns about the team’s drop in performance after changes were made in the second half.

“I thought they gave a lot of room on the sides of the field and we made use of it early in the game. But the worrisome thing is when we took out three of the veteran players, Tasha St Louis, Karyn Forbes and Ayanna Russell, I think we lost our way a bit and this is worrying when you look at the depth we are trying to create in the team. All in all, I am pleased that we scored seven goals today, but far from making cartwheels and jumping for joy,” Shabazz added.

In today’s other match, Guyana meets Suriname from 4pm.