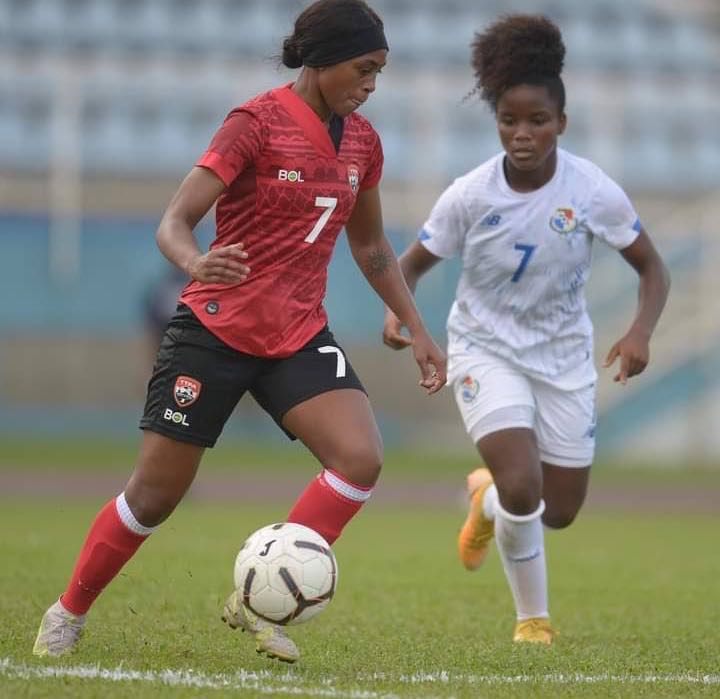 TRINIDAD AND TOBAGO women’s senior team made a welcome return to competitive football with a goalless draw against Panama at the Ato Boldon Stadium in Couva, on Thursday.

Neither team could break the deadlock after 90 minutes but T&T were still able to hold off the visitors after over two years of no competitive football.

Panama dominated the opening half and came close to scoring when striker Marta Cox struck the top left of the crossbar. Luckily, the ball fell within reach of T&T custodian Kimika Forbes.

In the second period, T&T looked better and were able to string together more passes than in the first half.

Panama however, came close to scoring twice via substitute Yamileth Palacio but Forbes came up big although the defensive backline looked a bit shaky.

Thursday’s match was also newly appointed interim coach Kenwyne Jones’ first game with the team after he took up the role on Monday.

T&T play Panama once more in another friendly on Monday at the same venue from 3.30pm.

RUSTINESS showed but there were glimmers of positivity when the Trinidad and Tobago women’s football team returned to action after a two-year hiatus and drew goalless against Panama in a welcome international friendly match, at Ato Boldon Stadium, in Couva, on Thursday.

Under cloudy skies and a thick cover of Sahara dust, the Women Warriors braved the elements to churn out a fair result. Panama looked better composed in the opening 45 minutes but the T&T team bounced back to deliver a more dominant display in the second period.

After the match, newly appointed women’s interim head coach Kenwyne Jones was pleased with the team’s performance. Although there were a couple of individual and tactical errors during the match, Jones commended his players for showing resilience against a tough Panama unit.

“After not being an active team for two years, I think the team performed really well. Of course, there are instances in the game where Panama caused us a few problems but I thought that the team was very resilient and dealt with it well.

“It’s the first game for such a long time and we have a long way to go. I think from here we can only expect a lot of progression,” said Jones on his national coaching debut.

In the first half, the visitors came close to scoring when striker Marta Cox struck the top left of the crossbar. Luckily, the ball fell within reach of T&T custodian Kimika Forbes.

Forwards Kennya ‘Yaya’ Cordner and Raenah Campbell had few attempts in the opening half and midfielder Maylee-Attin Johnson tried valiantly to champion the midfield.

The national team showed some threat at times but ended the first period without a shot on target.

In the second half, T&T looked better and were able to string together more passes and generate more chances in front of goal. Defenders Rhea Belgrave and Lauryn Hutchinson had to work overtime as Panama also pressed for the opening goal.

They were almost rewarded twice courtesy of substitute Yamileth Palacio but Forbes came up big on both occasions.

A defensive error by Victoria Swift in the last 15 minutes saw Panama come close to scoring but again, Forbes was there to clean up.

However, the Women Warriors would survive a late charge for their Panamanian counterparts and now recover and recharge for Monday’s second friendly match against the Central Americans.

Jones commended Forbes and the entire team on an improved performance in the second half.

“She’s (Forbes) has been a really strong presence for the team. When she makes saves as she does and commands the box like she does it gives the team the impetus to keep going. You can see the energy passing on from her to the defenders onto the midfield.

“Today we fought really hard. We dug in. The surface was really heavy. Amidst the situation of players coming in late, travel situations I think we did really well for a team that has trained together for the last couple days,” he added.

Although the team changed two coaches in the past two weeks, the newest appointed, Jones, said the squad still entered Thursday’s match with good fundamentals.

On October 6, ex-national women’s coach and Welshman James Thomas resigned for a job in the English women’s league.

“They had a really good foundation over the last few months and today was just the first test to see where we’re at in our preparation,” he added.

The Concacaf women’s qualifiers were initially scheduled to be held in November but owing to the pandemic, it will now be held in February.

Jones believes the additional time augurs well for the team to use the coming months to better prepare themselves ahead of international competition.

He added that there are still several foreign-based players who were unable to join the team this time around. Jones thinks that if he has all options available, the team would deliver a better showing.

“The good thing is the qualifiers have been pushed back to February so it gives us more time to keep working and to get better on a lot of things that we do.

“We have a lot of players still that can potentially come and strengthen the squad. I don’t think that we would qualify for the World Cup with just 24 players.

“There are a lot of players out there that are willing to come and play for T&T and they would add value to the rest of the squad,” he said.

Looking to Monday’s game, the new coach confirmed that there will be some changes to the starting 11.

He plans to hold a light training session on Friday and will then sit down with his coaching staff to assess who plays in the second friendly.

Tactically, he said, the team is still learning.

“I think it’s something new (tactics) that we’re implementing in the squad today. We have a lot to work on. The system is not perfect yet.

“The players need to build a better understanding of it. I think in the future it is going to work well based on the players again that have the potential to come in the squad.

“Once we’re able to continue to practise and get games to play before the World Cup I think it will do us very well,” he closed.

WOMEN Warriors Victoria Swift and Rhea Belgrave were pleased with the team’s opening performance against Panama at the Ato Boldon Stadium in Couva, on Thursday, in their first international friendly match in over two years.

T&T drew 0-0 but both players were happy the team did not return to the competitive circuit on the losing side. They were also led into battle by newly appointed interim head coach Kenwyne Jones, who only took up the role on Monday.

“Being the first game that we played together in a really long time I think the team really fought hard. Even though the result we wanted was a win, a draw is pretty decent for the first game,” said Swift in the post-match interview.

With players coming from different playing systems and having to quickly adapt to a new system under Jones, Swift thinks the team did well to hold their own.

On acclimatising in such a short time frame, Swift said it had a lot to do with players having the experience, fight and desire to do well.

“I think we did really well coming together in such a short space of time. We first just need to focus on recovery and as a team, talk about our positioning and our formation and go from there to the next game,” she said.

Additionally, defender Belgrave welcomed an anticipated return to competitive football after such a lengthy delay, most of which was owed to the pandemic.

“For me, it’s been more than two years (without national team football). It felt really good hearing the anthem and getting back into things. We had to adjust a lot to the new system and getting used to the movements and so forth,” she said.

Belgrave also commended goalkeeper Kimika Forbes for executing some critical saves in the second period to keep T&T in the game. She believes the squad has what it takes to produce a winning result on Monday.

“I definitely think we can win. We’re going to go back and watch the team and see where we can improve on.

“We just try to stay positive. The goal is to qualify (for the World Cup) and not everything is going to be perfect so for us it’s for us to try to stay focused on the qualifying and control what we can,” she added.