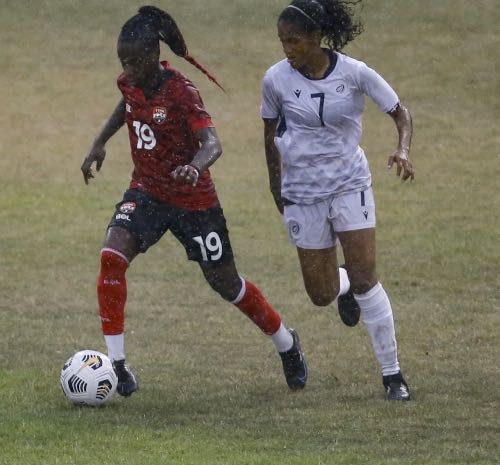 T&T Women footballers and their Dominican Republic counterparts played to a 1-1 tie on Tuesday in game-two of their international friendly series at the Estadio Panamericano in San Cristobal in the Dominican Republic.

However, the T&T team was unlucky not to concede another late item as they did in the opening match when Forbes went down awkwardly under a challenge from a right-side corner by Winibian Peralta. And when the ball rolled invitingly for Vanessa Kara, she drilled it back in for Alyssa Oviedo to simply touch the ball into the open net, but Kara somehow redirected the ball wide in the 76th minute.

That effort confirmed the 1-1 result (View Full Match Here), although both teams traded attempts at goal in the moments that followed.

The T&T girls were hoping to rebound from a last Friday's 1-2 loss and got a decent start with a possession game that should have resulted in at least a shot at goal. During an early build-up, Maylee Attin-Johnson threaded a ball through to an unmarked Raenah Campbell in the Dominican Republic defence, but her control let her down.

Lucia Marie later stormed down the right flank in the 18th minute and her centre was spilt by Forbes, pushing Marie's cross into the path of Manuela Lareo who took aim but her shot was deflected wide.

However, T&T got the opener in the 21s minutes. Liana Hinds delivered perfectly from a right-side corner for Maylee Attin-Johnson to rise unchallenged and head goalwards, but her attempt was cleared only as far as Rhea Belgrave who headed in from two feet away.

Kenwyne Jones' charges survived a number of attacks in the latter moments, including a solo attempt by Lareo, dribbling inside the T&T area on the right side, but with the goal at her mercy, she lashed it wide on the stroke of halftime.

The game lasted just eight minutes when the game resumed for the home team to get the equaliser. Kara received a pass from Oviedo inside the area and the skilful Dominican Republic player lifted it inside for Oviedo to head past the T&T custodian in the 48th minute.

But Forbes, who struggled with the cross balls, was again in action, going high to push out a well floated right-side corner in the 59th minute.