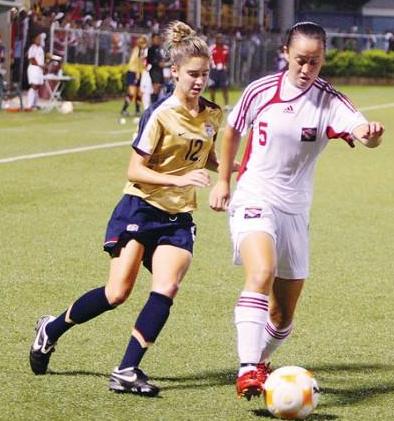 She has been highly rated by National Women's coach Jamaal Shabazz and she's displayed a passion and competence that has won her  a fair amount of admiration from her teammates and fans.

We get up close with Canadian-born utility player Arin King who is a past  member of the T&T U-17 and U-20 team and was also instrumental in helping the Senior Women's team advance in the Caribbean Gold Cup qualifiers as well as book a spot in the 2010 Central American and Caribbean Games.

Born February 8,1991, she was also part of the Canada's National U-17 team training camp in 2007 in Ottawa and won a bronze medal with Ontario at the 2007 BMO Financial Group U16 Girls National All-Star Championship. She was born in Scarborough, Ontario an is also carries the nickname "Sparky". Arin currently attends the University  of Toronto.

Arin, in a nutshell, how would you sum up your experience as a T&T Senior Team player thus far?

My experience with the T&T Senior Team has been amazing. I’ve been privileged to meet many new people and gain knowledge about the game from teammates and a great coaching staff.

How has the transition been coming from Canada to Trinidad? And from the U20’s to the Senior’s?

In respect to the transition from Canada to Trinidad it was hard to adapt from cold weather to the blazing hot sun but I can’t complain, who doesn’t enjoy nice warm weather right? But I feel I have made a comfortable transition from the U20’s to Senior. The Senior team definitely trains with a lot more intensity and there is lot more understanding for the game so I really had to come to training prepared.

Were your surprised when you were asked to play as a forward vs Barbados? How did you prepare yourself mentally for that game? What was the secret behind your hattrick? You were seen running to retrieve the ball after T&T's last goal? Why? Was it because you saw the need for something else to happen in the game after that goal?

I was a little surprised that I was asked to play striker against Barbados because I have always played on defence for T&T but I took the opportunity to prove that I can be a very versatile player. To prepare for the game I really just visualized the match. I thought about all the roles the striker performs on the field and thought about coaches expectations for me, position wise, for the game. And there’s really no secret behind my hat-trick. I just happened to be at the right place at the right time.

I would’ve felt happy just to score one goal for my country. I retrieved the ball after our last goal because it was really important for us to go into our last match against Guyana with as much goals as possible because they had a higher goal difference than us. But at the end of the day we showed that we were a much better team than Guyana so the goal difference really didn’t matter.

How have you been able to balance the academics with the football?

At one point I actually had taken some time off school because I was travelling so frequently to play football with the U20’s and as well as the Senior team. I had even missed some summer classes for the CFU games just recently. However, it’s all about prioritizing your schedule and time to be able to stay committed to your passion in life but still concentrate on getting a good education.

What are your aspirations away from the football pitch? And on it as well?

Off the football pitch I aspire to finish schooling and to be able to travel the world. And on the pitch, like any other footballer, I truly wish and have the dedication to reach a World Cup with the National team. That would truly be an experience of a lifetime.

Any idols who keep you striving?

Honestly, without my parents I wouldn’t be where I am today so they keep me striving to be better as a person and player.

How Excited are you Arin about the chance to play at the CAC Games and Gold Cup and possibly even come up against Canada?

Unfortunately, I will not be able to play at the CAC games because I have school but I am really excited to play at the Gold Cup with this team. At  the Gold Cup we will come across better teams that will give us a run for our money, so I’m really looking forward to how we will handle the pressure and come out victorious. And T&T’s win against Canada will just make our Gold Cup experience that much better.

My Mom was born in Trinidad but moved to Canada when she was young, so I am able to play for the Trinidad and Tobago National team because of her. Football wasn’t the first thing that brought me to Trinidad. I’ve been coming here to enjoy the Island and Carnival since I was one year old, the addition, playing football has just made coming here that much better.

Thank you and best wishes from all of us.