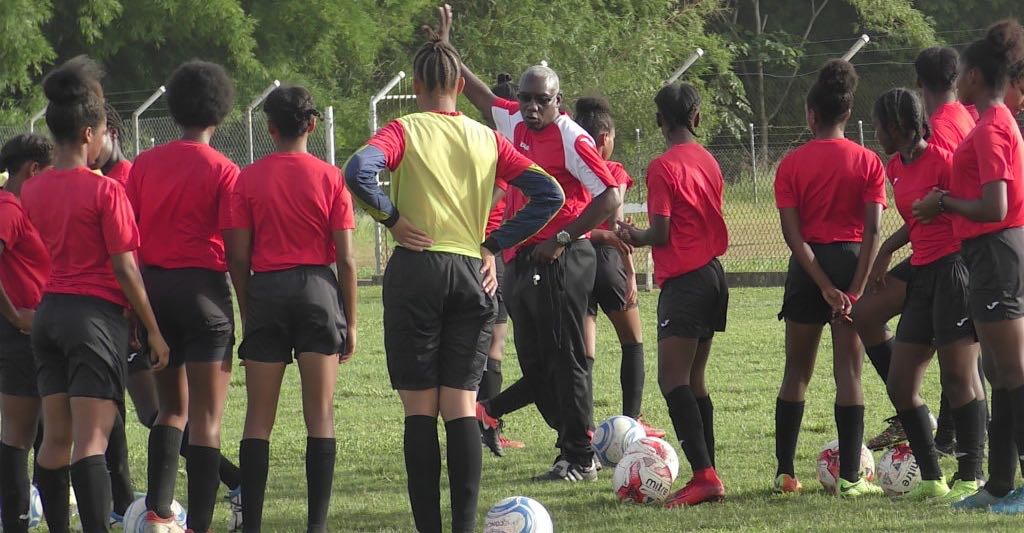 THE national Under-15 girls footballers and technical staff are keen to move on from the indignity of missing the CONCACAF Under-15 Championship at the IMG Academy in Bradenton, Florida, United States.

The team was unable to compete at the Championship,which began on Monday and runs until August 13, due to their inability to get visas from the US Embassy.

Team coach Marlon Charles, in an interview last evening, commented, “The coaching staff and everybody are disappointed because these kids have worked very hard to reach to this point to represent Trinidad and Tobago. I know how much we want it. This is where the learning and the education would have taken place on the football field.”

The veteran coach added, “We have spoken to the girls, they’re ready to roll but they’re disappointed. It’s not an easy situation.”

Charles selected his team for the CONCACAF event on July 30.

But the TT Football Association (TTFA) was given an appointment date of August 28, well beyond the conclusion of the tournament.

Concerning the issue with the travel documents, Charles, who is also the assistant women’s coach, replied, “It just didn’t happen for us, getting the visas for the kids. That’s something we need to probably next time see how it works better.

“Normally it happens all the time, teams going to travel, they go into the Embassy and they get their things,” he added.

According to Charles, “There is always a procedure that used to happen all the time, you go into the Embassy and expedite things; that has been going on for years. I don’t know what’s the difference now. I can’t say much about that situation. I know where we are but we’re trying now to see what can happen next.”

Asked when the travel documents were sent to the US Embassy, Charles replied, “Even if you send it (on) Monday, they will give you an appointment time, from (there) you can get it expedited to help out a situation, which normally happens.”

Did he think CONCACAF should have intervened to get the visas expedited? Charles responded, “I’m not sure about that, I can’t say. In a situation like this, they’re supposed to step up, but I wouldn’t say something (that) I don’t know.”

The efforts of the Trinidad and Tobago Women’s National Under-15 Team players over the past year and a half ended on an anticlimactic note today, as Concacaf withdrew its invitation for the young Women Soca Warriors to participate at the confederation’s 2018 Women’s Under-15 Championship in Florida.

Trinidad and Tobago Football Association (TTFA) technical director Anton Corneal confirmed that Concacaf gave the two island republic until noon today to sort out its travel issues. And it meant the end of that particular journey for the players.

“Concacaf said that if we could not get anything by midday today, they will have to organise the groupings without us,” Corneal told Wired868. “There is nothing we could have done. We don’t have control over the situation at the [US] Embassy.”

Trinidad and Tobago were supposed to play Bermuda from 9am today at the IMG venue in Florida. However, despite knowing about the Concacaf tournament two years in advance, the TTFA failed to get visas in time for the trip.

Head coach Marlon Charles selected his final squad on Monday 30 July with Trinidad and Tobago’s first game carded for a week later on Monday 6 August. Manager Vernetta Flanders then had to get visas and plane tickets for the entire contingent within that time frame in the middle of the school vacation.

Flanders did not get past step one, as the US Embassy gave the TTFA an appointment date of 28 August and refused to budge. The Concacaf Women’s Under-15 Championship ends on 13 August.

“As of this afternoon, the Embassy has declined our requests from all avenues we have tried to get an early visa appointment,” said TTFA general secretary Justin Latapy-George, “from the Ministry of Foreign Affairs all the way through to Concacaf… We did everything we could do but they have been unable to facilitate an earlier appointment.

“I am very disappointed but we are out.”

Latapy-George suggested that the TTFA followed “normal procedure” in trying to get the women’s team to Florida but were thwarted by the heavy volume of work engaging the attention of the US Embassy staff at present.

“From the information before me, we have done nothing differently to what we always do, and our requests would usually be facilitated,” said Latapy-George. “My understanding is that they had a huge request for visas and we could not be facilitated. We have followed the same process we have [done] every single year.”

Visas were unlikely to have been the only problem for Charles’ team. The Trinidad and Tobago Boys Under-14 Team also ran into problems, as they tried to get to Curaçao for their own Caribbean Football Union (CFU) competition.

In the end, the TTFA was forced to charter a plane which got the team there with barely 12 hours to spare before their opening fixture, which they won 8-0 against Guyana.

If the US Embassy had facilitated the women’s team, the TTFA would still have had the challenge of getting them to Florida.

It meant for a chaotic start to international competition for Trinidad and Tobago’s first teams from the TTFA’s $10 million National Youth Elite Programme, which benefitted from a record TT$8 million sponsorship deal from the National Lotteries Control Board (NLCB).

At the launch of the Elite Programme on 14 October 2016, TTFA president David John-Williams said the boys and women’s teams would play “one friendly international game every two to three months.”

However, after a year and a half, the Boys Under-14 Team had their first international game on 4 August 2018 while the Women’s Under-15 Team just lost their first opportunity to wear national colours in battle.

Gary St Rose, a former W Connection official, is the TTFA’s coordinator for the Elite Programme. However, he did not want to speak about the programme that he is paid to run either; and advised Wired868 to refer all questions to the local football body’s press officer.

Wired868 suggested that the Trinidad and Tobago’s forced withdrawal from a Concacaf tournament—an act that is often followed by sanctions—was beyond the remit of a press officer and asked St Rose to field questions on the matter.

St Rose did not respond. Wired868 was also unable to reach Charles or Flanders.

Latapy-George said that, although Charles would have significant say on the topic, he suspects that the next move for the Under-15 Women would be to start preparing for the CONCACAF Under-17 competition in roughly two years’ time.

In the interim, the football body is likely to follow Corneal’s advice and seek an audience with the US Embassy, in an effort to avoid a repeat of this year’s catastrophe.

“We need to engage the US Embassy to find out the dynamics involved in getting a team there for competition,” said Latapy-George. “I am not trying to take away from their sovereign rights regarding visa selections; but, as you would appreciate, most coaches would not make that decision on which players are going to a tournament, more than one or two weeks before a tournament.

“So it is about engaging the US embassy to see what can be done in the future. Maybe this was a misnomer; I don’t know.

“[…] It is not a pleasurable situation for everybody [because] these young girls have been working very hard and these kinds of opportunities are needed to measure where they are.”

While Trinidad and Tobago’s young ladies missed out, Antigua, St Kitts and Nevis, St Lucia, St Vincent and the Grenadines, Grenada, Dominica, Haiti, St Lucia, Barbados and Jamaica were among the Caribbean islands who successfully got visas and flights to Florida to participate in the Concacaf tournament, which kicked off this morning.