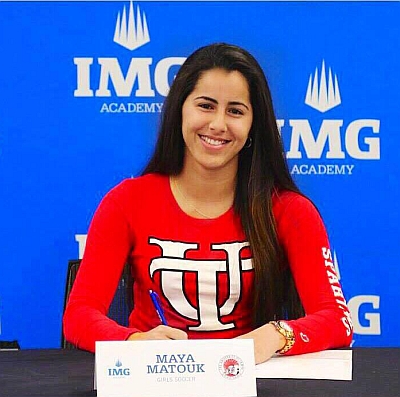 Former national Under-17 women’s player Maya Matouk will be embarking on a new phase in her career this year after being accepted to the University of Tampa.

Matouk officially signed on with the University having impressed during her tenure at the IMG Academy in Florida. She is among eight student-athletes signed by Tampa a few days ago for the Class of 2015.

Matouk, who played for St Ann’s Rangers in the local Women’s League, said she was thrilled over her Tampa ticket.

“University of Tampa was one of my top choices to study business because they offer a great programme. While visiting for a weekend to try out for the team I was impressed by the welcome I received from the Coach and the players. I felt extremely comfortable and knew that the Coach would encourage me to improve my game tremendously,” she said.

The former St Joseph’s Convent student and ex-member of the La Foucade Coaching school said that she has ambitions of representing T&T again but also has her sights on furthering his academic qualifications.

“My major is business and finance. I always loved studying business in High School and I’m looking forward to learning more in this field. Football is my passion and I would love to play to the highest level of my ability....I will be proud to put on my T&T jersey and represent my country.

The feelings and emotions that I felt when I walked on the field at the Concacaf tournament will live with me forever. My love for my country and my love for the game will make it a pleasure to represent T&T.”

Matouk said playing for T&T at the U-17 level where they captured the Caribbean title in Haiti in 2013, prepared her for her move to IMG which holds one of the United States’ top development programmes. She also credited her parents Michael and Paula for spurring her on both on and off the football pitch.

“Playing for the U-17 team was a privilege and I am thankful I had the experience to travel with them. Playing against teams like USA and Canada opened my eyes to the level of football out there, so I knew what I was going into when I entered IMG Academy.

“There were quite a few changes as I was not accustomed to lifting weights as often and my daily training sessions were tougher and longer. We travel to play friendly games on most weekends as well as competitive games. I am thankful I was able to get this opportunity before heading to University,” she said.