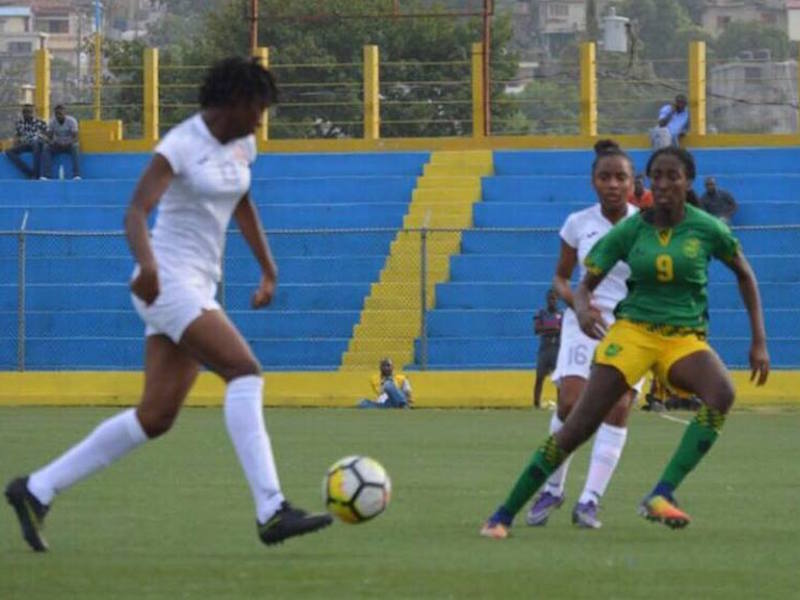 PORT-AU-PRINCE—T&T was sent packing from the Caribbean Football Union Under-17 Girls Championship after a 3-1 loss to Jamaica in a must win final Group F match at the Stade Sylvio Cator, Port-au-Prince on Friday night.

Coming off a 2-2 draw with Bermuda in their opener on Monday, the T&T girls needed a win to at least reach the third place play-off for a chance to advance to the Concacaf Under-17 Women’s Championship.

However, the young ‘Reggae Girls’ also needed to a win after falling to Bermuda 2-3 on Wednesday and led by two goals from Olufolasade Adamolekun, they came from behind to beat T&T.

T&T went ahead in the sixth minute through Aaliyah Prince, but Jamaica drew level on the half-hour courtesy captain Monique Perrier. Adamolekun fired the Jamaicans ahead in the 69th and five minutes from full-time she added another to seal victory and second spot in the three-team pool with three points, one behind group winners Bermuda while T&T ended with one point.

In Group G, host Haiti blanked Cuba 3-0 to end with a maximum six points after a similar margin of victory over Puerto Rico, which ended second with a 4-0 trashing of the Cubans.

Today, Bermuda and defending champions Haiti will meet in the CFU final with both teams already qualified for the Concacaf Championship while Jamaica and Puerto Rico clash for third spot, with the winners earning the third and final CFU spot.

U-17 Women eliminated from WCQ series after 3-1 loss to Jamaica
Wired868.com.

The Trinidad and Tobago Women’s National Under-17 Team was dumped from the Uruguay 2018 World Cup qualifying series without even facing CONCACAF opposition. The junior Women Soca Warriors were eliminated after a 3-1 loss to Jamaica today at the Stade Sylvio Cator in Haiti.

The result meant Trinidad and Tobago finished bottom of the Caribbean group, behind Bermuda and Jamaica. The Jamaal Shabazz-coached team failed to win any of their last three matches with two draws against Grenada and Bermuda preceding tonight’s loss.

Trinidad and Tobago attempted to play off the counter attack and got a dream start as star forward Aaliyah Prince put the junior Women Soca Warriors ahead after four minutes.

But, according to the TTFA Media, Jamaica were easily the superior team and pinned Trinidad and Tobago back in their half. The “Reggae Girlz” hit the post on two occasions before striker Monique Perrier equalised, after a blunder by Trinidad and Tobago goalkeeper Makeda Herbert.

Tied at one-goal apiece at the interval, Jamaica eased away in the second half courtesy of a Olufolasade Adamolekun double to seal a play off spot against Puerto Rico.

“I am disappointed that we are not able to continue our World Cup journey but it was definitely a game where we played with heart and determination,” Trinidad and Tobago midfielder Kara Trotman told the TTFA Media, “and it hurts that our efforts weren’t reflected in the final score.

“We have learnt a lot from this tournament and hope the program continues so we can really benefit from this experience.”

It was a bleak return for the women’s programme, which seemed to be set for take-off in January when the Trinidad and Tobago Football Association (TTFA) hired vaunted Italian coach Carolina Morace and a foreign contingent that included assistants Nicola Williams, Elisabetta Bavagnoli and Manuela Tesse. The overall package of the women’s coaches was rumoured to be US$24,000 per month.

Tesse, the Under-17 head coach, quit the programme in May while Bavagnoli was also quickly conspicuous by her absence.

Morace and Williams finally downed tools in July after the alleged non-payment of salaries by the David John-Williams-led football body.

“The right terminology is,” Morace told Wired868, “the contract [is] terminated for just cause.”

Still, the National Under-17 Team had been together since March and participated as a squad in the local WOLF competition.

But, even with two North America-based players—midfielders Sarah De Gannes and Trotman—in their line-up, Trinidad and Tobago could not even get to the semi-final round of the Caribbean stage.

After their 2-2 draw with Bermuda on Monday, Shabazz suggested that his team was not good enough.

“It is clear that we are a step or two behind the teams in this tournament,” Shabazz told TTFA Media. “It is our ability to stay organised and [our] grit and determination that is keeping us in the game. Where their legs ran out in this match, they applied their hearts and we were able to get a point.”

Trinidad and Tobago have now failed to qualify for two successive CONCACAF Women’s Under-17 Championships under the David John-Williams-led TTFA—despite being Caribbean champions in 2013. The two-island republic were also eliminated at the Caribbean stage of the Men’s Under-17 competition in 2017, despite being the host nation and having previously qualified in 2015.

Trinidad will host the 2018 CONCACAF Women’s Under-20 Championship from 18 to 20 January.