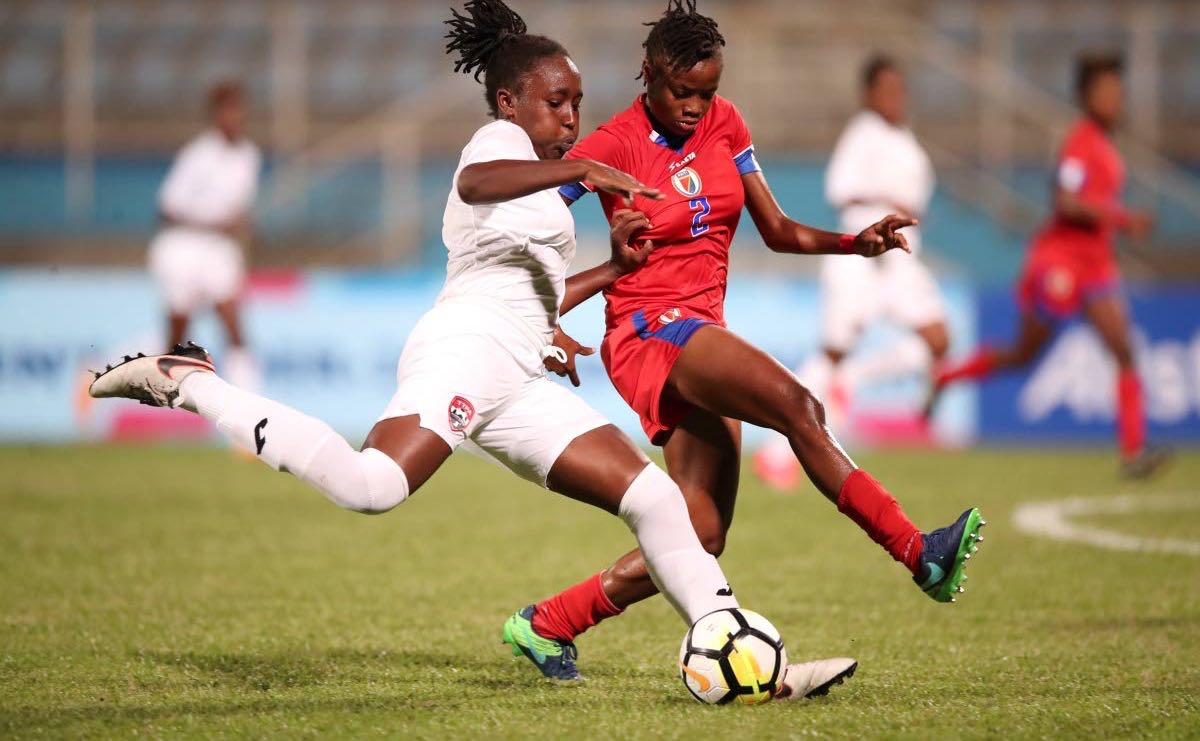 Trinidad and Tobago Under 20 Women’s head coach Jamaal Shabazz was an understandably disappointed man on Thursday night as his team surrendered a two-goal lead in what he described as  “dream star” in a 3-1 defeat to Haiti in Group A action at the Ato Boldon Stadium as action got going in the Concacaf Under 20 Women’s Championship.

“I think we had a dream start going two goals up but we lost to a more skillful, fitter, more aggressive Haiti team tonight,” Shabazz said in the post-match press conference.

“I think the girls gave an effort and certainly the Haitian team was a lot more aggressive, much  stronger and all in all this is reality. I think when they equalised they totally took over the game. In the second half we fought a little bit more but it was always gonna be a tough game against this Haitian team, it was never a walk in the park, it was always an established contest and all in all we’ve got to keep our heads up and come back fighting against Canada,” he added.

Asked how his team would correct their mistakes from the first game when they go into Saturday’s second match against Canada which defeated Costa Rica 3-1 earlier on Thursday, Shabazz responded:“

“We cant make magic in one day, the one day we have is to recover and recuperate for the game against Canada. Certainly having tasted the level of aggression and urgency in the game I think it will fire our girls to come out even harder against Canada”

“Well I think our players are hungry for it, they were very surprised by the speed and aggression of this Haitian team. I mean this was a very skillful, aggressive bunch and we cant take anything away from them and they outplayed us tonight and we cannot take anything away from them. I think our players are honest with themselves and they know we’ve got to come back against Canada and try our  best. Obviously we’ve got to swing some players around as we picked up a couple injuries tonight. We’ve had some good individual  performances and then we had some bad individual performances in the defence as well.”

“Certainly I think we will be, we had to swing them around tonight and at one time we played with three at the back,” Shabazz said in reference to whether his team will need to be rotated.

On Haiti scorer Nerilia Mondesir and whether T&T failed to deal with her as required on the evening, he added: “Well I think the individual received the ball from somewhere, you know, I don’t think any team at this point try to play man to man on any one player. She did well and she is one of the top players in the tournament.”

“Well for me I can’t get frustrated with the team, we continue to work and I think we came up against a top class striker and it’s one of the learning curves they will have to undergo. This player is a good player. Our strikers didn’t do badly as well eh, we saw Laurelle Theodore coming on and being a handful  but all in all I thought they came up against a very good striker and it was a learning curve for all  the defenders.”

T&T’s Soca Princesses suffered a 3-2 defeat to Haiti in their opening match in Group A of the Concacaf Under-20 Women’s Championship at the Ato Boldon Stadium in Couva last night.

Dennecia Prince stormed down the right flank but her attempt to cross was blocked by Napthalie Northern in the fourth minute, but the ball rolled invitingly for her to fire a low left-footer into the far right corner of goalkeeper Kerly Theus for the opener.

Haiti however missed a golden opportunity to equalise when inspirational striker Nerilla Mondesir failed to direct her header on target when she was picked out unmarked from a rightside cross.

Instead the crowd was lifted to its feet when Kedie Johnson skilfully curled the ball past Theus leaping high in the air from a right side corner for the host second goal.

Despite their opening goals, however, the local girls failed to show organisation in both attack and defence, which the visitors enjoyed more on the night. And it was Mondesir who pulled a goal back after tormenting the T&T defence all night long, after she was served a pin-point cross from the right that she headed past goalkeeper Klil Keshwar in the 26th.

Four minutes later, Mondesir had only herself to blame for not equalising. The nippy striker out sprinted the T&T defence before going past Keshwar, but with the goal at her mercy, she lost her footing and failed to turn the ball into an empty net.

But she made amends for her earlier missed chance on the stroke of half-time when she collected unchallenged inside the T&T area before calmly slotting the ball past the on-rushing Keshwar for the equaliser.

After the break Mondesir gave the Haitians the lead for the first time, again using her pace and skill to get past her marker Shadi Cecily Stoute and then skipper Natisha John before blasting past Keshwar in the 54th minute. Keshwar would later keep out other attempts from Roseline Eloissaint and Keshwar in the remaining minutes.

T&T will now turn its attention to its next opponent which is Canada tomorrow.

Meanwhile, action continues today with Jamaica facing Mexico in the opening game at 4pm, while the USA will begin their quest for World Cup qualification against Nicaragua from 6:30pm.

In the opening game Canada came from a goal down to whip Costa Rica 3-1 courtesy a double from striker Jordyn Huitema.

Costa Rica opened the scoring in the 28th minute from Catalina Estrada who capitalized on the defensive blunder by Ashley Cathro by firing a low rightfooter past Rylee Foster which took them to the half with a 1-0 advantage.

The Canadians equalised soon after the break from a neat build up that sent Huitema galloping through from a lofted through ball in the 48th minute.

In the 53rd minute Huitema’s initial attempt from the spot kick was save but managed to fire in the rebound and then she completed the scoring in the 65th. Fabiana Solano scored for Costa Rica in the 57th.

In the second match of the double header at the Ato Boldon Stadium, Couva, during yesterday’s opening of the Women’s U-20 CONCACAF championships, hosts Trinidad and Tobago were humiliated by Haiti in-front of the home crowd. Nerilia Mondesir’s hat-trick inspired a comeback for the visiting team who found themselves 2-0 down in the first 12 minutes.

Trinidad and Tobago took the lead in the 4th minute after, Dennecia Prince, sent the crowd into a frenzy when she made room for herself by getting past her defender and curling the ball into the bottom left corner to open scoring. In the 11th minute, the home team doubled the lead thanks to Kedie Johnson finding the back of the net from a corner kick. Attempting to swing the ball to the far post, Johnson saw her effort curling into the top corner where the Haitian goalkeeper, Kerly Theus, had no chance of stopping the ball.

Haiti then pulled a goal back in the 26th minute when, captain Nerilia Mondesir, got on the end of a cross and headed the ball into the net. Her team-mate, midfielder Sherly Jeudy, could have equalised in the 34th minute after she rounded the local custodian, Klil Keshwar, but miss-kicked the shot and gave the defender time to clear the ball off the goal-line. Haiti then had another opportunity to equalise, however, the referees called offside to deny the visitors.

The persistent Haitians got their reward on the stroke of half time when Mondesir found the equaliser via a low shot. After the half-time interval, Mondesir completed her hat-trick in the 54th minute, and turned the score around by gliding past the Trinibagonian defence and slotting the ball into the goal. Chances were in the minimum after Mondesir’s third as the scores remained 3-2 in favour of until the final whistle. The Player-of-the-Match award went to the Haitian captain, Mondesir, for her performance on the field.

After yesterday’s match, T&T will play Canada tomorrow at 6.30 pm, before playing their final group match against Costa Rica on Monday at 6.30 pm. The entire tournament will be held at the Ato Boldon Stadium.