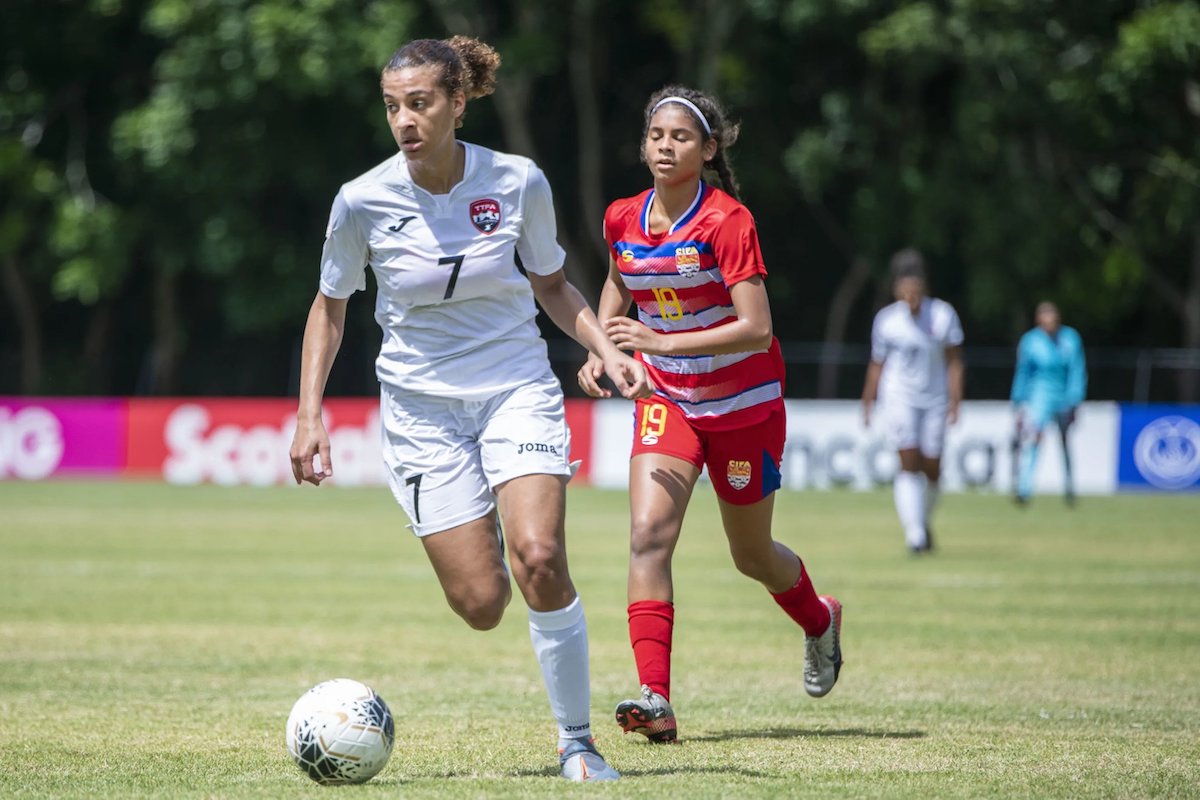 on Mon­day Hood, the Po­lice FC coach ad­mit­ted that his team is vul­ner­a­ble in de­fence and changes will be made. But he was re­luc­tant to say what the changes will be, for fear of not giv­ing any­thing away to his op­po­nents.

Hood was yes­ter­day high in prais­es for his girls, say­ing they have achieved the ob­jec­tive set out for them by the T&T Foot­ball As­so­ci­a­tion, which was to qual­i­fy for the quar­ter­fi­nal phase. How­ev­er, he now wants the girls to take it a bit fur­ther by mov­ing on to the semi­fi­nal stage.

"We are con­fi­dent that we can make it to the semis. I know it's go­ing to be a mon­u­men­tal task against the Mex­i­cans be­cause the girls worked re­al­ly hard against the Puer­to Ri­cans and now they will have to pro­duce a sim­i­lar per­for­mance to get past the Mex­i­cans. It will be a test of their phys­i­cal and men­tal tough­ness if we are to progress," Hood ex­plained.

The Mex­i­cans have scored 21 goals in their four match­es to date; con­sist­ing of a 12-1 win against Grena­da: 3-0 against Guyana: 4-0 against Nicaragua and 2-1 against the Puer­to Ri­cans. And now they will fan­cy their chances against T&T, whom they have had more favourable re­sults against in the past.

The So­ca Princess­es whipped St Kitts/Nevis 6-0 in their open­ing match and shut-out the Cay­man Is­lands 2-0 in the sec­ond, be­fore be­ing crushed 0-7 by emerg­ing re­gion­al gi­ants Haiti last week. Hood, how­ev­er, said from their match­es he re­alis­es they have to work on their de­fence.

"I can­not say if the de­fence will be strength­ened in num­bers, but I know there will be changes in the de­fence. We will al­so have to work on mak­ing the tran­si­tion from de­fence in­to at­tack."

From the So­ca Princess­es' two group wins, they fin­ished sec­ond in the Group F be­hind the Haitians, who had an un­blem­ished record go­ing in­to the knock-out phase.

In the oth­er match, Haiti will take on Guyana from 4 pm, while the T&T/Mex­i­co en­counter will be the last game on the day.

Reaping the fruits we have planted.
By Joel Bailey (Newsday).

SUSAN JOSEPH- Warrick, president of the T&T Women’s League Football (WoLF), is pleased with the performances of the national team, who advanced to the CONCACAF Under-20 Women’s Championships quarterfinals.

On Sunday, at the Estadio Panamericano, San Cristobal, Dominican Republic, T&T defeated Puerto Rico 5-4, via kicks from the penalty spot, in their second-round contest, after the scores were locked at 3-3 at the end of 120 minutes of regulation and extra times.

The T&T team, coached by Richard Hood, will turn their attention towards Wednesday’s fixture against Mexico.

Hood, who began his reign as team coach in January, spent most of his time assessing players, and scouting at the North American-based ones, before finalising his team for this tournament in mid-February.

Joseph-Warrick, who is also a TT Football Association (TTFA) vice-president, commented on Monday, “I am very happy and pleased because we are moving forward, just exactly what we (TTFA) wanted to have happened.

“We went out of our way, made sure the girls had a camp where they could have synchronised with each other…. the international and the local girls,” she continued. “The coaches were able to see them, (also) blend the team, mix the girls and get things going. We are now reaping the fruits of what we have planted. I must say hats off to the technical team.”

With regards to the Puerto Rico encounter, Joseph-Warrick said, “(Sunday’s) game was totally intense, it was nice to see the girls hold their own. It shows that the girls have the grit to go forward. I’ve expressed my gratitude to them and we’re getting ready to face Mexico on Wednesday.”

The national women’s programme has been going through problems over the past five years.

Will this team now serve as an inspiration for the revival of women’s football in T&T?

“Yes,” Joseph-Warrick replied. “I will add that this is the planning-ahead that the current TTFA is now striving, because we have the (Under) 17s and (Under) 15s who are currently in training. All will be given the opportunity to produce the best teams moving forward.”

In an article on the TTFA website, Hood said, “Of course I’m happy with the result. We have crossed the hurdle to get into the quarter-finals which was our main objective coming into the tournament.

“We achieved the main objective, the objective of the technical committee which was getting to the quarter-finals. My main objective was to get into the semi finals and we are still on course for that.

“The girls work hard and I’m happy about that,” Hood continued. “I am proud of the resilience shown. But we really could have worked smarter and I would have liked to see us stick to what we were supposed to do throughout. But I’m happy with the result.

“We have achieved the goal of getting to the quarter-finals. Now we look towards preparing well for that quarter-final and look to see what we can do against who would be the favourites, the Mexicans. They are a quality team and of course we have our work cut out.

Team manager Maylee Attin-Johnson, the former T&T women’s captain, was impressed by the character shown by the squad.

“As poorly as we played, what I was most proud of about the young ladies was their resilience and determination to never give up and to fight through a gruelling 90-plus minutes to come out of and still have the lead and confidence to score all five kicks.”

She continued, “For us and what I know about tournament football is not about how good you look or how good you perform, but it’s just about getting the job done and we were able to do that today and now we look forward to the game on Wednesday.”