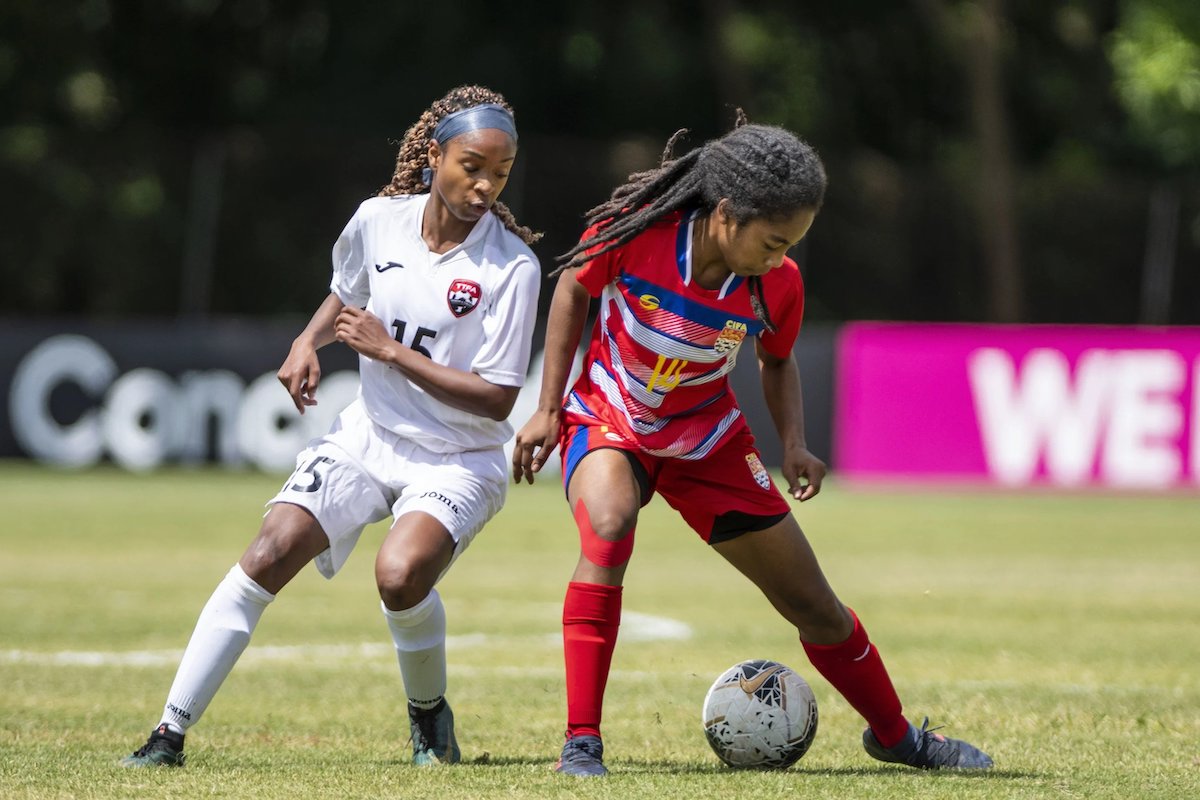 Arnelle Douglas was struggling when she got the opportunity to play soccer for Trinidad and Tobago. The fears that often weigh heavy on the shoulders of a student athlete weighed on her, she found herself wondering if she was good enough.

The second year humanities major with aspirations of pursuing a master’s degree in Drama Therapy is representing Trinidad and Tobago at the CONCACAF Under-20 Women’s Soccer Championship.

Douglas plays for the Brock women’s team that went 7-3-4 this past season, Douglas herself scored a game winner in September against Windsor. It was after one of her games that she was approached about the tournament.

“[He] asked what my background was and said I should try contacting the national U20 team,” said Douglas.

Douglas, who is not one to shy away from an opportunity, sent out an e-mail that night. She found herself heading to Trinidad to participate in trial sessions less than a month later. She learned just a week later after returning home to Toronto that she’d been selected for the U-20 team.

“For me this opportunity was a reminder that I am not forgotten and there’s a plan for my life to be successful. Right away I knew this was something I couldn’t shy away from, I knew I wanted to do it,” said Douglas.

Family is an important factor for the midfielder. Though she is the first Canadian born in her family, her Trinidadian heritage will always hold a special place in her heart.

“That’s where all my family is,” she said.

Not only is Douglas representing Trinidad, she’s representing her family, the values and work ethic they have instilled in her. Her parents immigrated to Canada as a way to give their children more opportunities and Douglas has grasped hold of many.

Coming from an athletic family, some of her earliest memories are on the soccer field, cheering on her older brother as he played with the Pickering Soccer club. She did everything she could to be involved, wearing his jerseys and socks to his game, cheering from the stands and somehow finding herself standing amongst her brother and his teammates when halftime snacks were being handed out. Douglas wasn’t old enough for kindergarten, but she knew she wanted to be a soccer player.

“I started playing soccer when I was finally of age to enroll, I was 4 years old,” she said.

After that, her career progressed rapidly.

“I was playing and training at a semi-professional level with League 1 Ontario as well as Rep for my local town, Darlington Soccer club,” she said.

She still wanted more, though. She sought out personal training sessions in the summers and gained the skills that have brought her so much success with the Badgers. Douglas is fast and she has an eye for the game that comes with experience and dedication.

“The entire [Brock] staff has pushed me to better myself,” she said. “Without them, I would not be at the level I am at today.”

Douglas is currently in the Dominican Republic, playing for a team with aspirations of qualifying for the FIFA Women's U-20 World Cup for the first time in tournament history.

“My team has been doing quite well in the tournament so far, no complaints there,” she said.

Douglas has played on an international level before, representing Canada in the Gothia cup when she was just 13. At 20, she is now fully able to realize the responsibility that comes with playing for a national team.

“I can appreciate and understand the world of football and carry myself with more confidence, maturity, pride and dignity at the international level,” she said.

Douglas feels a sense of patriotism and pride being surrounded by a group of women with similar goals.

“Being on the team with such skillful young women is refreshing and inspiring especially when we have lots in common with each other. It feels more like a tight-knit family rather than friends,” said Douglas.

Soccer to her is more than just a sport. Positivity, unity and love are all things she says she’s seen sport bring to her family members and teammates, all things she holds in high regard.

It wasn’t always easy. The transition into university athletics was a difficult one. She had to learn how to balance all the responsibilities she’s taken on in her first year at Brock. In her second year, she’s managed to get into the swing of things.

Not only is Douglas an athlete who trains every day, she also makes time to dance twice a week while being in school and filming videos to post to her growing YouTube channel.

She tackles her projects one day at a time.

“When Friday comes I am relaxed and focused on my soccer games or have the time on the weekends to work and film for my YouTube channel,” said Douglas.

With so much of her life being planned around soccer, it’s important for Douglas to have a creative outlet where she can have fun and express herself.

“At first, it is hard and awkward but once you get the hang of it many ideas flow and creating starts becoming more enjoyable rather than a stressful and unsure time,” she said

Douglas uploads videos to the channel called “JustArnelle” whenever she has an idea. Sometimes she’s sitting in front of the camera, smiling and telling a story and sometimes her friends join her for a makeup challenge or a fast food taste test.

Similar to sports, it can become easy to lose yourself in the numbers. Douglas has uploaded videos that have received thousands of views and some that have received only a couple hundred. In the same way that her soccer team might go on a losing streak, her YouTube channel might lose views.

“A person’s viewings can be successful and high in numbers then dry and low. As a YouTuber, I constantly have to figure out what my viewers like while still trying to be authentic,” she said.

Not only is it something fun and creative, but it’s also an avenue she could see herself using to find opportunities as she learns and grows.

Douglas makes plans and sets goals for herself, but she does believe in a higher power that guides her. Her Christian faith was something that helped her in making the decision to play for Trinidad and Tobago. The opportunity wouldn’t have presented itself if it didn’t have a purpose, she believes.

She has a home in soccer, but as any athlete can attest, it’s precarious. An injury can derail a career in just a few moments. Because of that, Douglas is invested in becoming a well-rounded person with a plan outside of athletics. It starts at Brock with her undergraduate but she’s though far beyond that too.

“After my undergraduate degree, I have plans to pursue a master degree in Drama Therapy, only a few universities in the world are qualified under the [North American Drama Therapists Association] and I plan to apply and get into them.”

Drama Therapy is an experiential and therapeutic practice that aims to help participants tell stories, achieve goals and solve problems through Drama, among other things.

That doesn’t mean Arnelle Douglas is going to be done with soccer any time soon. She has a spot on the Badgers soccer team when she returns to the country in early March and she hopes to be able to stay with Trinidad and Tobago in future competitions.

“As for now, I do see myself playing soccer for a long time, it’s something I love and enjoy and I hope I can continue having it as a part of my life for as long as I can.”