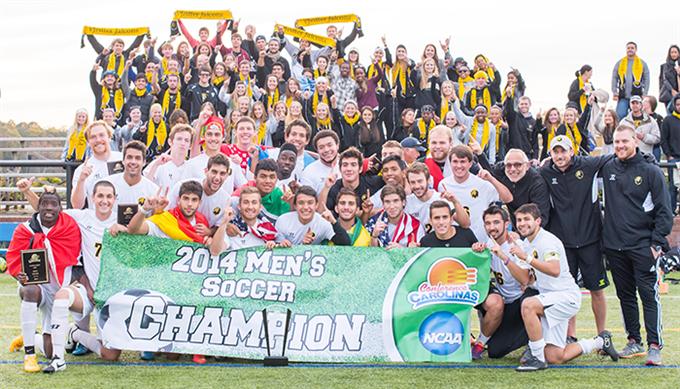 Mateo Garces-Yepes converted on Pfeiffer’s fourth and final penalty kick as the Falcons (16-4-1) secured a 4-2 shootout victory over Lees-McRae (13-5-2) to capture the 2014 Conference Carolinas Tournament Championship on Saturday afternoon. Nicolas Dulac made two huge saves in penalty kicks and Pfeiffer went 4-for-4 in PK’s to clinch the title.

Pfeiffer’s first trip to the Conference Championship match since the 2000 season was certainly memorable. Despite being at a neutral field on the campus of Limestone, Pfeiffer had a great home field advantage thanks to tremendous support from the Pfeiffer community. The match featured plenty of twists and turns before the Falcons stormed the field to celebrate the championship.

Neither team was able to convert in regulation and two 10 minute overtime periods went by with the game locked in a scoreless draw. Dulac calmly stopped the first two Bobcat penalty kicks and Pfeiffer seized the momentum and never looked back. Jorge Buzzo, Nathan Regis and Niko Andrade all converted on their opportunities, paving the way for Garces-Yepes’ game-winner.

Pfeiffer’s Regis nearly won the match late in the second half as the sophomore appeared to have scored his 20th goal of the season. However, despite putting the ball in the back of the net, Regis was whistled for being offsides, which wiped off the goal. The Bobcats narrowly missed a chance to win it in regulation as well when Dulac found himself out of position and left Lees-McRae with an open net. However, the Bobcats shot sailed wide and kept the game tied.

Lees-McRae had the upperhand in the first overtime period, holding the Falcons without a shot in the 10 minute stanza. Each team took three shots in the second overtime period but were unable to convert.

James Smith attempted the first penalty kick but was denied by a diving Dulac, putting the Bobcats in an early hole. Buzzo calmly sank his attempt, putting Pfeiffer up one. Dulac guessed right on Lees-McRae’s second attempt off the foot of Jordan Wright, giving the Falcons a commanding advantage. Senior Niko Andrade buried the second chance. Nathan Watt recorded the first score for Lees-McRae, but Regis answered to keep Pfeiffer up two. Maruice Kleinert pulled the Bobcats to within one at 3-2 with his successful kick. Bobcats’ keeper Nicholas Stover needed a save to keep the Bobcats slim hope alive but Garces-Yepes beat him on the right side as the Falcons stormed the field.

Regis was named the Tournament’s Most Valuable Player and Martim Galvao, Dulac, Buzzo and Luke Janes were selected to the All-Tournament team.

After inheriting a program that won one match prior to his arrival, Head Coach Bob Reasso has the Falcons knocking on the door of an NCAA Tournament berth. In his two seasons, Reasso has guided his alma mater to a 26-12-3 record and shattered the previous school record of 13 wins in a season.

Pfeiffer entered the tournament as the number two seed and defeated No. 7 Mount Olive 2-0 in the Quarterfinals. Pfeiffer met No. 3 Barton in the semifinals and scored four times in a 9:58 span as they blew out the Bulldogs 6-0.

Lees-McRae was the No. 4 seed and advanced to the Championship by upsetting top seeded Limestone 1-0 in overtime on Thursday night.

The Falcons will find out their postseason fate on Monday night at 7:30 p.m. as the Division II NCAA Tournament bracket is unveiled. The broadcast will be streamed on NCAA.com.