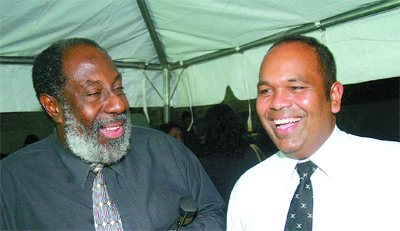 The Trinidad and Tobago Football Federation (TTFF) has decided to sue its former special advisor and Minister of Works and Infrastructure Jack Warner over missing 2006 World Cup revenue and agreed to send a pre-action protocol letter to Warner today.

Deryck Ali, attorney for the TTFF, informed Justice Devindra Rampersad of his client's intention at the Port of Spain High Court this morning.

The TTFF, along with its former President Oliver Camps, was sued by its former World Cup players over unpaid bonuses in 2007. The football body supposedly banked over $180 million arising from the 2006 World Cup, according to a Freedom of Information request by the players in 2007, but has claimed that Warner had complete authority over its funds.

"The TTFF realises the final responsibility for any account in its name lies with us but confesses that it surrendered its authority to Mr Warner," stated the TTFF, in a release on Thursday morning, "(and) we never questioned his authority or actions and are now in a position of despair as we are starved of funds by FIFA until full disclosure, which we are unable to provide without Mr. Warner's input.

The 13 "Soca Warriors" who filed suit are:

On Sunday, FIFA revealed that it has withheld its annual subvention of $1.6 million (US$250,000) to TTFF due to its inability to locate money sent to the body, two years ago, to be further disbursed by Warner to Haiti.

The High Court is also unable to determine the bonus figure owed to the 2006 World Cup squad because of a shortage of documentation and, on 8 February 2012, the "Soca Warriors" seized all removable assets from the TTFF headquarters as a result of its failure to satisfy a debt to the players.

Groden was in danger of being found in contempt of court too for his failure to ensure that a court order to his former employee, Warner, was carried out on 10 February 2012.

Still, Ali did not seem to be in a hurry to begin legal proceedings against Warner.

The attorney said he would get started first thing in April as he had a busy March ahead due to obligations with the West Indies Cricket Board (WICB). Justice Rampersad ordered Ali to dispatch a pre-action protocol letter to Warner today.

Ali suggested that a pre-action protocol letter was unnecessary. The Judge insisted.

Eventually, the TTFF agreed to send Warner the legal letter and present a copy of this action to Justice Rampersad. Ali was given until 3 April 2012 to formally begin proceedings while the World Cup bonus dispute will resume before the High Court on 4 April 2012.

Justice Rampersad will also rule, on 4 April, on the figure owed to the players for legal costs arising from their unsuccessful attempt to join Warner to the case on 12 January 2012.

The Judge had the option of joining Warner today but suggested that there may be complications if another party was added this late in the proceedings. Instead, Justice Rampersad promised to expedite the TTFF's suit, which would run parallel to the players' case.

The players' attorney, De Peiza, agreed that it is better, in theory, for the TTFF to take action against Warner.

"At the end of the day, the ball is no longer in our court as regards to getting the missing accounts," De Peiza told Wired868.com. "The proper party has filed suit."

However, legal representatives for the players will be keeping a close eye on the TTFF's efforts.

Ali insisted that the Warner suit would be handled as diligently as possible, so as to avoid any suggestion of collusion, and said the TTFF was keen to employ two unnamed senior counsels to assist.

Ali, prompted by a question from Justice Rampersad, suggested that he would write all entities that contributed towards the 2006 World Cup for information, which will be used in the TTFF's action against Warner.

A TTFF insider said the body had also been encouraged by FIFA to hold Warner accountable for missing funds and hopes that its decision today helps to repair relations with the governing football body and its former players.

The World Cup players will be allowed back on to the TTFF's premises today and next Wednesday and Thursday to take copies of documents that may be relevant to the ongoing case.