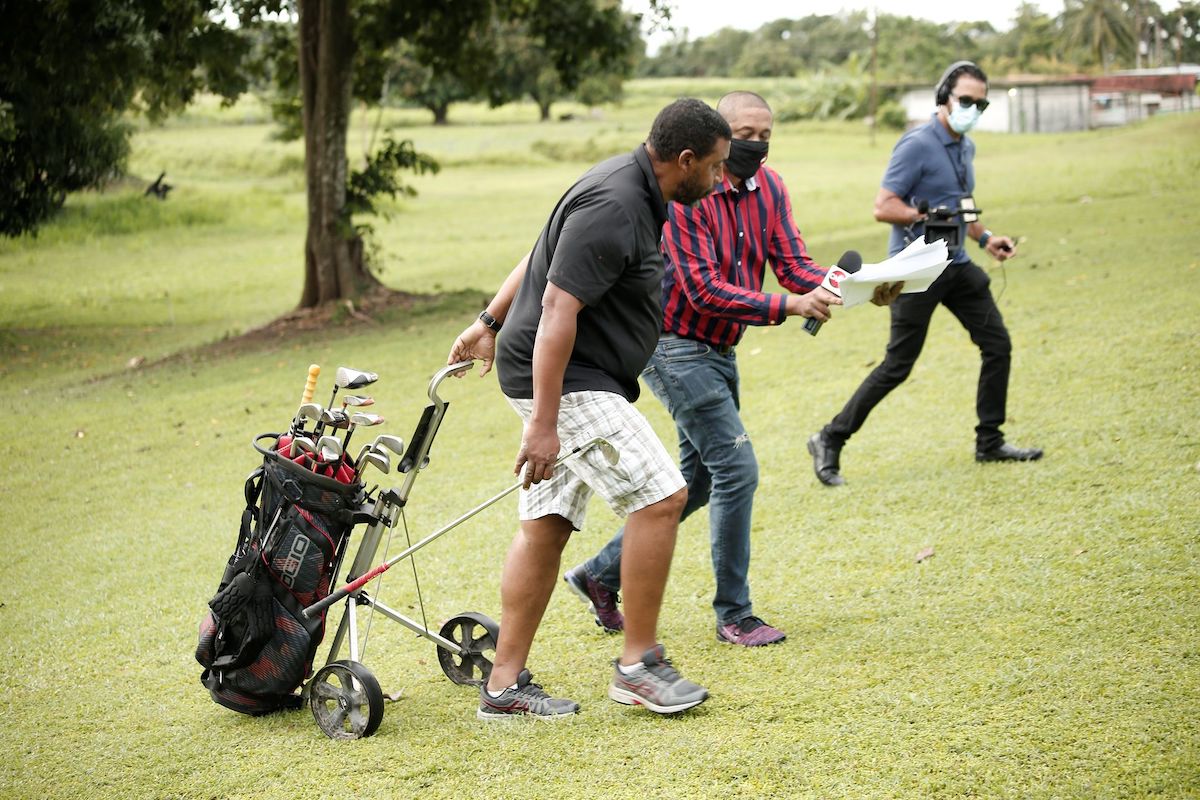 With the help of forensic investigators, Guardian Media unravelled a financial trail leading to a Panamanian bank account which seems to have been opened by former T&T Football Association president David John-Williams in April 2017.

The email address allowed the investigators to pin down communication with any bank in their database, including any bank in Panama or elsewhere in the world.

Their search flagged an account with a Panamanian bank called BPR Bank, SA.

Located in the financial district of Panama City, the bank only started operating in Panama in 2016.

Doing a deep dive with personal information about John-Williams provided by Guardian Media, the investigators reported that, “We have reason to believe that Mr David John-Williams is in possession, and or associated, with a bank account at this bank which has in excess of US$1.5 million.”

On April 1, 2017, the bank account was created and on the same day US$279,742.62 was deposited into it via a payment order, according to the information the investigators obtained.

This is bearing in mind that at some point in early 2017, FIFA gave the TTFA US$2 million in funding for the Home of Football project in Couva. At the same time, the association’s finances were in serious decline. 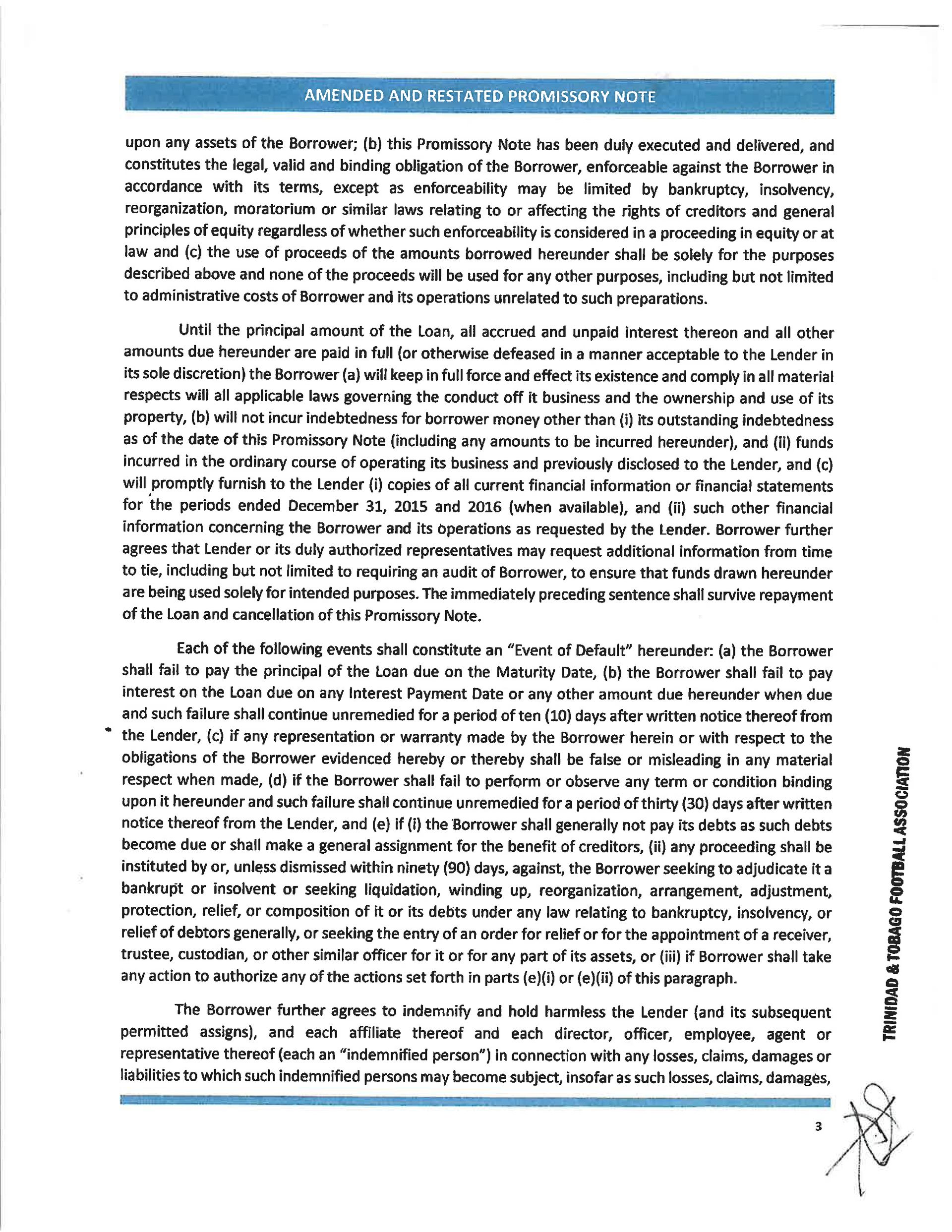 According to forensic investigators, the deposits in the BPR bank account came from those two companies.

According to Panama’s public registry, SOREG INC was formed in 1975 and COLSOL Investment Corporation in 1977.

Forensic investigators and another reliable source verifying the information said both companies are defunct - SOREG dissolved and COLSOL Investment Corporation was suspended.

Someone named David Apollnaris John-Williams, the same name as the TTFA’s former president, is listed as a director and secretary in these companies, according to forensic investigators.

Why? Because they said it likely made it easier for John-Williams to open an account with BPR Bank SA, since his name was listed on the Panamanian companies.

What the forensic experts concluded in their report to Guardian Media was that if COLSOL Investment and SOREG were used for the transactions to the BPR account “a predication of an off-the-shelf offshore scheme may exist.” 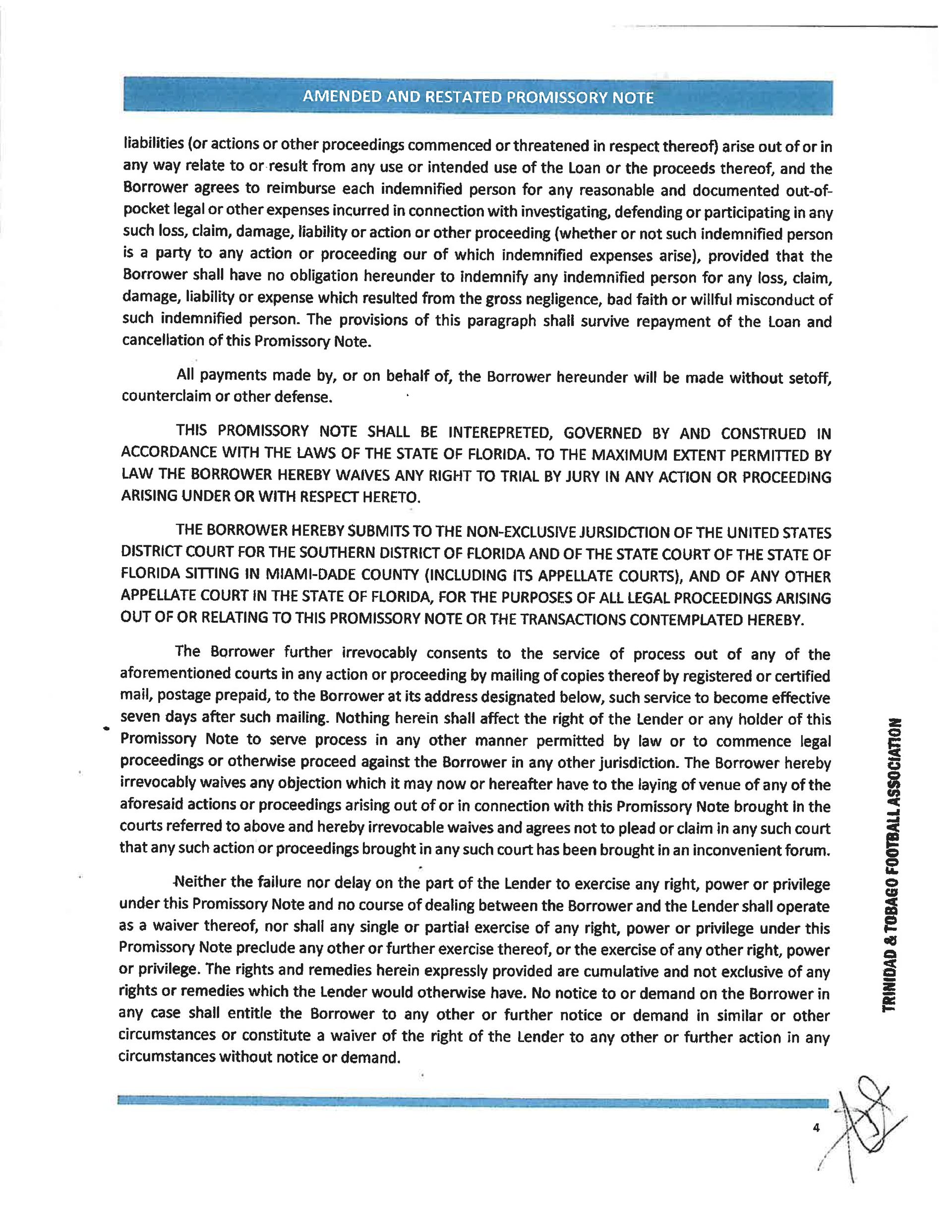 Usually registered through a company formation agent before being transferred to the customer, an off-the-shelf company, or ready-made company, is a pre-registered limited company that was never traded.

What this means, according to investigators is that COLSOL and SOREG were likely used as a conduit to facilitate the transfer of the money into the BPR bank account in Panama, allegedly owned by John-Williams.

“Forensic investigators established you opened the account in early April 2017 and then made a deposit through a payment order to the account for US$279,000, and then on August 18th, another payment order deposited US$249,000,” Guardian Media asked to John-Williams near his home at the Sevilla Golf Course, in Brechin Castle, Couva on Tuesday (September 8).

“To my bank account? ... It’s laughable. I hope you can produce the evidence,” John-Williams said in response.

“During the investigations they discovered the money came from two companies - SOREG Incorporation and COLSOL Investment, where they said you were listed as a director and secretary, and it seems the money came from an account with these business names that were defunct. They alleged you inserted your name into these companies and later transferred the funds to the bank account you set up. Whose money is that?” Guardian Media then asked.

Finally, we asked John-Williams, “Why did you decide to open an account in 2017 in Panama?”

Once again, he laughed.

But FIFA’s Veron Mosengo-Omba failed to inform Wallace that former president David John-Williams had already received the funding in January 2019, well ahead of time. 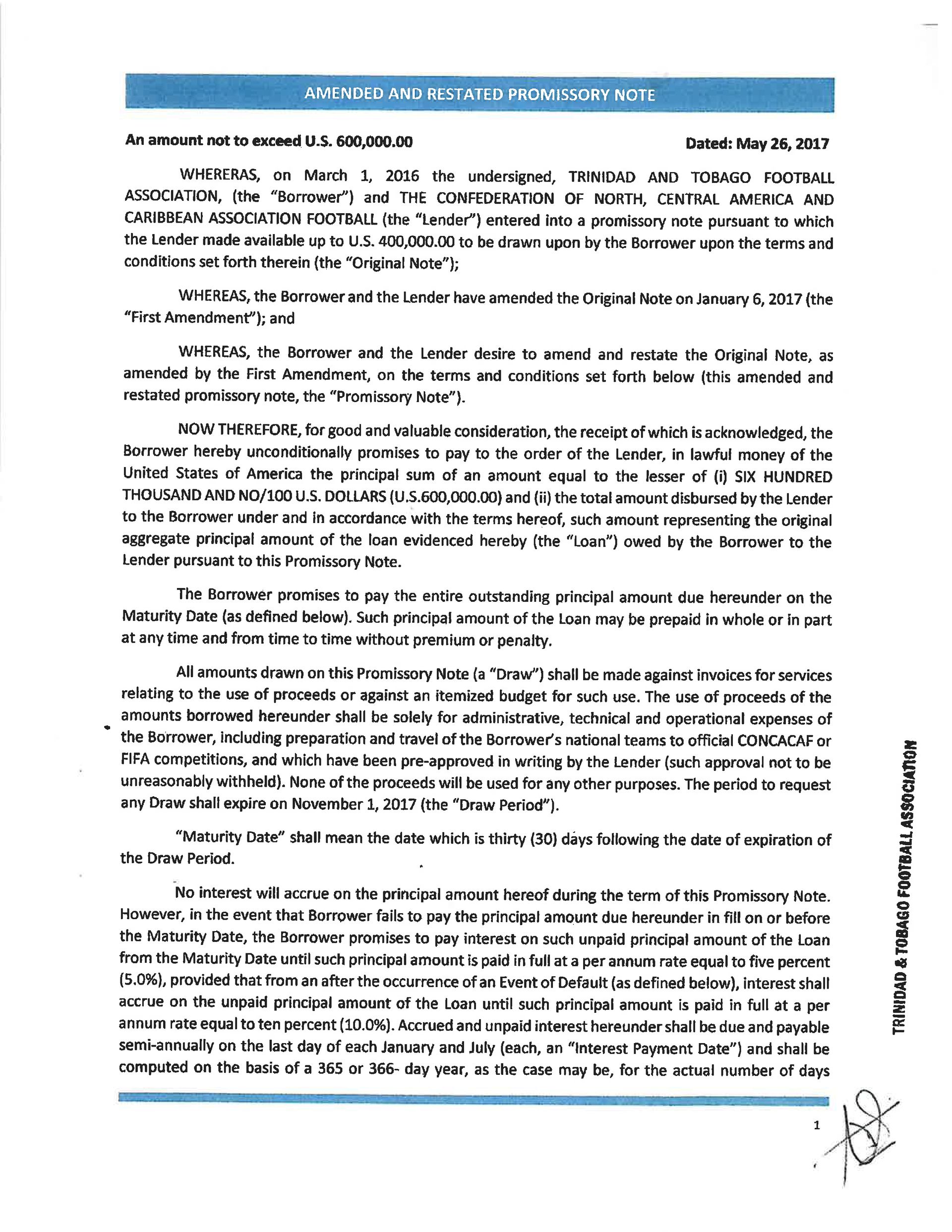 That money remains unaccounted for.

Also unaccounted for is a CONCACAF loan that John-Williams was granted in May 2017.

Like the second tranche of funding, no one knew that John-Williams received the CONCACAF loan. The loan, unknown to the then TTFA board, came a month after the Panama bank account was opened.

It also came only a few months after FIFA gave the TTFA US$2 million of Forward Funding money and approximately US$1.2m in annual operational costs - US$700,000 in January and US$500,000 by July of that year.

The CONCACAF promissory note, obtained by Guardian Media, showed the signatures of CONCACAF General Secretary Phillipe Moggio and John-Williams as the loan’s borrower.

The loan’s agreement stated: “The use of proceeds of the amounts borrowed hereunder shall be solely for administrative, technical and operational expenses of the borrower (TTFA), including preparation and travel of the borrower’s national teams to official CONCACAF or FIFA competitions and which have been pre-approved in writing by the lender. None of the proceeds will be used for any other purposes.”

As part of the agreement, TTFA had a maturity date of 30 days to repay the amount, or as stipulated, after this date, interest was to be accrued annually.

Three years later, this loan has not been repaid, with the interest sending the association into deeper debt.

In December 2019, just a few months before a FIFA Normalisation Committee replaced the TTFA administration under Wallace, CONCACAF’s Chief Financial and Administration Officer Alejandro Lesende wrote to Yale Antoine (TTFA administrative officer) indicating the outstanding debt from 2017, with interest, stood at US$662,988.04.

Given the TTFA’s already precarious finances, Lesende was reluctant in lending the money, according to CONCACAF insiders. However, he decided to grant the loan on the condition that it was to pay off people owed money by the association. 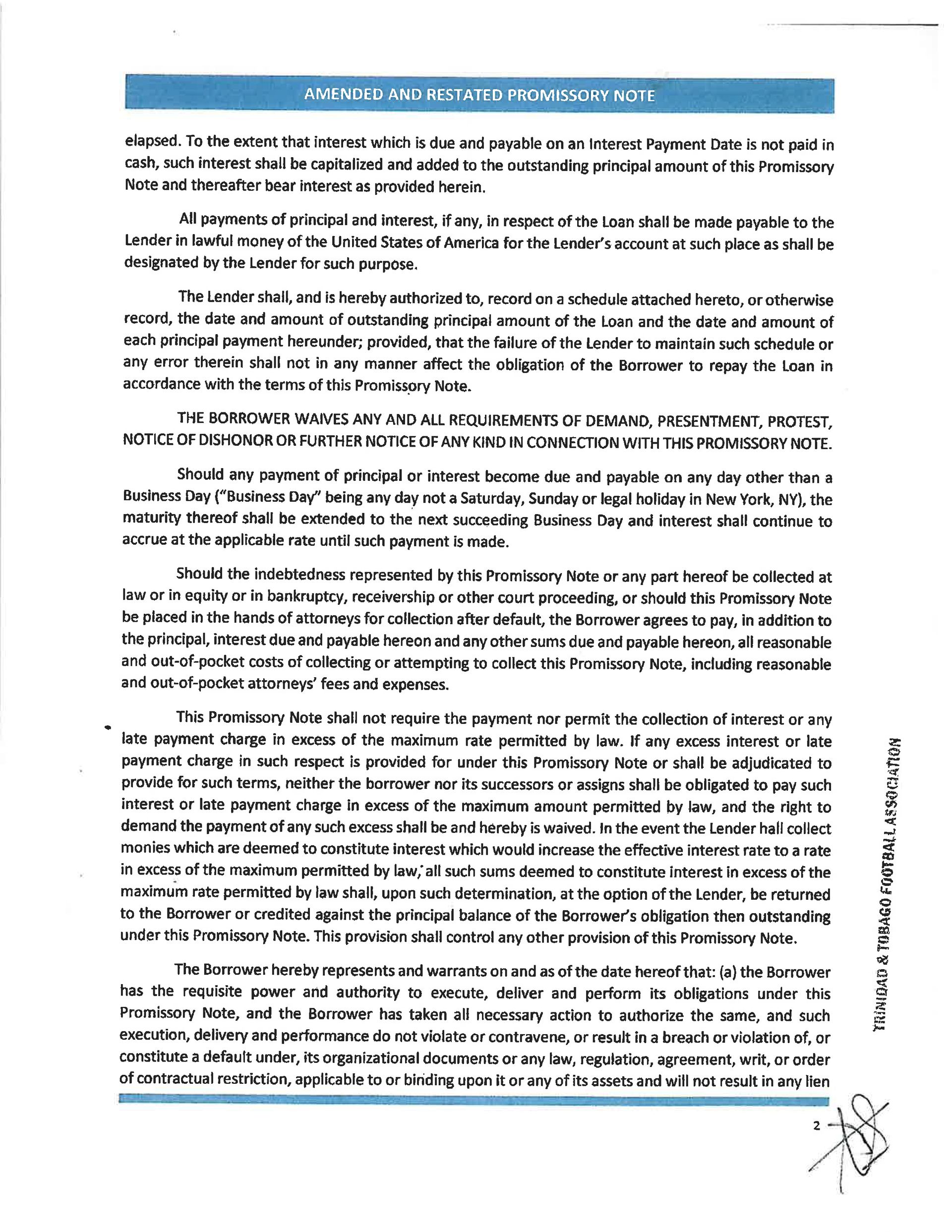 Guardian Media obtained a breakdown of the parties who received partial payments:

Out of the money originally assigned to Lawrence, however, some was paid to technical staff and a few national players for a portion of their match fees.

According to TTFA and CONCACAF insiders, most of the loan intended for operational use was diverted to the Home of Football project instead, leaving creditors in a quandary.

Asked why he decided to take out the CONCACAF loan, John-Williams declined to comment.

“Did you short change Trinidad and Tobago football and the people of this nation, Mr Williams?” Guardian Media then asked.

When the last TTFA board came into office in late November 2019, they attempted to dig into the financial dealings that occurred during John-Williams’ tenure.

Dismissively, Mosengo-Omba responded saying, “We are aware of the financial situation and existing debts of the TTFA. However, in order to have a holistic view of the financial situation of the TTFA, we will send a joint mission of FIFA-CONCACAF which will be comprised of financial experts to work with the FA, so that we can have clarity, and to work with you for the next move. In the meantime, we can only release funding directly related to competition/tournament preparation, as we have been doing so far.”

But when Guardian Media previously spoke to John-Williams for another story in May this year, he sent us a letter from FIFA signed by Mosengo-Omba outlining that FIFA was pleased to announce their entitlements under the FIFA Forward Programme for $2m for the years 2019-2022 - a second tranche that was given in an election year when a new TTFA president (Wallace) was later chosen. 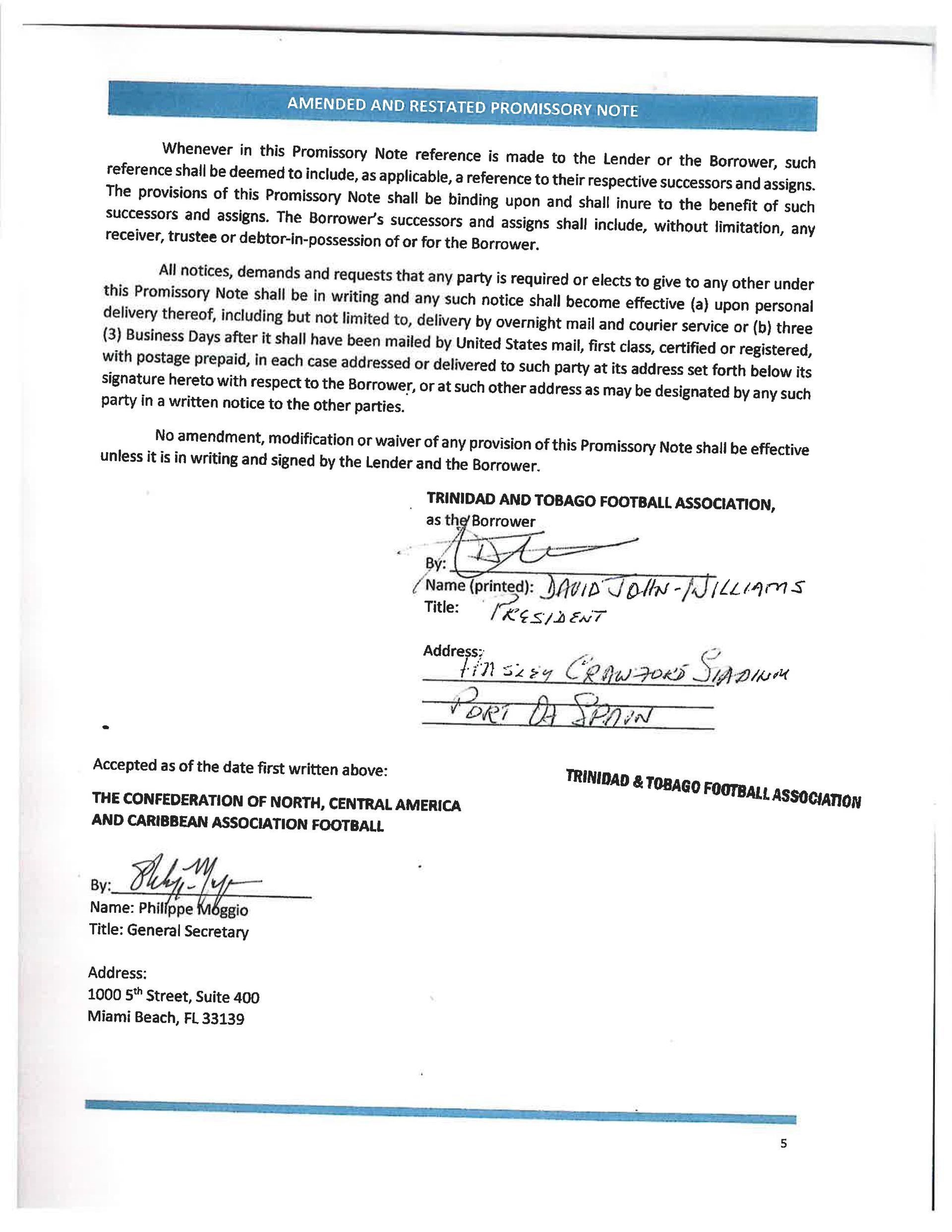 In other words, John-Williams received two tranches of FIFA Forward Programme money in 2017 and 2019. Usually, monies are given under this programme every four years. The question remained why Mosengo-Omba failed to tell Wallace, in his letter in February this year, that the FIFA Forward Programme for the next four years had already been disbursed in January 2019?

One month later, in March, a FIFA Normalisation Committee under Robert Hadad took control from the Wallace-led TTFA board.

There remain a few questions about the dealings between the John-Williams board and members of the FIFA executive.

Last October, in an interview with UK journalist Paul Nicholson, then TTFA member Selby Browne hinted that should John-Williams lose the TTFA election, FIFA would remove the new board and install a Normalisation Committee.

Was the FIFA Normalisation Committee a way to cover up transgressions committed during the reign of John-Williams?

With FIFA’s Congress due on September 18 and the TTFA facing possible sanctions for taking the current dispute over the Normalisation Committee to court, will FIFA probe allegations of corruption, or rather will T&T football face its darkest moment without the full truth coming to light?

With reporting by Joshua Seemungal