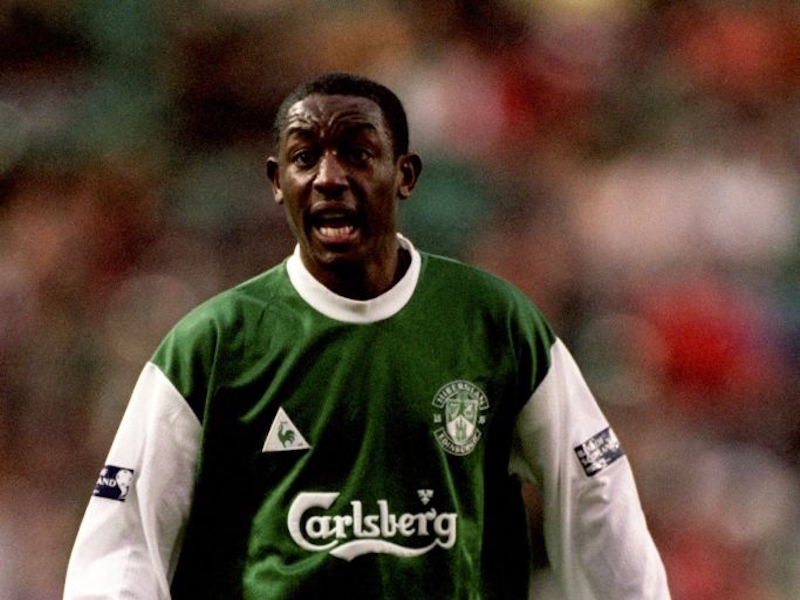 One of the most skilful player ever to grace the Scottish game, Russell spent under three years at Easter Road, but left some lasting memories amongst the supporters fortunate enough to have seen him play.

Born in Port of Spain in Trinidad, Russell’s skills earned him the nickname ‘The Little Magician’ and he would go on to win over 100 caps for the Soca Warriors earning legendary status amongst his countrymen.

His sublime first touch coupled with exceptional ball control and the skill to beat a defender on both sides along with an eye for a goal and the ability to see two moves ahead quickly caught the attention of top European sides and he spent six years in Portugal, winning back to back SuperLiga titles with Porto under Bobby Robson.

As a result, he became the first Trinidadian to feature in the UEFA Champions’ League and was also a member of the Boavista squad that won the Portuguese Cup before Alex McLeish brought him to Easter Road following a recommendation from Tony Rougier.

Incredibly, ‘Big Eck’ insisted that Russell take part in a trial match against Brechin City, but realised after only a few minutes that he had found a genius.

Russell quickly won the hearts of the Hibernian fans, winning the Scottish Division One ‘Player of the Year’ award in his first season, during which he helped the club to promotion.

He scored twice and missed a penalty against Hamilton at Firhill in the game that guaranteed a return to the top flight and remarkably, in the 25 games he started that season, Hibernian won 21 and only lost once.

Back in the Premier League, Hibernian finished a credible 6th reaching the Scottish Cup semi-final where they were unlucky to lose to Aberdeen then the following year Russell helped the club to a 3rd place finish and a Scottish Cup final.

His form that season saw him awarded joint 33rd position in the FIFA poll for World Player of the Year following nominations from national coaches putting him on a par with Roy Keane and Dennis Berkamp.

Russell seemed to reserve his best performances for the Edinburgh derbies where he was never on a losing side, scoring three times at Easter Road including a goal which many Hibernian fans believe was the best ever seen at the stadium.

His reasons for leaving have been well documented but whenever he returned to Easter Road, he received a warm welcome from the fans and in 2011 he played in Ian Murray’s testimonial match where he received a deserved standing ovation from the supporters after yet another superb performance.

Russell recently recalled: “I have many fond memories playing for Hibs. I love the city of Edinburgh and we had a wonderful team.

“Derby games are always special in Edinburgh and one of my favourite memories was the 0-3 game at Tynecastle. We totally dominated that game and there could have been a few more goals. In my view it was one of the best performances we had in my time at Hibs along with the 6-2 game at Easter Road.

“I had an amazing relationship with the Hibs’ fans. I think they appreciated the stage I was at in my career and what I brought to the team. The fans always supported me which I appreciated.

“It’s difficult to say if this was the best football of my career but it was certainly a period where I enjoyed my football.”

After leaving Hibernian, Russell won a League Cup winners medal with Rangers and had a brief spell with Dundee United before reuniting with former team mate John ‘Yogi’ Hughes at Falkirk.

As he did with Hibernian, Russell helped the Bairns to promotion whilst winning his second ‘Player of the Year’ award then helped the club consolidate in the top flight.

Initially Russell only intended to spend one year at Falkirk however that turned into five and during his tenure he represented Trinidad and Tobago in the 2006 World Cup.

In 2008 he was inducted into Falkirk’s Hall of Fame and the club hosted Russell Latapy day in his honour with a game against Hibernian.

He continued: “Yogi (John Hughes) was definitely an influence in my decision to continue to play football. At that period I was thinking of retiring and he persuaded me to play one more season which turned into five seasons.

“I have a lot of fond memories of my time with Falkirk including winning promotion to the Premier League.

“I also enjoyed the beginning of my coaching career and bringing through youngsters which was extremely rewarding.”

Since hanging up his boots, Russell has enjoyed success as a coach and assistant manager under John Hughes at Inverness and was at the club when they won the 2015 Scottish Cup, ironically against Falkirk.

Speaking of Scottish Cup wins, Russell was delighted to watch events unfold at Hampden on 21st May 2016. He continued: “I watched the Scottish Cup final because it was between two of my former teams. It’s been a hundred odd years since Hibs last won the Cup and I thought it was a long time in coming but it’s great for the history of the club and also for the fans.”

Russell is currently based in Portugal however he is keen to return to the game as a manager and who knows what the future holds for the Little Magician.

Last word goes to Valentino Singh, sports editor of the Trinidad Guardian who said: “There are four sporting heroes that we must mention in our paper every day, Dwight Yorke, Brian Lara, sprinter Ato Bolden and Russell Latapy. Of the two footballers, Yorke may be the best paid and most high profile but to me Latapy is still the best player.”

Mr Singh will find no arguments amongst the Hibernian or Falkirk fans.