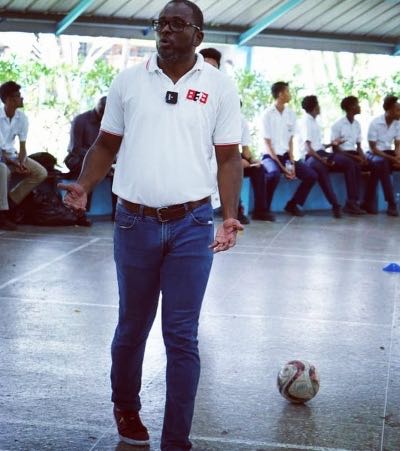 “[…] Educators refer to ‘recency and frequency’ as part of the learning process, and when you look at our players, they all possess tremendous individual skill. It follows therefore that the more they play futsal, the more adept at it they will become.

“A national futsal league, not necessarily a professional one, can only redound to the benefit and enhance personal development of the individual players.

The following letter to the editor on the supposed underdevelopment of futsal in Trinidad and Tobago by president Geoffrey Edwards was submitted to Wired868 by former National Futsal Team manager Ronald Brereton:

Last night at the Domo Polideportivo in Guatemala City, Guatemala, another attempt at Futsal World Cup qualifying by the Trinidad and Tobago Men’s National Futsal Team came to a predictable and painful end.

For the record the touring party played four matches and lost all four, 7-1 and 8-2 versus Costa Rica, 6-2 versus the Dominican Republic and 4-3 against hosts Guatemala.

There is a claim made about people who do the same thing over and over and expect different results, I make no such claim. However, Futsal Association of T&T president Geoffrey Edwards must accept full responsibility for this clearly unacceptable debacle.

Since the end of the failed attempt at qualifying in 2004, there has been talk about forming a futsal league in Trinidad and Tobago. To date, we are no closer to this; all because one man has no interest in such a venture.

Educators refer to ‘recency and frequency’ as part of the learning process, and when you look at our players, they all possess tremendous individual skill. It follows therefore that the more they play futsal, the more adept at it they will become.

A national futsal league, not necessarily a professional one, can only redound to the benefit and enhance personal development of the individual players. This reality has bypassed Mr Edwards since 2016 when the then TTFA president David John-Williams asked him to organise a futsal league that the TTFA would assume full responsibility for.

It was in this very forum that Keith Look Loy indicated there was no membership of FATT that the TTFA knew of; further they were non-compliant, since they had no registered constitution and never held elections. This must not continue.

Today, I call on the TTFA, through the normalisation committee, to intervene and bring some order to futsal in Trinidad and Tobago. As it stands, Mr Edwards—and by extension FATT—is accountable to no one. He is free to do what ever he wants with this grassroots sport.

He keeps talking about five pillars of something, the last of which is a futsal league. In my mind, that and a pink donkey we will never see.

You see, a league would mean facing the owners of futsal in Trinidad and Tobago, which is the players and the teams. It would require transparency and accountability and, of course, elections—all of which, it seems, he is mortally afraid of.

In closing, I congratulate the players for a sterling effort, especially in the match against Guatemala, and for having the courage to travel abroad in these troubled times. That is a true demonstration of patriotism and must be applauded.

You carried yourselves well as model citizens of Trinidad and Tobago. The same cannot be said of Mr Geoffrey Edwards.

He claims that his target for qualification is 2024. Who decided that? Then, in the absence of an organised futsal league and any structure for futsal development in Trinidad and Tobago, why did we enter a team?

Mr Robert Hadad, you and your normalisation committee must rescue futsal from FATT.

Konstin hails ‘amazing’ accomplishment of T&T Futsal Team, despite four defeats in as many games.
By Lasana Liburd (Wired868).

The defeat meant the Soca Warriors were eliminated after just two matches, as they lost their opener to the Dominican Republic 6-2.

“Last night’s game was a spectacular game,” Konstin told the TTFA Media. “I haven’t seen a game like that in Concacaf in years. And it just shows you what potential Trinidad and Tobago has. We put this team together two weeks ago and what these guys have accomplished in two weeks is amazing.”

Konstin’s view on his own work is unlikely to be unanimous. Trinidad and Tobago’s preparations for the 2021 Concacaf Futsal Championship started on 2 February 2021—not quite two weeks ago.

Dominican Republic, who never appeared in a Concacaf futsal tournament before, started constructing their own team on 27 February. And while the Spanish-speaking country created on outfit from players who already played the sport, Konstin selected only one player, Jameel Neptune, with previous experience of the game—as he opted for outfield players instead.

Three such outfield players, Ché Benny, Keston George and Dylon King, did relatively well in Guatemala and Benny stole headlines with an extraordinary opening goal last night. But it was a stretch to say that Konstin’s other selections looked comfortable on the futsal court.

Add Trinidad and Tobago’s pre-tournament friendly defeats against Costa Rica to Konstin’s overall tally and the American coach had four games at the helm of the National Futsal Team and lost them all, with a goal differential of eight scored and 25 conceded.

On the one hand, Trinidad and Tobago, who were previously coached by Strike Squad captain Clayton ‘JB’ Morris, have never beaten Costa Rica or Guatemala at futsal.

On the other, the Warriors, who were Caribbean Futsal champs in 2004 and 2008 and bronze medalists in 2016, had never lost to a team within the region before outside of Cuba and Curaçao. (Cuba participated in six Concacaf Championships since 1996 and advanced to the Futsal World Cup from five of them.)

It is debatable, then, whether Konstin has left the Futsal Team in better shape than he found them.

The American is unlikely to face pushback in his plea for the TTFA to invest more in the sport, though.

“[The] TTFA has to keep building upon this,” said Konstin. “Futsal can be a big time future for the country, for the communities, especially in the schools… It’s a no-brainer.

“[…] I highly, highly recommend that the TTFA goes out there and starts building futsal courts and building leagues, so one day the TTFA will win a World Cup in futsal.”