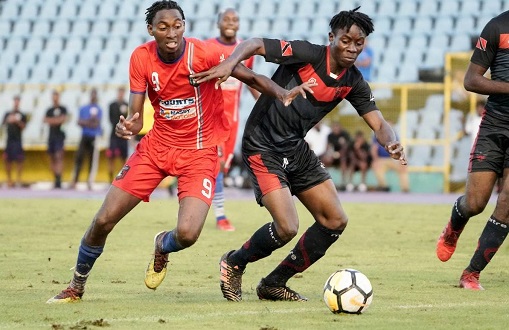 In a Match Day Three encounter on Saturday, at the Ato Boldon Stadium in Couva, Rangers cruised past the cellar-placed Point Fortin Civic 5-2.

Tyrone Charles scored a double, in the 48th and 67th minutes, with Jomoul Francois (13th), Akim Andrews (46th) and Ross Russell jnr (77th) chipping in with one apiece.

There were two other matches in the Abercrombie Group, at the Diego Martin Sporting Complex, on Friday.

Central FC and Police played to a 2-2 draw in the first encounter. Shakiel Henry put Central FC in front after four minutes but Police fought back with goals from Christian Thomas (26th) and Kemron Purcell (42nd).

However, Sean Bonval netted for Central, three minutes into the second half, to ensure a share of the points.

Three games were contested in the Immortelle Group.

In the latter of back-to-back matches, on Saturday, Tiger Tanks Club Sando earned a come-from-behind 3-2 victory over San Juan Jabloteh.

Bevon Bass scored an own goal, at the stroke of half-time, to give Jabloteh a 1-0 half-time lead, but Nion Lammy (53rd) and Kemuel Rivers (55th – penalty) replied as Club Sando went 2-1 up.

Jabloteh equalised in the 56th courtesy of Renaldo Francois, but Kareem Blake-Williams recorded the winner, in the 86th.

In an Immortelle Group double-header at the Hasely Crawford Stadium, Mucurapo on Sunday, Cunupia FC and AC Port of Spain (formerly North East Stars) drew 0-0 while Morvant/Caledonia United and 1976 FC Tobago Phoenix battled to a 2-2 draw.