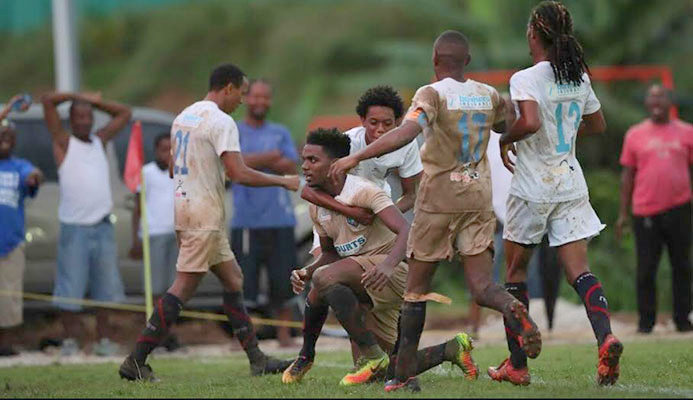 Perhaps an earthquake? This would be a reasonable thought if you live in Morvant and weren’t at the Morvant Recreation Ground on Sunday afternoon.

Seon Thomas had just sent thousands—by many estimates—into jubilation when he scored at the death to level Morvant Caledonia United 1-1 against visiting Defence Force FC.

Ok, no. But it felt that way for a moment by the reaction of the crowded Park Street venue, getting its second taste of top flight football in the Digicel Pro League after October 16 when Morvant Caledonia were defeated 4-2 by crosstown rivals San Juan Jabloteh.

This time around, Defence Force had led from the first half when a local Morvant star, Devorn Jorsling, wrong-sided Morvant Caledonia goalkeeper Marvin Phillip from the penalty spot on 35 minutes after he was brought down in the area by defender Seon Thomas.

Present was Defence Force Chief of Staff, Brigadier General Rodney Smart. So was a bus load of soldiers armed to the teeth. And on a soggy surface after earlier rainfall, the visitors were leading.

But Morvant Caledonia, desperate to reward their home supporters—arguably the best home support in the history of the PL, snatched the equaliser after seven minutes of added time.

Thomas, who was inches wide of redeeming himself on either side of the break with powerfully struck free kicks, made things right at the death when he headed a Densill Theobald corner past goalkeeper Sheldon Clarke, who had made two decent saves early on.

“This is one of the best feelings seeing the joy of the people of Morvant,” Morvant Caledonia midfielder, captain and local boy Akim Armstrong told www.ttproleague.com afterwards. “I think we could have done better but the draw is well deserved after fighting till the end.”

Armstrong said regardless of the score, he believes “Morvant people will come out to support because they are passionate about the sport and we love them for that.”

Maybe Armstrong is right. Morvant Caledonia were down but there were excitable cheers every time the home side attacked the Defence Force area. Or as one spectator put it, “I am for both sides. So I just want to see good football.”

“You see that one there?” another spectator probed, pointing to Jorsling just before kick-off. “He will score.”

“To see this support is fantastic after the first home game [when we lost],” said Morvant Caledonia assistant coach and former player Abdallah Phillip, who stood in charge in absence of head coach Rajesh Latchoo, who attended the wedding of his brother.

Phillip, who has aspirations to one day lead the club as head coach, added, “That’s why we gave [the supporters] the appreciation at the end… for coming and sticking it out with us.”

With the one point, Morvant Caledonia (6 points) and Defence Force (4 points) remained in 6th and 9th positions, respectively, on the 10-team DPL standings.

“The point justifies the way we played, and the way that we fought,” Phillip continued. “Defence Force came and gave a good fight and in the end both teams are leaving with a point.”

Jorsling, who had promised to score on the day, was left with a bitter-sweet feeling as his side failed to take away three points which would have pushed the soldiers off the bottom.

“I’m happy to score,” Jorsling told ttproleague.com. “But we really wanted the three points. It’s disappointing conceding in virtually the last kick of the game.

“We bossed the game although [Morvant] Caledonia gave a good fight. But we didn’t take the half chances we had and paid for it in the end.”

“I don’t really go at officials because I think my team must win in ninety minutes,” said the Defence Force coach. “…but I think we are hurt with bad decisions. When you play six minutes or seven minutes extra time after saying five minutes, and on the last kick we concede, it’s unfair.”

Gordon believes his side had done enough to snap a three-game losing streak with a win. “Based on the conditions of the ground, I thought my team played a brilliant game. We could have been a little more assertive in the attacking third at times but I think we really worked hard for the win result. We know the position we are in and we came here to slug it out.”

Tyrone Charles finished with a hat trick and teammates Jerome Mc Intrye and Kennedy Hinkson had a goal each while Sylvester Teesdale got the lone Civic item.

In the second game of the Couva double-header Jason Scotland scored twice and Kerry Baptiste, Jerrel Britto and Neil Mitchell each had a goal as Ma Pau Stars outscored Club Sando 5-3.

The win saw Ma Pau leapfrog Rangers for fourth position on the DPL standings by goal-difference with both sides on 10 points.

Meanwhile Sando remain third from bottom and only ahead of Defence Force by goal-difference despite finding the back of the Ma Pau net three times with a double from Akeem Roach and an opening item from Keron Cornwall.

Sando returns to play against Defence Force on Tuesday from 6pm at the Ato Boldon Stadium and Jabloteh are against Ma Pau from 8pm in the play-offs of the First Citizens Cup.

Action in the First Citizens Cup will continue the weekend of Nov. 12-13 with the quarter-final round which will see Central FC against Morvant Caledonia on Sunday Nov. 13 at the Morvant Recreation Ground.