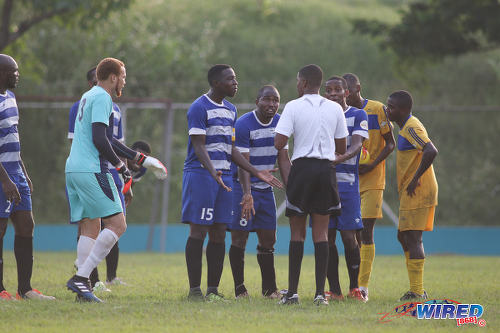 The T&T Football Association (TTFA) has confirmed an agreement by all stakeholders in the sport of football to work together with respect to the remainder of the T&T Super League (TTSL) season.

The TTFA in a release yesterday said, “While the opportunity facilitated sober and open discourse among the stakeholders in attendance, it was evident that the matter at hand required deeper introspection as well as further ventilation that was independent of the immediate constraints of ensuring that the TTSL’s inaugural season is completed.”

The release, said to have been done collectively by general secretary Justin Latapy-George and communications consultant Wayne Cunningham did not carry a signature, but further stated: “It was mandated that no segment participating in the League operations, would further air their discontent in such a manner as to bring the league and or its officials into public disrepute or odium.”

Look Loy, one of two coaches at the centre of the impasse between League One defending champion FC Santa Rosa and officials of the T&T Football Referees Association (TTFRA) after he verbally abused referee Cecile Hinds, was not impressed with the release, saying it had a lot of jargon. He however called on officials to stay true to the agreement and refrain from victimising his team or officials Devon London, Roger Smith and Junior Geoffrey, who took it upon themselves to do last Sunday’s match between Santa Rosa and Siparia Spurs at the Palo Seco Velodrome.

“I have heard that this (victimisation) has already started,” Look Loy said. TTFRA president Joseph Taylor made it clear no team or official will be victimised but he believes the decision by the trio to officiate without being appointed by the referees committee, is being met with dissatisfaction by other officials.

“They are the making of their own problems. In a group chat that we have, the referees are firmly of the view that London, Smith and Geoffrey have many questions to answer, as their actions did not sit well with other officials,” Taylor said.

The referees’ boss said he was happy with the decisions of the TTFA at Monday’s meeting at the Ato Boldon Stadium in Couva, but promised to address all the issues affecting them at a national consultation at the end of the season at which proposals will be offered to deal with realistic refereeing standards, penalties for officials and proper code of conduct.

He said their stance is not about Hinds but rather about respect for all referees, saying all officials will be held accountable for unsuitable behaviour in the coming seasons, as is done internationally.

London said he don’t believe he is being victimised but said there are calls for him to be thrown out of the TTFRA because of the manner in which he responded to accusations that he betrayed his colleagues by his actions.

“I believe in standing for the right thing and not just standing with others,” London said.