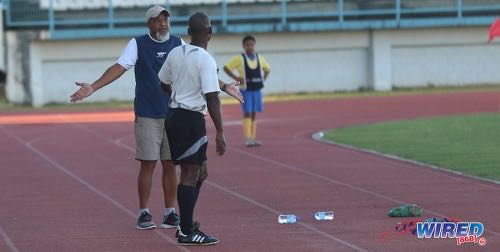 Keith Look Loy, president of the T&T Super League (TTSL) is threatening to write to the world governing body for football-FIFA- if the illegal functioning of the T&T Football Referees Association (TTFRA) continues in the coming year.

Look Loy, coach of League One campaigners in the TTSL, FC Santa Rosa, said the country has been subjected to a double-role by the T&T Referees Committee, which is the recognised body in the eyes of the FIFA, and the T&TFRA, which is an interest group dedicated to promoting the interest of referees, as stated in its constitution.

Look Loy, a former FIFA Development Officer, believes the dual-function of the two has led to a crossing of the lines in football which has proven to be detrimental to the sport. He referred to the TTFRA as a social club which has been given key responsibilities in the affairs of the sport and called on the TTFA to deal with the duplication of roles taking place.

He also cited a clear conflict of interest among the administration of refereeing with Joseph Taylor, head of the TTFRA also being Chairman of the Appointment Committee of the Referees Committee to the TTFA.

He quoted from the FIFA Constitution that says “The Referees Committee shall be composed of a chairman, a deputy chairman and the members deemed necessary to discharge its duties. Its members may not be affiliated to any clubs, leagues or any other football organisation.”But Taylor dismissed claims of interlapping roles among the administrators of refereeing in the sport, saying both the referees’ committee and TTFRA have been complimenting each other.

“They work alongside each other to ensure the sport progresses. This is done in every football territory the world over and it has in fact, been encouraged by the FIFA,” Taylor explained.

Meanwhile Osmund Downer, referee aficionado also dismissed talks of overlapping roles as he sought to clear the air on the function of the TTFRA. “The appointment of referees is done by the Appointment Committee of the Referee’s Committee of the TTFA. The first aim of the TTFRA is to seek welfare or represent the interests of referees in their Leagues and Associations all over the world,” Downer said. The Referees Committee of the TTFA, on the other hand, has an overall responsibility for the management, development and progress of the quality of officiating. Downer said since referees function on a voluntary basis in T&T, they are not obligated to officiate at any match, especially one in which they are subjected to abuse.

The veteran referees believes the TTSL’s request for reimbursement is a senseless call as referees in T&T have no contract with any league or association.

Look Loy, in his capacity as president of the TTSL, said he will hold the referees firm to a promised consultation aimed at dealing with the issues affecting the sport. The veteran coach who has been at the helm of his club FC Santa Rosa for the past 25 years, said he will also continue the super league’s request to be reimbursed for matches that referees were not appointed to in the TTSL this season.

He was slapped with a one match ban and $1,000 fine along with his assistant at Santa Rosa, Jovan Rochford, for abusing referee Cecile Hinds in a hotly contested match between his team and Hydro Tech Guaya United on November 5 at the Arima Velodrome.

Stand-off! TTSL say they paid referees in advance; Downer: “We had no contract”
By Roneil Walcott  (Wired868).

Trinidad and Tobago Football Association (TTFA) Referees’ Committee Board member Osmond Downer is denying that the Trinidad and Tobago Super League (TTSL) had any written contract agreement with referees for the just-concluded TTSL season.

Yesterday, acting on behalf of the TTSL, the League’s general secretary Camara David requested reimbursement from the refereeing body to the tune of TT$19,206 for three boycotted games during the inaugural TTSL season which ended on 10 December. However, Downer, who is also vice-president of the Trinidad and Tobago Football Referees’ Association, stated that the referees did not breach any contractual arrangement.

“The Referees’ Committee has no written contract with the TTSL,” Downer told Wired868, recalling the meeting the bodies had before the start of the TTSL season. “All they had were discussions regarding the supply of referees. The only thing that was agreed upon was the conditions of service.”

Downer was of the view that refereeing locally was completely voluntary, and he stated that the boycott of TTSL games on 12 and 19 November occurred because the referees were fearful of abuse at the hands of players and team officials.

“The individual referees expressed trepidation and fear of abuse and they wanted the abuse to stop,” said Downer, driving home the point that referees cannot be required to come out and officiate.

TTSL president Keith Look Loy confirmed that conditions of service were discussed before the start of the season but travel allowances and match payments for referees and assistant referees, he said, were also covered in the meeting. And David noted that the referees were paid in advance. According to Look Loy, it was a payment which the TTFA advised was to be paid to them and not to the Referees’ Committee.

And the TTSL proceeded on that basis.

Meanwhile, TTFRA president and Referees’ Committee chairman Joseph Taylor told Wired868 that he had taken note of David’s letter and would be taking the matter to TTFA general secretary Justin Latapy-George.

Just last month, the TTFA acted as mediator when the TTSL and TTFRA tried to break the impasse that threatened to prevent a smooth end to the TTSL season, which saw Hydrotech Guaya United walking away with both League and Cup titles. And although David noted that the TTSL had enquired who would be reimbursing them for the “unrecoverable expenses” they had incurred in November, the response had so far been slow in coming.

So are Joseph and company going to accede to the TTSL’s reimbursement request, which came as a result of a TTSL Board meeting on 4 December?

“We have noted the letter and we are going to take it up with the general secretary of the TTFA,” Taylor said.

It is uncertain if Latapy-George and the TTFA will act as mediators on this occasion but the general secretary told Wired868 that he was yet to hear from Taylor on the issue. Latapy-George did say that the doors for dialogue are always open and he would not be surprised if a meeting with all parties were held before the end of the year.

Meanwhile, TTSL president Keith Look Loy assured Wired868 that the TTSL Board will be forced to act if the Referees’ Committee does not offer a response by the first week in January.

“We are going to have to make a decision if we don’t get a response in reasonable time,” Look Loy said. “We will have to bring TTFA president David John-Williams into this because the Referees’ Committee is an agent of the TTFA.”

“Logically and legally we are in the right,” Look Loy continued. We are waiting on the Referees’ Committee and we want to know if the answer is ‘no’, if they will leave us hanging in space or if the answer is a ‘yes.’”

On 12 November, players from WASA FC and Siparia Spurs were left out in the cold as their away games in Tobago against 1976 Phoenix FC and Bethel United respectively were postponed after Tobago officials failed to turn up.

At the time, Tobago Referees’ Association head Noel Bynoe was adamant that, unless Look Loy apologised for the comments he had allegedly made about a Tobago referee following an FA Trophy game in October, referees on the island would not abandon their boycott stance.

Look Loy subsequently apologised and the Tobago referees resumed service. However, on 19 November, no match officials turned up for Siparia’s match with Look Loy’s club, FC Santa Rosa, and Wired868 even had sight of a document which showed that no referees had been assigned to the game, carded for the Palo Seco Velodrome.

Taylor and the TTFRA were not pleased with the TTSL’s Disciplinary Committee’s decision to hand Look Loy and his assistant Jovan Rochford one-match bans and $1,000 fines following their verbal spat with referee Cecile Hinds on 5 November in a pivotal Santa Rosa versus Guaya clash. The referees head demanded assurances that in the future certain standards would be adhered to by coaches and players.

Santa Rosa’s fixture against Siparia eventually went ahead in Palo Seco on 26 November, when referee Roger Smith and his assistants Devon London and Junior Geoffrey ignored any boycott action and turned up for duty.

Thereafter, the TTFA intervened and managed to get the TTSL and the TTFRA to call a truce in the interest of successfully completing the 2017 season.

However, on Sunday, Look Loy slammed the performance of referee Rodphin Harris in Santa Rosa’s final league match against UTT on 10 December and declared that the truce was over.

“This referee […] can’t even pass the fitness test but he keeps coming back match after match after match,” Look Loy declared, after his team let the TTSL League One title slip from their grasp at the Larry Gomes Stadium. “Now the season is done, I can begin talking again and I can begin posting videos again…”

So we might be in for a return to the silly season. Perhaps not. It’s the festive season so the Santa Rosa boss can perhaps be persuaded to let peace and goodwill reign if Santa Claus, in the form of the Referees’ Committee or the TTFA, decides to fill their stockings with almost $20,000 in “unrecoverable expenses.”

Earlier this week, Super League president Keith Look Loy admitted his body had written to the TT Football Referees Association requesting a refund of the aforementioned sum for three 2017 Super League matches which were boycotted by match officials.

Justin Latapy-George, general secretary of the TTFA, admitted yesterday, “we haven’t received any official correspondence regarding any sort of claims or any kind of reimbursements or repayments.”

When asked whether or not the TTFA would get involved in the matter, Latapy-George replied, “I wouldn’t want to comment that far as yet. We are the overarching governing body.

“Once it falls under our remit, it’s something we have to look at very objectively to see how best we can come to some sort of compromise and resolve whatever the issue would be,” he added.

The TTFA, TT Super League, TT Football Referees Association and TT Referees Commission, recently met at the TTFA’s office in Couva, to discuss issues between Look Loy and the local crop of referees.

Latapy-George pointed out, “I wouldn’t say it would be going down the drain at this point. We did a joint press release that stated the provisions that were adopted by the parties that were in attendance.”

The TTFA general secretary continued, “We committed to approaching the matter in a very dignified and respected way. We do appreciate the fact that emotions would run high based on the matter on hand. We have limitations and we’re improving on the limitations.

“We’re in the business of football, to be as efficient and as professional as we can be,” he ended.