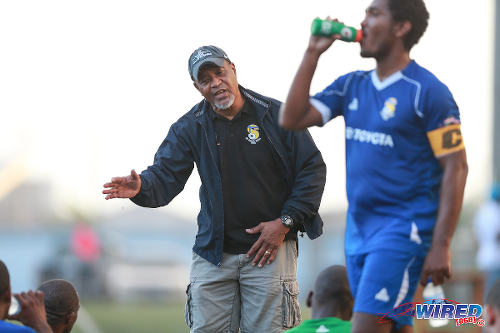 PRISONS FC officials believe they should have been informed of an appeal by Bethel United points which would have altered the standings and prevent Prisons FC from winning the title, on Sunday.

However, president of the Super League Keith Look Loy,in an interview with Newsday, on Wednesday, said a matter involving two clubs is not necessarily the business of the entire league.

Look Loy said when a decision is made that affects standings then all the teams are informed, which was done.

On Sunday, the TT Super League competition manager, Richard Piper, issued a media release, at 6.21 pm, announcing Prisons were the 2019 champions after their game against Police FC, at the YTC Ground in Arouca, ended in a 2-2 draw. It meant Prisons moved to 29 points, four more than nearest challengers Bethel United, who have a game in hand.

However, at 6.50 pm on Sunday, the league sent another release, indicating Bethel were successful in appealing the disciplinary committee’s decision to award Police the win in their November 10 clash.

That game between Bethel and Police, which took place at the Mt Gomery Recreation Ground, ended 2-0 in Bethel’s favour. But Police protested the unfit conditions at the venue and were later awarded a 3-0 win, by default, from the disciplinary committee.

Bethel’s successful appeal now puts them just one point behind Prisons with a game against Matura ReUnited in the final round and a chance of leapfrogging into first place.

Both Police FC and Prisons FC claimed to be in the dark about Bethel’s appeal when they played to a draw on Sunday.

Look Loy on the situation said, “...the Appeals Committee supported the Bethel appeal and the judicial process is completed.”

Addressing the release sent by Piper, Look Loy said, “He (Piper) was premature...Prisons knowing an appeal was in should not have gone off celebrating.”

Look Loy said that all the teams were carded to play their last match on Sunday, but because of the weather matches were postponed and now the title is in the hands of Bethel, who play their postponed final round match this coming Sunday. “Prisons has already played its full complement of games, its full schedule. Bethel has one left because Bethel’s game on Sunday by force of nature rained for three or four days made the ground impossible to be played on.”

In a press release, on Wednesday, signed by president of Prisons FC Ferdinand Bibby, the club believes more information should have been relayed to them and they were placed in a disadvantageous position.

The release said, “The Appeals Committee and Peter Thomas (Super League secretary) knew or ought to have known that the decision to award Bethel United the three points would have had an impact on the TTSL League standings, the title race and the tactics to be employed by clubs going into the final round of competition which was carded for Sunday 15 December, 2019.”

The Prisons FC release further said that the club would have liked to be informed sooner. “Why was it so important to withhold the decision until the night of Sunday 15th December, 2019? By withholding their decision until 7.10 pm on Sunday 15 December, 2019, the Appeals Committee placed Prison Service FC at an unfair disadvantage since Prison just like the other clubs in the league, media, fans, supporters and the general public who were following the league would have been harbouring a misconception that a certain permutation (Prison Service FC needing only one point to win the competition) was evident based on the legitimate expectation that the standings published and circulated by the TTSL competition manager, Richard Piper was correct and up-to-date.”