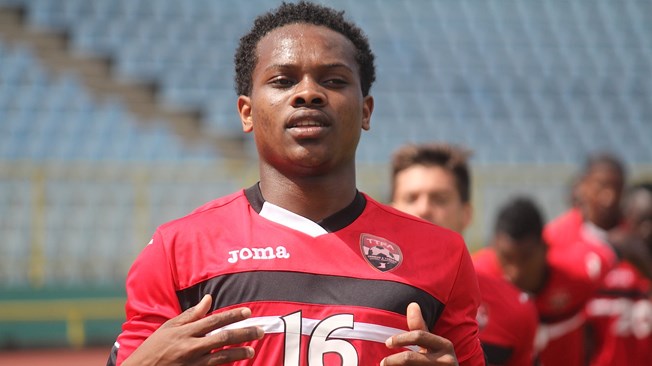 It’s been just over six months since Levi Garcia made his senior international debut for Trinidad and Tobago which he marked with a match-winning double to lead the “Warriors” to a come from behind 3-2 victory over St Vincent and the Grenadines at Arnos Vale. And the 18-year-old from Santa Flora, now a seasoned pro in the Dutch Eredivisie is hoping to again bring his a-game for Guatemala on September 2nd at the Hasely Crawford Stadium.

The game, similar to the one in March, is another one in which The Red Army need a result to keep their qualifying hopes alive as a point will push T&T through to the hexagonal final stage while a victory will keep them on course for finishing the semi-final group on top of the pack heading into the closing fixture against the United States on September 6th in Jacksonville, Florida.

“It’s going to be a big occasion for us and I am seeing a tough game as well for us on Friday,” Garcia told TTFA Media “But we will be ready for it. We have an amazing team spirit and a great squad that will pull us through.

“I have not played against Guatemala before but I have seen the games and I know the Central American style so I expect they will come all out and try to stamp their authority. But we have shown that we are capable of putting them on the back foot which is exactly what we will need to do. Once we settle in early and we make sure to avoid any silly mistakes then the game will be ours,” Garcia said.

Garcia has played in all three of AZ Alkmaar’s matches so far this season and is expected to feature for them on Sunday before arriving in Port of Spain on Tuesday to join the T&T team. He also scored three goals for the club in their preseason campaign.

“I had a strong preseason and we’ve already played three games in the new season. I feel really good at the moment. I’m just very excited as always to meet up with my national teammates for these two World Cup qualifiers,” he added.

The T&T team enters a live-in camp on Sunday while the Guatemalans arrive in Port of Spain via Panama City on a Copa Airlines flight at 4:30pm.

T&T head coach Stephen Hart will begin his full preparation on Monday with the majority of the squad.

“We have a some of the players coming in on Monday and Tuesday but we’ll start some work with those that are here on Sunday evening. The important thing will be to have everyone here healthy and ready for the match. It’s nothing new to us in terms of having a full squad in maybe three to four days before a match. We’ll focus on what we need to do and manage our preparations in relation to Friday’s match in a fully concentrated mode,” Hart said.

Tickets for Friday’s match remain on sale at Lotto locations nationwide and are priced at $300 (covered) and $150 (uncovered). Gates open at 4pm on Friday ahead of the 7:06pm kick off.