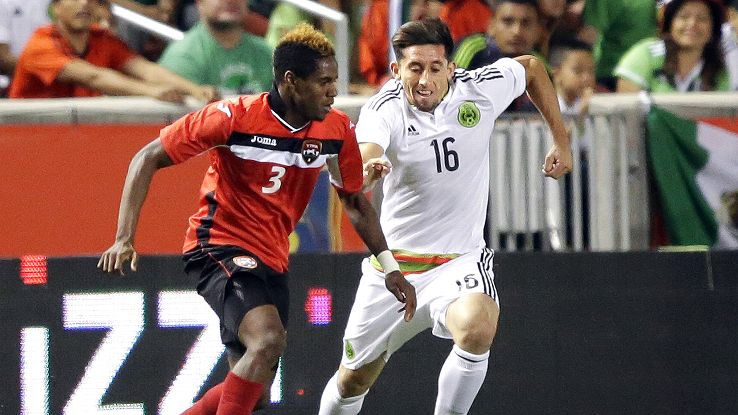 Some may say that Panama are one of the weaker teams Trinidad and Tobago (T&T) will have to face in the 2017 HEX, some may even say that they are also the oldest. One thing for certain, they are a cohesive unit and it's by no luck and chance they were unbeaten until their slim 1-0 defeat to T&T in Port of Spain last Friday.

Head coach Dennis Lawrence and his staff must be applauded for getting the job done effectively. T&T must now build on the victory and take it to the Mexicans in tomorrow's affair at the Hasley Crawford Stadium from 7pm.

If Mexico beats T&T tomorrow, they could very well qualify for the 2018 World Cup in Russia by summer. Mexico's next two games are at home against table-proper Honduras and a rehabilitated United States team and, with an almost 100% home record, victories for Mexico are a huge possibility. Now it's up to T&T to put a spoke in the Mexicans wheel and force them to wait a bit longer for their inevitable destination.

Now, without Keron Cummings, T&T never looked the same in recent times, the link-up play from the locally based superstar and T&T forward line were a match made in heaven. The talented left-footer played a pivotal role in T&T's 2015 Gold Cup epic 4-4 comeback against CONCACAF's giants that left pundits dumbfounded and the Mexicans faces in disbelief. It was like a bucket of ice-cold water over delusions of grandeur.

With hindsight, it is easy to brush all that off and suggest Mexico should always beat tiny T&T. Not at all, two months later without its inspirational captain (Kenwyne), T&T again pulled out a rabbit from their hats when they met the Mexico (Eli-Tri) in a friendly encounter at the Rio Tinto stadium in Salt Lake City. The match ended in a 3-all draw, this time Mexico were the one's getting the last laugh, as they had to rally from 2-goals down and a late strike from Héctor Herrera to end the match even. The Gold Cup match must had been replaying in the players heads and seemed quite content to have settled with a draw at the end.

What did we learned from both matches? own-goals from forced mistakes. If Kenwyne Jones (in the first match) and Daneil Cyrus (in the second match) hadn't scored against their compadre Jan-Michael Williams, T&T could have had a more positive results against the North Americans, obviously, Kenwyne's goal were an outright mistake, while, Cyrus' was a result of a silly mistake because of added pressure. Not blaming anyone, just amazed what T&T could do when up to the task.

Mexico, does not play well on the road and they do have a particular gripe when they have to play the Soca Warriors at home. Since 2000, T&T hosted Mexico 5 times, T&T won twice, drew twice and only lost once to the El Tricolor. On neutral grounds, both teams met 4 times since 2000, with 2 wins and 2 draws going in Mexico's favor.

Now, getting back to Cummings, the Central FC man was called up by new head coach Dennis Lawrence but failed to seal a spot on the final roster. One of the reasons were, he hasn't been able to regain his match fitness since being shot in his leg back in 2015. But we do have a player who looks revitalised and ready to lead Lawrence's team captain Kenwyne Jones, a player who manipulated and single-handedly tormented Mexico at the 2015 Gold Cup. The former Stoke City attacker could be the decisive factor in tomorrow' game.

Lawrence answered emphatically to his new job and has brought life into the team. Without getting carried away by the 1-0 result over Panama, I must applaud the T&T coaching staff and I do appreciate what I saw from the players, certainly, a result to build on and not crawl under a rock and criville-up when Mexico shows up tomorrow.

Dennis “Tallest” Lawrence looked impulsive and passionate from the bench, like Liverpool's Jürgen Klopp, it was nice seeing the him hugging his players when they exited the field, much love can only do wonders for the players' confidence. The former soldier will definitely instill discipline and passion into the T&T team. As a player Lawrence was all heart and soul and as we all saw it was his goal took T&T to its first ever World Cup in 2006.

With Sol Campbell, one of England's best defenders in the game and T&T's goalscoring machine Stern John on his staff, Dennis seems to be in safe hands.

Hopefully, T&T don't get deceived by the Panamanian-pip and stay focus at the tasked ahead. No doubt T&T can pull off a surprise versus Mexico come Tuesday, but that would entirely be up to their top players like; Kevin Molino, Kenwyne Jones, Cordell Cato, Khaleem Hyland, Levi Garcia, Andre Boucaud, Joevin Jones and the new and well talked about Jamille Boatswain, all of whom can punch the wind out of any oppositions on their day.

Sheldon Bateau is also a welcoming sight after serving a one match suspension and will likely partner Daneil Cyrus in central defence.

Mexico meanwhile, is one of the most technically gifted teams in CONCACAF, they may not be able to match T&T physically or out jump them or even out run them, but they certain provoke you enough to make mistakes and lunge on you with venom. They are smart, they can move the ball around constantly like Barcelona does and they will sniff you out like a bloodhound until they get into a position to do the damage.

The North Americans know they wouldn't be able to match their taller competitors through set-plays or dead balls, so they would probably litter their players around T&T's penalty box and surge attacks down the center blazing shots from on-top of the box. T&T should count their blessings though, LA Galaxy's attacker Giovani dos Santos, FC Porto's midfielder Jesús Corona and of-course the talented PSV Eindhoven hitman Andres Guardado are all absent through injury.

The aging Rafael Márquez is also out after hurting his back in last Friday’s win over Costa Rica. Coach  Osorio has decided not to call in any replacements for Marquez and Jurgen Damm so he’ll have just 22 players available to him against Trinidad and Tobago.

In-spite the injuries, Mexico stilled managed to get the better of Costa Rica (Ticos) in an impressive 2-0 victory last Friday, claiming the number one spot and dumping them into second place. After, its 2016 Copa América Quarter-final humiliating 7-0 defeat to Chile, Mexico seems to have regain its confidence and at the moment they are riding high under head coach Juan Carlos Osorio. Mexico is likely to go with a similar 4-3-3 formation as against Costa Rica.

Speak to people who have known Javier “Chicharito” Hernandez from the beginning of his career and the characteristic that is highlighted is his mental strength. "Chicharito" has been able to ride the ups and downs of his career and consistently score goals, adapting to life in three different European leagues along the way. The center-forward now has his individual place in Mexican football's Hall of Fame.

Hernandez seemed to have regained his prolific finishing skills netting one against Costa Rica and as a result tied Jared Borgetti's goal-record for his country with 46. The Bayer Leverkusen striker is one of the quietest players you'll see on the field. He's quiet like a mouse but still as a house, you may not see him for a periods in the game, but then, he shows up from nowhere and pounce magically. In the box he is easily the best finisher in CONCACAF, he's slippery and quick, surely a man to keep close eyes on. Carlos Vela also adds to Mexico's attack.

Then you have Héctor Herrera, a player who can kick the ball like Steven Gerrard did in his prime from half field. Carlos Salcedo, wingbacks Luis Reyes and Miguel Layún and center-back Néstor Araújo are the anchormen that gets forward in a blink of an eye.

Araujo has scored two goals for Santos Laguna so far in the 2017 Clausura, but before Friday night, he hadn't struck for the Mexico national team since the 2011 Copa America. Fast-forward to Friday, though, and his towering and hefty figure allowed him to connect a darting header that Costa Rica goalkeeper Keylor Navas simply couldn't stop to put El Tri up 2-0. On top of being a great defender who provides solidity in the back-line, he's smart in taking the ball out from the back.

Orbelin Pineda, 20, is also a highly rated youngster that is liked very much by his head coach Juan Carlos Osorio. The Chivas man has emerged as the cream of the young Mexican central midfield crop. El Tri are loaded with good young players in the center, but Pineda is said to be one of the best.

What I admire Mexico the most for is, they let their boots do the talking. They however, are in the Warriors Den and does not like to be man-handled, they easily lose their rhythm, therefore, T&T must take it to them early and try to dictate the flow of the game because, if Mexico finds their tempo, it's goodnight for T&T and I mean, a knock-out punch, goodnight.

The El Tri has already arrived in T&T on a chartered flight from Mexico City around 23:30 and will train at the Hasley Crawford Stadium around 5:pm.

Osorio told ESPN's Tom Marshall: "I think that every game has it's own pressure," said Osorio. "Tomorrow we compete for three points to stay in first place [in the Hexagonal table]. The objectives are to qualify [for the World Cup] in first place. We have to keep on track."

"We spoke with the boys and our position was very clear in that we have to contest each loose ball as if it was the last and be attentive," he said. "That factor will not count in whether or not a player is selected."

The Colombian coach described Trinidad and Tobago as the "most athletic" team in the Hexagonal.

Good luck to the T&T staff and players, after tomorrow's affair, T&T will have only two home games left, so make it count against the Mexicans. I hope to see more fans turn up for this game unlike the match against Panama. It would be disappointing to see more Mexican supporters in our stadium or, the few there, making more noise that us in our turf.