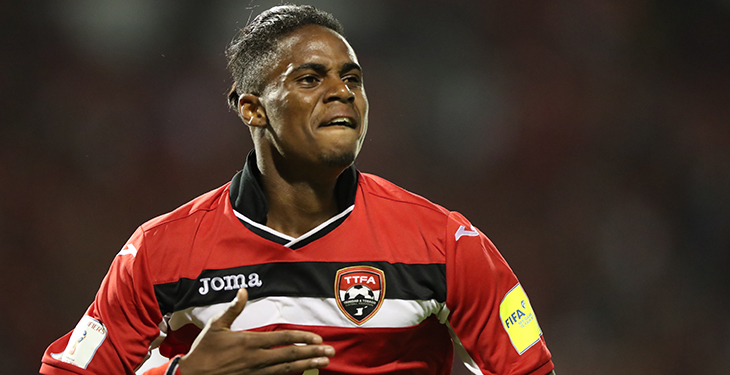 For the second time in less than a week, this country’s senior footballers will enter the field with the odds stacked firmly against them as they try to steal points in Tuesday night’s 2018 World Cup qualifier against Costa Rica at the National Stadium in San Jose.

Not only have T&T never beaten the Costa Ricans in a World Cup qualifier either at home or away but the home-team is coming off for what for them, is a disappointing 0-0 draw with Panama at home last Thursday and is desperate to take three points as they stand in second placed on the six-team table. But for T&T, the thinking of “impossible is nothing” must mean something tomorrow night as skipper Kenwyne Jones and his teammates know that they must pull out all the stops to get to a favourable position on the six-team table. Having already lost the home match 2-0 under Stephen Hart in November, T&T will be looking to now salvage something on the road.

T&T head coach Dennis Lawrence conducted the official one-hour training session at the match venue on Monday night in what has so far been cool and slightly windy conditions in San Jose since the team arrived the previous evening from Colorado.

“We don’t expect any favours nor any easy moments because we have always found ourselves in a position where we have to pull ourselves out from difficult situations and it’s no different at the moment,” team skipper Jones said. “We have to make it right for ourselves.”

“History shows that we never get anything when we play here but history is the past and we have to focus on pulling out everything for a chance of taking away at least a point from here. But winning is the main thing of course,” added the Atlanta United forward.

Christian Bolaños scored the opener and then set up the second item late the match for Ronald Matarrita when the both teams met in November.

This time T&T will be hoping to stay sound in every area of play for as long as possible.

“It’s going to be another match where we have to stay focused for every moment and try to break them down when we can. We must believe from now and for every minute during the game that we can get this done,” US-based midfielder Kevan George said.

“We know what to expect as it’s not like we are playing in these kind of conditions for a first or second time. The coach has prepared us once again to face the challenge and we will go out there and try to execute it with a certain drive, determination and also be clever when it is required of us in key moments of the game.”

Costa Rican head coach Oscar Ramirez told the press on Sunday that nothing but a win for his team would be satisfying.

“This second round is always important. The only way is to win. We have to think about nothing else at this stage,” Ramirez said.

Francisco Calvo, a current member of the team and former teammate of Aubrey David at Saprissa, added: “ “Trinidad and Tobago has players fast and strong and they know what they are going to play. We cannot take anything for granted against this team.”

The other match on tonight (Tuesday) pits Honduras away to Panama while the US and Mexico battled to a 1-1 draw at the Azteca on Sunday.

At the moment, only three points separates cellar placed T&T (3pts) from fourth placed Panama who are at home to fifth placed Honduras (four points) on Tuesday. The top three sees Mexico on fourteen points followed by Costa Rica (8.), ahead of the US (8 pts) by a better goal difference of one.

In twenty five meetings between both countries in all types of senior team matches, T&T have won three, drawn four and lost 18 with the most recent defeat being a 2-0 loss in March in Port of Spain. One of the memorable wins for T&T was a 2-1 win at the 2000 CONCACAF Gold Cup quarter finals courtesy of goals by Arnold Dwarika and the deceased Mickey Trotman.

T&T have beaten Costa Rica only once in any form of World Cup qualification, that being a 2-0 win for the Under 17 Men’s team in World Cup qualifying final round in Panama in 2013.