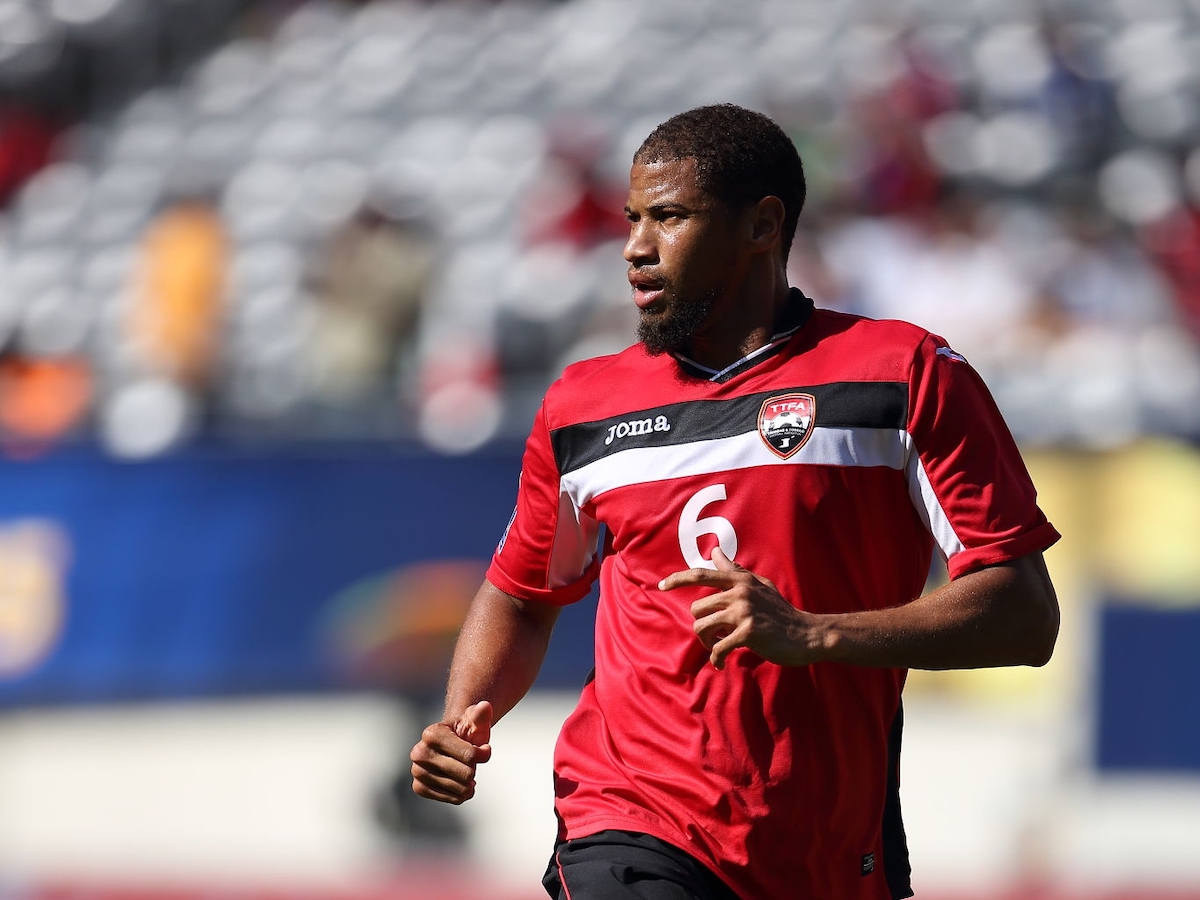 With the world on pause, reflection is inevitable - even for footballers. My time with the national team will always trump any experience with a club. Don’t get me wrong, my club experiences have been amazing, but it’s just a totally different vibe. It's a massive responsibility but the sense of pride you feel when representing your country is incomparable.

In 2009, my competitive debut and first start for the senior team was a true baptism of fire. Russell Latapy gave me the nod at age 22 in a World Cup Qualifier against Mexico in front of over 80 thousand spectators at the legendary Azteca stadium. The noise inside that cauldron was deafening. A teammate a mere five meters away couldn't hear you even if you were screaming at the top of your lungs.

The experience became even more surreal when we conceded within the first minute, without even touching the ball! My dream of playing for the senior team had almost instantaneously turned into a nightmare. Certainly not the most auspicious beginning. Thankfully we acquitted ourselves admirably thereafter and managed to equalise. In the end we were unfortunate to eventually go down 2-1.

After playing the remainder of those qualifiers, a stress fracture in my foot kept me out of football for almost a year. Recovery from such a  setback is lengthy and painstaking; but in that period I developed a work ethic that has stuck with me ever since. It also gave me the chance to improve on my shortcomings and understand the game a lot better.

My pace, or lack thereof, was often cited as a flaw. I improved other aspects of my game to compensate, but still knew I had to get quicker. At 6’4, this is hard work, but work that I was willing to put in in order to cut it at international level. My skipping rope and ladder became my best friends, staples in my extra individual sessions. I’ve always been my strongest critic, not in a negative way, but in a way that would never allow me to settle for anything other than “better”.

I try to never compare myself with others, but rather with who I was the day before. Football is not an office job; you’re always on display and people will have their opinions. I think for me it was always important to filter out the relevant messages from the irrelevant ones.

I’m not sure if or how I would’ve negotiated that challenging period without the backing of my family. Indeed my career might not have materialised if it wasn’t for them. I remember my mother being prepared on the sidelines with a snow cone in hand  after my U-12 & U-14 games with Coach Dada’s Trendsetter Hawks in the Queen’s Park Savannah.

I recall giving my dad the biggest high-five behind the goal where I scored on QRC grounds in a college league game. He was  coach, psychologist, fan, motivator, football guru and more ㅡ a lot more in fact. Anyone who claims to have been a regular at football matches in which I played will acknowledge that there was a tacitly reserved section in the stands for my family members both for club, and especially for national team matches. My parents provided every support imaginable. It wasn’t unconditional though. There was an academic standard that had to be maintained in order for me to be allowed to continue to play. “There is life after football” my dad always insisted.

The discipline that my parents instilled to prioritise and establish balance in my pursuits was critical in my personal and professional development. My dad and I still frequently have lengthy discussions about the game, both the on-field happenings, and the politics off of it.

After the injury layoff, I would have to wait another three years for a recall. A pair of decent performances away to Romania and Estonia earned me a place in the newly appointed Stephen Hart’s 2013 Gold Cup Squad. A summer tournament meant that most of the guys were in their off-season. I knew I had a bit of an advantage over them because my season in Kazakhstan was in full swing at that time. Still, I had to watch from the bench as we stumbled to a draw in the opener against El Salvador; then we were on the brink of elimination after being brushed aside 2-0 by Haiti.

With most coaches you have a fair idea of who would be playing based on how the training sessions were set up, but Stephen Hart always left you guessing. He always insisted that once he selected you for his squad, you were good enough to play on the starting XI, but you would have to earn it. Everyone was there on merit. No one was there just to make up the numbers. Between the travel and the proximity of the tournament’s games, it was virtually impossible to get a full session in, so I would always find the gym as soon as we checked into a hotel to keep pace with those who played.

The night before the final must-win group game against Honduras, Coach Hart came to me after dinner and said “if we get a clean sheet tomorrow we’ll qualify. . . Are you ready to help deliver that?” I assured him I was, but prior to that conversation I honestly didn’t expect to play, so much so that I went a little too hard in the gym that very morning, the effects of which I felt during the game. I silently endured my muscle soreness and we overcame Honduras 2-0.

“A clean sheet is all you wanted, coach? Why you didn’t ask me before?” I quipped amidst the post-game celebrations. I always saw that game as the catalyst for my revival at the international level. For the team, it also sparked a period of relative success under Hart that hadn’t been seen since the glory of the 2006 World Cup qualification.

the most respected and feared teams in the CONCACAF. We were eventually edged out 1-0 in the quarterfinal by Mexico and at the same stage two years later, this time to Panama, in a heartbreaking penalty shootout. Sandwiched between that, was a Caribbean Cup runners-up finish. Among those results were two unforgettable draws against Mexico, 4-4 at the 2015 Gold Cup and 3-3 in a friendly a couple months later.

Coach Hart helped convince us that we could match and overcome any team in the region, and that belief began to show in our performances and results. Perhaps at times he believed in us more than some of us believed in our own abilities. The battle for places was intense! But that never undermined the camaraderie in the squad around that time which was unlike anything I’ve ever felt in any team in my entire nomadic career thus far.

We took this momentum into the 2018 World Cup Qualifiers where we negotiated a tricky semi-final round group with two key back to back results. First a 1-2  win in Guatemala. This was no mean feat considering our famed 2006 Soca Warriors - with Yorke, Hislop, Lawrence and Stern John in that lineup - were trampled there, 5-1 along their qualification route. That was followed by a solid 0-0 draw at home against the USA a few days later.

I remember the huge Trinidad and Tobago flag draped over our fans in the uncovered section. Both the President and Prime Minister came out to greet us before kickoff. The rhythm sections in the near sold-out crowd all contributed to the truly special atmosphere that night. Sadly it was to be the last time the Hasely Crawford Stadium would be anywhere near capacity till this day― besides of course on Machel Monday.

The fortunes of the team plummeted thereafter as a new TTFA administration sought to dismantle the staff and squad. I too, became a casualty. By the time we had finished bottom of the HEX, I had already been unceremoniously phased out, along with several other previously key senior players. I have rarely felt so confident about something in football, so it still irks me to think about how the opportunity to qualify for that World Cup evaporated in the manner in which it did. The less said about that the better I suppose. But what’s for sure is that when you reach rock bottom, the only direction you can go is up. That upward trajectory is long overdue for T&T football.

My appetite to train and compete remains as strong as ever, maybe even more so with the current enforced hiatus. Admittedly though, that ‘life after football’ is a lot closer than I might want to acknowledge. I’m still undecided as to which path I will take after retirement, but my preferences definitely lean towards an endeavour that is sport related; management, administration, coaching perhaps.

I believe that the vast and varied experiences that I’ve accrued throughout my travels would serve me well in those capacities. I’m also keen to give back and rectify some of the issues that I had to endure as a player, that can all too often limit the potential of T&T’s footballers and athletes in general.

God willing, when this time of reflection and introspection is over, I sincerely hope that we do NOT simply return to business as usual. Rather, we grasp this opportunity to restructure and reform not just our football, but our society at large, of which the flaws and inequalities have been amplified by this pandemic. Forever an optimist, I eagerly await my participation in the manifestation of this ‘new normal’.

Radanfah Abu Bakr is a Trinidad and Tobago defender now based in India. He has played professionally in Belgium, Estonia, Indonesia, Denmark, Kazakhstan, Lithuania, England and Trinidad  and Tobago with Caledonia AIA. He was educated at Queen's Royal College and Kingston University in London. He holds a BA in Business Management.