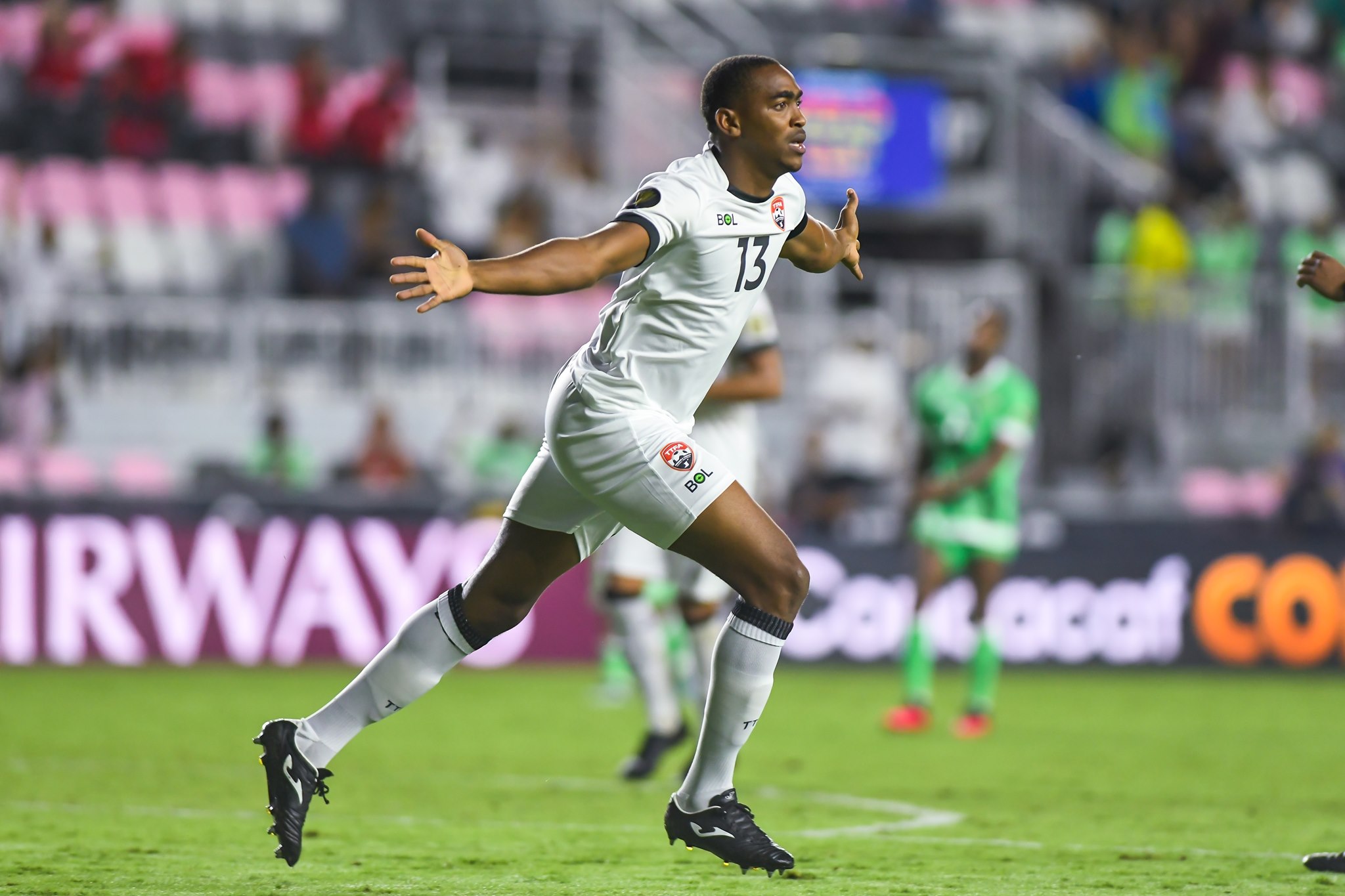 It was a winning start for the newly appointed national men's senior team coach Angus Eve, who took over for Terry Fenwick on June 13, after T&T failed to get past the qualifying stages for the 2022 Qatar World Cup.

Midfielder Kevin Molino, 30, playing his first match for T&T since 2019, converted his 22nd international goal for T&T from the penalty spot after referee Bryan Lopez of Guatemala consulted with VAR for a high-kick challenge by Montserrat's Nathan Pond to the face of Aubrey David, who ended with a bloody chin that needed medical attention but he finished the match with his chin heavily bandaged.

The second goal was scored by forward Marcus Joseph, upon seeing an open goal which was left unprotected by Montserrat keeper Corrin Brooks, who left his area to assist the defence outside the 18-yard-box. Joseph fired a long-range shot from about 30 metres out into the goal to the cheers of his team-mates and celebration of the fans.

In the final seconds of the three minutes of added-on time,, defender Ryan Telfer benefited from a pass outside the 18-yard-box in a play that involved three of his team-mates, he dribbled deep into the penalty box and hit a low right-foot shot which gave keeper Brooks no chance and the Soca Warriors closed-off the first half with a commanding 3-0 lead.

Nevertheless, at the other end Montserrat never gave up and kept pushing forward but T&T defence were solid and sometimes lucky. However, the team was finally rewarded when Lyle Taylor, the team's skipper cracked the T&T backline when headed home a shot that rebounded off the cross-bar that beat T&T goalkeeper Nicklas Frenderup for placement.

Montserrat had several chances after that but the players failed to convert.

At the other end, T&T midfielder Judah Garcia latched on to a pass over the defence in the 57th minute that put him in a one-on-one challenge with the keeper and scored a low shot which gave the keeper no chance and T&T extended its lead to 4-1.

Then Moore, who came on as Molino's replacement in the 63rd minute and for his fourth national cap, scored in the 68th minute and then rounded off T&T's scoring with an 82nd-minute item after he got a through pass from another substitute midfielder Duane Muckette, who came on for Joseph, and T&T was sailing to a comfortable 6-1 victory.

Molino, who last scored for T&T in Gold Cup match against Guyana that ended 1-1 on June 26, 2019 said after the match: "Together we start well. That set the tone for the first goal and the floodgates opened and we continued going. We should have scored more but so be it. We look forward to the next game now.

"We'll take it," said Molino of the six goals his team scored. "It's confidence going into the next game and we're not going to take the next game lightly because we scored six. We are going in with the same mentality and even more hungry to get more goals."

T&T faced Montserrat in Gold Cup playoff on Friday night. Kick off was delayed due to bad weather

Some lightning in Fort Lauderdale forced a 45 minute delay of Angus Eve’s first game in charge of the Trinidad and Tobago Men’s National Senior Team last night. But by midnight the flashes of brilliance at the Drv Pnk Stadium came mostly from the Soca Warriors, as the twin island republic romped to a 6-1 win in their opening Concacaf Gold Cup playoff fixture.

Kevin Molino opened the scoring from the penalty spot in the 21st minute and it was one-way traffic after that as the twin island republic repeatedly put Montserrat to the sword.

Strikes by Marcus ‘Lobo’ Joseph and Ryan Telfer gave Trinidad and Tobago a three goal advantage by the interval. And although Lyle Taylor pulled one back for the ‘Emerald Boys’ in the 55th minute, the Warriors completed the job in style with Reon Moore getting two goals off the bench while Judah Garcia also got his first senior international item.

Trinidad and Tobago will face either Cuba or French Guiana next, on Tuesday 6 July, with a place in the Gold Cup group stage at stake.

Just as important, there were smiles in the stands from supporters in red jerseys—and that has been a rare occurrence over the past six months, if not the last six years.

“We studied the tapes of the opposition and we asked the guys to do particular stuff during the game,” said Eve, who noted he had just three days to prepare with some players and a week and a half with others. “I thought that for the most part we kept to the game plan… I am proud of the guys today.

“This is one step in where we want to be. It is a good start.”

The last time that the Soca Warriors put away an opponent this comprehensively in a competitive match was on 29 March 2016 when, under then head coach Stephen Hart, they pummelled St Vincent and the Grenadines 6-0 at the Hasely Crawford Stadium.

It is just one match and the job is far from over. But the performance from Trinidad and Tobago’s players suggested that they quite enjoy playing without the animated Terry Fenwick screaming incoherent ‘instructions’ at them for 90 minutes.

Montserrat were spiky and bullish. Although they did not advance from their World Cup qualifying preliminary group, the Emerald Boys finished unbeaten with eight points and mustered draws against El Salvador and Antigua and Barbuda.

Coached by Scotsman Willie Donachie, ten of Montserrat’s starting eleven were born in England while the eleventh was born in Sweden. On paper, it was a Caribbean affair but the battle of the ‘Bol brothers’ might just as easily have been classified an intercontinental clash.

But Trinidad and Tobago would not be cowed, although Montserrat struck first. Literally.

Defender Aubrey David appeared to lose a piece of his chin to a high boot from Montserrat defender Nathan Pond in the 17th minute, while heading the ball in the opposing penalty area.

The Warriors appeared content to leave the matter right there as tough luck on David, only for referee Bryan Lopez to consult the video assistant referees (VAR). It was Trinidad and Tobago’s first introduction to the latest technological craze in the game and it offered welcome justice to the bloodied defender. If only VAR worked with dozy public servants or inconsiderate drivers.

Molino finished calmly from the spot, in his return to national colours after almost two years out through injury. And Eve had lift-off.

In the 35th minute, Montserrat again contributed to their own demise as goalkeeper Corrin Brooks-Meade left his 18-yard box to clear the ball but thumped it straight to opposing captain Khaleem Hyland at the half-line.

An alert Hyland side-footed first-time to Joseph and La Brea’s favourite son scored from 50 yards for his first competitive goal—eight years after he made his senior international debut in a goalless draw away to Belize.

Having made the initial error, Brooks-Meade had a chance to make amends as Joseph’s lofted effort appeared to be sailing his way, only for the heavyset goalkeeper to comically topple over like a straining forklift. Memes anyone?

Joseph would not complain. He spent the last seven months training with Fenwick’s local-based team without getting a sniff of the action. Last night, the two-time World Youth Cup player justified all the fuss from his substantial south Trinidad fan club.

Eve’s smile must have been getting wider on the touchline.

Joseph tallied an assist for Trinidad and Tobago too, as he headed into Telfer’s path after a neat spell of flicked passes by the men in white. And the Atletico Ottawa flanker held off Montserrat left back Joseph Taylor and powered into the area to drive between Brooks-Meade’s legs for the third.

Eve, of course, had moved Telfer from the centre forward position—where he was marooned under Fenwick—to his preferred role as an inverted winger, where he flourished last night. By this stage, football fans must have been thinking about asking the new coach for help in picking lottery numbers.

Ten minutes into the second half, Montserrat pulled a goal back as Taylor was on spot to head home from close range after Trinidad and Tobago custodian Nicklas Frenderup tipped a strike from substitute Spencer Weir on to his bar.

Taylor, a Nottingham Forest striker, raised eyebrows in England earlier this year when he told reporters that he would not take the knee since—although he believes that more is needed to promote racial equality—he considers the Black Lives Matter movement to be a Marxist group.

Taylor’s goal meant Montserrat were still on their feet. But the Warriors were not done with them yet.

Within seconds, Garcia restored Trinidad and Tobago’s three goal advantage as he slipped behind the opposing defence to collect a long, perceptive Jelani Peters cross and stroked past Brooks-Meade to make it 4-1.

The 20-year-old, who wore the number 11 jersey of his more illustrious big brother Levi Garcia, had his first international goal after eight outings. There has been some debate recently as to what young local talent looks like—hopefully Garcia (J) settled that argument.

One might ask what Garcia was doing lurking between the opposing central defenders in the first place. As Joseph dropped towards the ball, the Trinidad and Tobago winger slid inside on the blindside of the defence. It was a trick that happened too often last night to have been coincidence.

By now, Eve must have been salivating at the thought of watching this match over.

In the 66th minute, the interim head coach appeared to turn his attention to next Tuesday’s affair as he replaced Molino and Joseph with Duane Muckette or Moore. It was a conservative change, right?

It’s hard to tell, because, within seconds, Muckette sliced the Montserrat defence open with a diagonal ball and Moore was at the end of it. The soldier chopped inside to send defender Dean Mason sprawling, before he buried his shot into the near corner.

Moore was the last national player to get his visa for the United States and Commissioner of Police Gary Griffith was not slow in letting the country know that, by aiding the process, he denied a potential spot to his son, Gary Griffith III.

Ahmm, thanks commissioner. Fair trade is no robbery.

Muckette and Moore repeated the move in the 82nd minute with the lanky speedster steering his shot into the opposite corner on that occasion. After three unconvincing prior national appearances, Moore suddenly had two goals for his country on his fourth outing.

By this stage, if Eve knocked over a can of paint, someone would call it abstract art.

There will be tougher times ahead, and it is worth remembering that Dennis Lawrence started off with an impressive 1-0 World Cup qualifying win over Panama before going on to set the worst coaching record in Trinidad and Tobago’s history.

Yet, fans could surely not ask for much more from Eve or the Men’s National Senior Team last night. Eve credited his players for following instructions.

“It wasn’t perfect but for the most part the guys really did what we wanted them to do tonight,” he said. “The only blemish is that we got a really soft goal which I was very disappointed with.”

That ‘soft goal’ was all Montserrat were left to hold on to.

“We were very naive and when you play against good teams you can’t afford to be naive, because you will be punished,” said Taylor, in the post-game interview. “It hurts. We gave away sloppy goals and if you give away sloppy goals at this level, you’re not going to recover from that.”

On your knees then fellah. The Warriors are back.