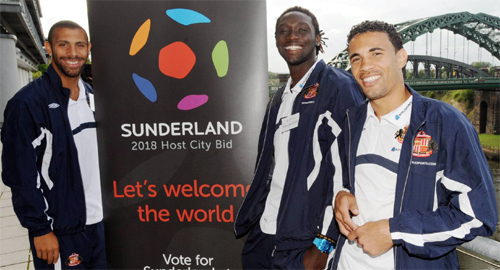 England’s lost bid to host the 2018 World Cup could mean harder times for T&T UK-bound players as disappointed Englishmen sought ways to vent their feelings over the past two days.

Calls to make it difficult for footballers from Trinidad and Tobago aspiring to play professionally in the United Kingdom, were emphatic as the English remained furious over their defeat in the first round of the bid on Friday, particularly following reports that not even FIFA Vice President Jack Warner voted in their favour despite prior indication that he would support their cause.

On a football discussion among football pundits on Sky Sports Television over the weekend, there were talks about the UK Department of Employment needing to pose stricter rules to make it harder for players from T&T to secure work permits and for managers of clubs in the respective Leagues to spend less time scouting the twin-island Republic and neighboring Caribbean countries for talented players.

Several online fans have also expressed similar views on the discussion forums for several top websites of some of England’s prominent newspapers. The Global Sports Forum, in its editorial on Sunday, stated: “For that reason some will feel relieved the English bid was wiped out.

No more spurious friendlies in Trinidad and Tobago to please Jack Warner, who cast his vote elsewhere anyway; no more delusions about England's standing in the world game.

The "football's coming home" rhetoric was dumped this time round but it made no difference to Fifa’s view that the English radiate a sense of entitlement.” Manchester United boss Sir Alex Ferguson, who made Dwight Yorke the biggest Caribbean signing to date in Europe, also shared his views on England’s defeat.

“The disappointing thing for me was that we only got two votes," he said. “Everyone was so shocked. But I don’t know how you can change Fifa. Will that 22 man committee change just because you ask them? Give me a break.

Do you know how difficult that is? It is a new word for Fifa - democracy.” Former English-born T&T international Ronnie Mauge, a former Fulham and Bristol Rovers player, also witnessed the Sky Sports discussion and was appalled by some of the comments.

He hopes that T&T players are granted a fair chance to play the game in England. But he has also advised that more players should try to secure deals in some of the other European Leagues. Former Newcastle United goalkeeper Shaka Hislop shared the same view.