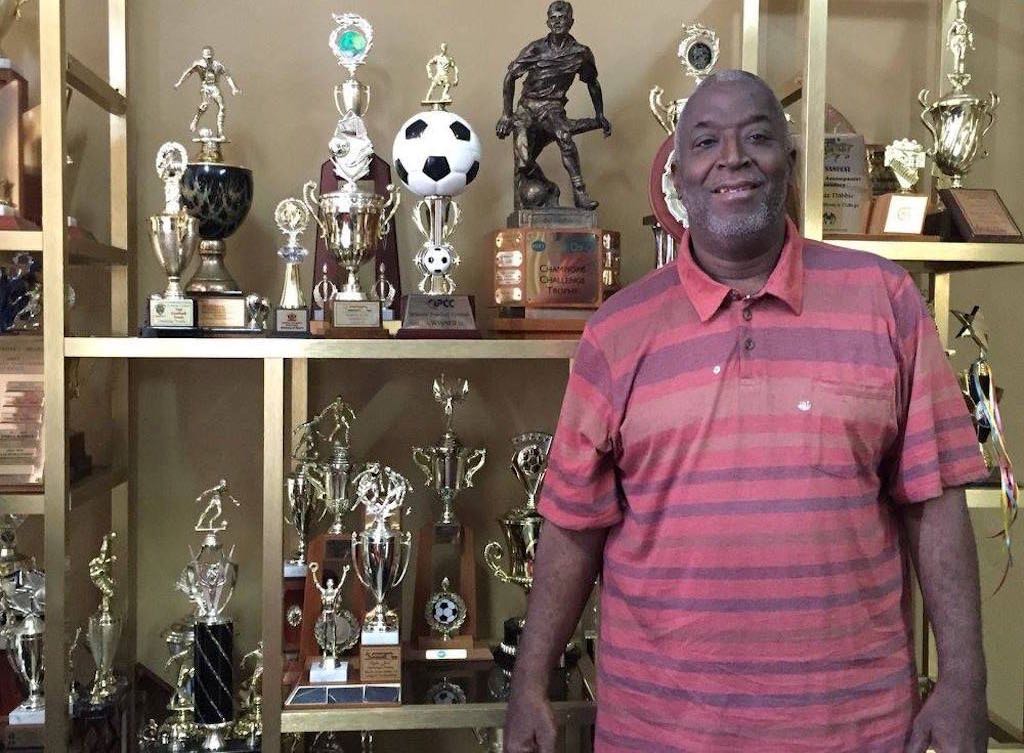 NIGEL “Grovy” Grosvenor was remembered for the love he had for his family, football and pan, but also for the care he showed for all the young footballers during his coaching career that spanned over 30 years.

Grosvenor, 63, a recovering cancer patient, contracted covid19 over a month ago and had been hospitalised since. He died on Friday.

Grosvenor began coaching St Anthony’s College in 1983 and spent more than 30 years at the school. He transformed the Westmoorings school into a powerhouse, leading the “Tigers” to multiple Intercol titles.

After leaving St Anthony’s a few years ago he spent three years with Queen’s Royal College (QRC) where he led the school to creditable performances in the Secondary Schools Football League (SSFL) premiership division.

Several players he coached at St Anthony’s went on to represent the national senior team including Jan-Michael Williams, Kenwyne Jones and Carlos Edwards. Grosvenor was also a physical education teacher and dean at St Anthony’s.

On Wednesday, hundreds were glued to Youtube to view Grosvenor’s funeral at the St Peters Catholic Church in Carenage.

Among those who attended the funeral were his wife Vanessa and his three children – Qian, Quishelle and Qia.

In the eulogy, Qia said, “Our Daddy is a legend, our Daddy is a hero. He is an icon. He is the greatest father out there, not only to my brother, my sister and I but to many other young men and women out here.

“Daddy did everything for us without hesitation. He did not have a favourite child. We were all spoiled endlessly by him.”

His daughter remembered how much he cared for his students and players at St Anthony’s.

“He made it his priority to ensure that his students would grow up to become successful young men. He would try his best to ensure that they all left St Anthony’s heading in the right path either by getting them football scholarships, getting them in the Pro League teams, putting them on to scouts or even joining the Defence Force.”

Qia thanked QRC for accepting her father where he ended his coaching career.

“He was welcomed into QRC with open arms, with boundless love and respect from the principal Mr David Simon and his friend Shaky and all the other staff members. We thank you for loving him and welcoming him into the Royalian family.”

Qia said Grovy was delighted in his role as grandfather for the past two years, saying he had a special bond with his granddaughter Erin. “On the 8 of February 2018 he became the happiest man alive. He was a proud grandfather…he acted as if she was the last grandchild in the world.” Qia said every morning her father and Erin had a routine as they would feed birds together and look at cars drive by.

Simon was among many who made comments on the live stream, along with former QRC captain Anfernee Stokes.

Others who expressed their sympathy to the family online were former St Anthony’s College footballers Jones, Abiola Clarence, Julius James and Edwards. Several St Anthony’s College well-wishers wrote “Once a Tiger always a Tiger” during the service. The funeral was shown online because only ten people were allowed to attend because of covid19 regulations.

Grosvenor’s coffin was draped with an SSFL flag, along with St Anthony’s and QRC apparel.

Had it not been for the COVID-19 pandemic, the funeral service of Secondary Schools Football League (SSFL) legendary coach Nigel Grosvenor held at St Peter’s RC in Carenage, yesterday would have been overcrowded.

Instead, there was only 10 people present mostly made up of family members, but the event was streamed live on video sharing website YouTube for the world to see. There were some 5,000 viewers by late yesterday evening virtually bidding farewell to the celebrated coach.

“Grovy” as he was fondly called by those who knew him was remembered as a great coach, a mentor to young men and a loving father and husband.

“What is more important was the way he impacted the lives of hundreds of young boys and gave them dreams and aspirations to become better persons,” James said.

The likes of Kenwyne Jones and Carlos Edwards, both of whom played at the highest level in England along with national players such as Brent Rahim, Julius James, Yohance Marshall, Lester Peltier all passed through Grosvenor. His career spanned three and a half decades on the sidelines with the bulk of it being at his beloved St Anthony’s College now known as the “Westmooring Tigers”. Grosvenor sent scores of players into the spotlight of national and professional club football.

As a coach, he won nine national secondary schools titles including six Intercol championships and three North Zone league titles. He was the mastermind behind the 2011 St Anthony’s team that played the season unbeaten.

His daughter Qia Grosvenor said, “Personally, we agree that our father is the Sir Alex Ferguson of local football.” She also shed light of how his long-time relationship with St Anthony’s College saw him also host his wedding reception there.

Off the field of play, Grosvenor loved steel-pan music and was a lifelong support of the Trinidad All Stars band. The former Trinity College student and footballer died last Friday at the age of 63. He had been battling cancer for the past years, and a couple of months ago he was admitted to the Couva hospital when he contracted the deadly coronavirus.

He appeared to have been recovering well from the virus, but reportedly passed away from kidney failure.

A pan and music lover. The number one Trinidad All Stars fan. An iconic football coach and a St Anthony’s Tiger forever... Mentor to young men, a limer, comedian, old-talker. Loved by many and loving many others. But mostly, “Grovy” was a great human being.

Former St Anthony’s College and Queen’s Royal College coach Nigel “Grovy” Grosvenor was lovingly remembered yesterday at his send-off, a funeral consisting of just ten family members, due to Covid-19 restrictions. But having touched many, another 1,000 tuned in to the live stream of the memorial service for the local football coach, who won six secondary schools InterCol and three national league titles with St Anthony’s College before, at age 63, he fell victim to the Covid-19 pandemic which has already claimed a million lives worldwide.

Giving the eulogy, his daughter, attorney Qia Grosvenor, began nervously and was tear-filled, but at the end was glowing with pride in remembrance of his life. Cousin Lisa James re-lived childhood memories, while Debbie Nahous sang a rendition of Ave Maria. Having gotten to know Grosvenor through his earlier battle with cancer, father Harold Imamshah also had a few special words.

“A star shines and Grovy will be no exception. He will continue to shine,” father Imamshah said.

A former national Under-17 coach, Grosvenor was described by those closest to him as being a man of many parts. He was a Brazil and Arsenal fan, and also protector of his nieces and investigator of the characters of boys wanting to be with them. He was also a mentor to his nephews, friend of his many cousins and the old-talker on the group chat among the extended family.

“He was a true never-see-come-see,” stated daughter Qia.

She also remembers “daddy” as a patient man, who would wait for three hours in the Hugh Wooding Law School car park, while his daughter sat exams.

“He would say that he preferred to pick us up at 4 a.m. from a party because he was sure we would all reach home safely,” Qia recalls.

“Daddy loved to boast,” Qia stated. “He proud to tell anyone willing to listen that his little girl had become a big lawyer. He was also thrilled when his daughter Qichelle gave him a grandchild.” Grosvenor’s aspiration to be a national footballer ended with a knee injury, but the academic and football accomplishments of his son—former national youth footballer Qian Grosvenor—brought him great joy.

Grosvenor was also a limer and a drinker whose grandmother lived on Henry Street, Port of Spain, around the corner from the All-Stars panyard.

“It was no surprise when Nigel became a lifelong member of the All Stars family. Nigel was a fixture in the panyard during the carnival season,” his cousin Lisa James recalled. “Although he couldn’t play a note, he knew what the arrangement was and was always the one to look out for on the stage, complete with towel on his shoulder.”

Grosvenor joined St Anthony’s College in 1983 as physical education teacher, after completing a four-year football scholarship at West Virginia University. He later took on the role of football coach and might have been St Anthony’s most popular Dean of Discipline, as established by the online contributions of some of the men he coached, among them Abiola Clarence, Julius James, Kenwyne Jones and Brent Rahim.

“S.I.P Grovy. Condolences from the Jones family,” former English Premiership striker and T&T captain Kenwyne Jones commented online. St Anthony’s College, where Grosvenor served for 35 years, became an extension of his life. He was later welcomed openly to Queen’s Royal College in 2018 where he served before he retired due to illness. Grosvenor met his wife at St Anthony’s College and loved the school so much, that his wedding reception was held there.

“His co-workers became our aunts and uncles. His players became our brothers,” stated his daughter, who recalled the many house limes and good times had at their home.