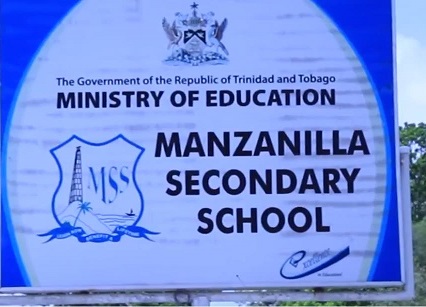 A media release on Thursday from the SSFL, said, "At the disciplinary committee of the SSFL held today please note the following decisions.

"Manzanilla Secondary's boys championship team has been suspended with immediate effect from the league. This is due to the fact that a person who was not a bona-fide student of the school according to the existing rules and regulations of the Ministry of Education played for the school."

The student, who lives in the east, said he wanted to transfer to Manzanilla Secondary for Upper Six to reduce his hours of travelling and help boost the school’s football programme.

The student’s father said his son applied online and was allegedly told by a school official he hsd been accepted. But after attending the school for four days, the student was removed from class and told he would not be allowed back until his status was regularised.

The student played a game for the school in the east zone of the SSFL. In a story in Thursday's Newsday, a school official identified by the boy's father denied giving oral approval of the transfer.

Speaking on condition of anonymity, the official said: “I did not talk to the boy about the issue at all.

“We don’t have any information from the boy that came into the school. From my knowledge, he did not apply.”

Asked how the boy was assigned to a classroom and attended the new school for four days, the official said: "That is the embarrassing and foolish thing about the situation."

The boy's father said his son played an SSFL match for the school against Valencia Secondary at the Sangre Grande Recreation Ground. He claimed that a day before the match, the school official said the transfer was successful.

As also reported in the story on Thursday, the father of the student said he believes some of the teachers don't get along and this may have led to confusion over his son's transfer.

“It is something within the school and certain people have their personal rift…Why you all putting the children through this?”

He was concerned that the school might be banned from the SSFL.

“We dealing with a whole team,” he said.

The Intercol competition continues on Friday.

This game will kick off at 3.30 pm, while, simultaneously, QRC will face Tranquillity at the Fatima Ground, Mucurapo.

In a double-header at the Hasely Crawford Stadium in Mucurapo, East Mucurapo will square off against St Anthony’s from 2 pm and, two hours later, Malick will tackle St Mary’s.

On Tuesday, in the preliminary round, St Mary’s hammered Diego Martin Central 9-0 at the Fatima Ground, and Blanchisseuse whipped Mucurapo West 5-1 at the QRC Ground.

Also on Tuesday, Tranquility defeated Trinity Moka 4-2 via kicks from the penalty mark, after the scores were locked at 4-4 at the end of regulation time at the St Mary’s Ground.