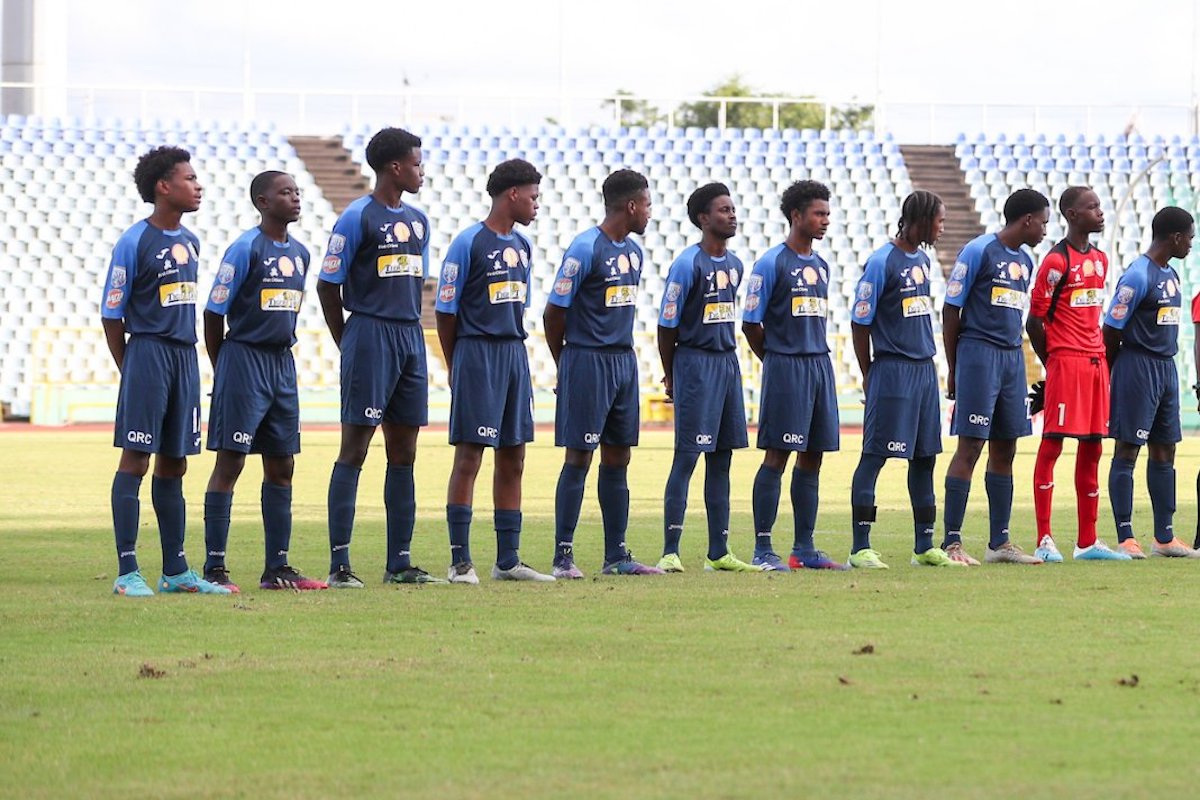 Both matches ended level and were decided by kicks from the penalty spot. St Anthony’s lost a two-goal advantage when drawing 2-2 with East Mucurapo, a match with late-action drama, but coming nowhere close to matching the thriller on Fatima College Ground.

There, QRC defeated lower division Tranquility 3-1 on spot kicks, having never led, as the teams played to a 5-5 draw over the 90-minute regulation period. QRC had their hands full on Fatima ground, where both Tranquil’s Ronaldinho Richards and QRC captain Aydon Caruth scored hat-tricks. Premier Division QRC never led, and had a torrid time controlling Tranquillity’s ‘Ronaldinho’ - the little number ten continually breaking down the Royalians’ best defensive efforts and also forcing a QRC goalkeeper change late in the match.

Coached by former National defender Radanfah Abu Bakr, Tranquility twice led by two goals in the second half, before the Kenwyne Jones-coached QRC ended level at 5-5 when Mussadiq Mohammed forced in a close-up rebound with four minutes left in the 90-minute regulation period.

The Championship Division boys drew first blood just past the half hour mark, a low shot from Richards, and Jamal Jemmott’s penalty kick had them up 2-1, while QRC replied each time with quality goals from their captain, as the first half ended 2-2.

The shootout continued in the second half, with Tranquility building a 4-2 lead, before Caruth provided another quality finish to complete his hat-trick for 4-3.

Having given Tranquility the early second half advantage, Richards completed his hat-trick and restored Tranquil’s two-goal lead at 5-3 with a lobbed shot after seeing the QRC goalie off his line. Micah Nelson took Caruth’s cross and squeezed the ball in at the first post as QRC rallied to 5-4 and another Nelson shot was parried into the path of Mohammed, who forced the ball in as the Royalians pulled level at 5-5 with just about four minutes left in regulation time.

Meanwhile, following an unmemorable, low quality, goalless first half; the action at Hasely Crawford stadium only became lukewarm in the second half between East Mucurapo and the “Tigers.” However, Mucurapo recovered from two goals down to pull level at 2-2 via a penalty, scored with just about 30 seconds left in added-on time.

Goalkeeper Dayshawn Alexander allowed a floater by the left-back Joachim Calllender to slip through his grasp, and St Anthony’s were ahead at 1-0 in the opening moments of the second half. Mucurapo would have been level except for the good work of goalkeeper German Jackson, who was twice quickly off his line to repeal raids on his goal.

St Anthony’s went further ahead at 2-0, through Jeremy Bobb, who wriggled out of a tackle and forced in a low shot, but Shurland Callender kept Mucurapo alive at 2-1 with a back post header from a corner kick. With those 30 seconds left of the four minutes given for added-on time, Mucurapo captain Khidr Atiba converted a penalty, following a ball-handling infringement. With momentum in their favour, East Mucurapo went on to win a long penalty shootout, which saw the Tigers hit the crossbar with their final two kicks.