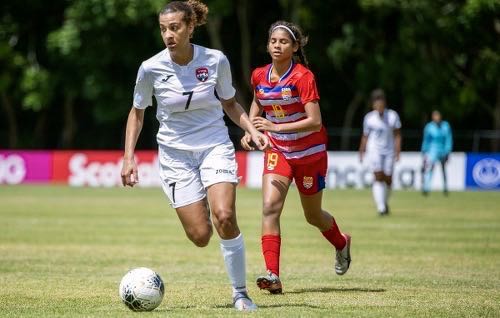 Despite the coronavirus pandemic nothing is stopping Trinidadian-born midfielder Sarah De Gannes on the field as the talented Canadian-based T&T player continues to excel in sports in the US and has managed to rack-up a few MVP awards for Brewton Parker College in 2020.

From a young age, Sarah began getting involved in many sports: including, dance (Ballet/Tap), then Karate, in which she excelled at the tender age of seven, achieving, the brown-belt which is the very last belt before the black belt. Shortly after, she developed a love for football and quickly got involved where she improved rapidly, so much that before migrating to Canada, local coaches in T&T wanted her to be showcased her talent to many international coaches, but nothing materialized because the timing wasn't right then for her.

Now fast forwarding to 2012 – 2015 Sarah, honed her skills exponentially with the guidance of some Canadian coaches, that led her to guiding her club team (Internazionale) to semi-final place in the league (Edmonton Interdistrict Youth Soccer Association). Also, in 2017, she was called up to the Trinidad & Tobago National U-17 team Women's team, led by coach Jamaal Shabazz at the time, she was made co-captain. During that tournament Sarah helped T&T to some major victories locally in Trinidad & Tobago, thereby qualifying for the 2017 CONCACAF final tournament in Haiti.

Then from 2015-2020, Sarah played elite football, got drafted to the Regional Excel Program in Canada, where highly skilled players are selected to be a part of a pool for potential Canadian national selection. These pools of players practiced regularly under the guidance of FIFA's certified coaches.

In 2020, she was called up again, this time to the Trinidad & Tobago U-20 National Women's team, coached by Richard Hood. There, Sarah played sterling football in the heart of T&T's defence, helping her team elevate the level of play, where they reached the quarter-finals of the 2020 CONCACAF Championship tournament beating St Kitts & Nevis, Cayman Island and Puerto Rico before bowing out to CONCACAF'S powerhouse Mexico.

At the end of Sarah’s high school year in 2020, she won the female athlete of the year, MVP for basketball, Heart & Soul award for basketball, and MVP for Flag Football.

Sarah is currently on a football scholarship, finishing up her freshman year at Brewton Parker College in Georgia, where she was named to the Southern States Athletic Conference Women's’ All Star Tournament Team, a first for a freshman at her college. She was also named to an all-star freshman team at the same conference: again, a first for her college.

Sarah continues to impress coaches throughout Canada, having been recently invited to partake in the United Women's Soccer League in North America. This league is almost equivalent to MLS. United Women's Soccer is a second-division pro-am women's soccer league in the United States. The league was founded in 2015 as a response to the dual problems of disorganization in the WPSL and of the folding of the USL W-League.

Sarah is looking forward to continuing to excel on the field of football and aims to represent her beloved Trinidad & Tobago at the senior level.

· 2016 – Achieved the female athlete of the year at her Junior High School Soccer Academy.

· 2017/2018 – Was part of soccer club that won the Provincial Cup and went to National where the club attained 3rd & 5th place respectively. Sarah was awarded MVP at 2 of the games.

· 2017/2018 – Part of the Regional Excellence Program for Alberta, Canada, where the province selects the ‘best of the best’ from players, in order for the players to be scouted to represent the national team.

What coaches are saying about Sarah:

“The best Midfielder in the Province” – Head Provincial Coach.

“Very strong physically and has an excellent touch with the ball” - Head Coach: FC Barcelona Academy.

“De Gannes is a neat, aggressive, versatile player who always seems proactive because she is such a good reader of the game, and constantly looks to be one step ahead of the play” – Jamaal Shabazz: Former head coach of the Trinidad and Tobago U-17 National Women’s Team.

"I enjoy watching professional soccer. It gives me inspiration to always do my best and try improve every single day. On bad days I usually just get a ball and play around with it, and almost instantly my mood goes from sad to happy. When I am on the field the feelings I get while playing is indescribable. Soccer is more than just a game for me, it is a passion, my passion."

"I would be a great asset to any team because I am always pushing myself to be the best player I can be. I am known to be a very unselfish player, but when needed, I can attack with full force. I am a powerhouse in the middle of the field, added Sarah."