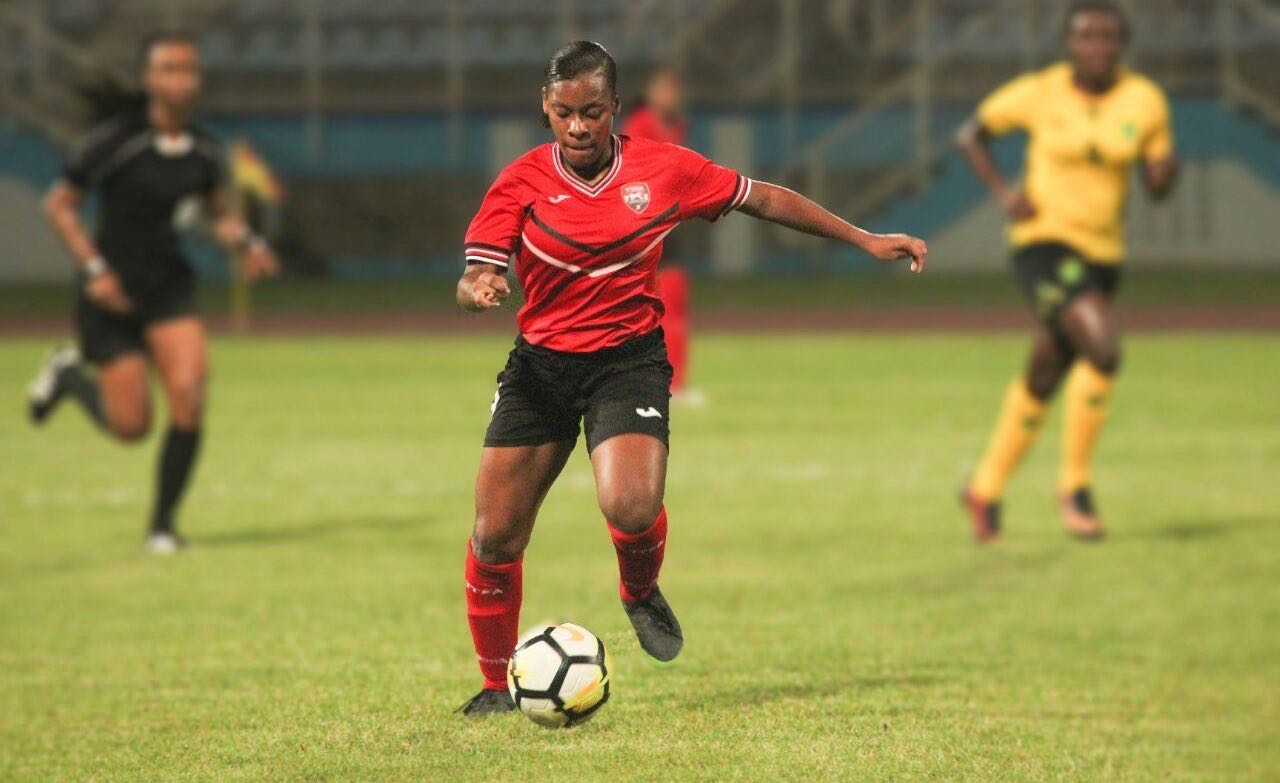 Shabazz not too excited by the win

Laurelle Theodore’s wonder goal was enough to propel T&T’s Under-20 women’s football team to a 1-0 win over Jamaica’s Under-20 team on Thursday night at the Ato Boldon Stadium in Couva.

Chelcy Ralph zipped in a curling free-kick from the right, which Theodore connected with on the volley, to smash an unstoppable left-footed shot past Erin Mikalsen in goal for the young Reggae Girls.

Playing down the result in the friendly match, head coach Jamaal Shabazz said, “This was a very useful exercise today, we are happy for the result but the game itself showed up a lot of things that we’ve got to work on. We need to work more on team play, playing together, more combinations, more passing and moving. But I am very encouraged by the efforts and aggression of the players.”

“We are far from where we need to be come January. There is this fallacy in the school teams, where one school only has two or three players, that they are stars in the school but in the international game they are not stars.”

The former T&T women’s senior team coach noted that the Jamaicans displayed their usual grit and determination but still did not test his team in the way he might have expected.

In a first half dominated by the home team, Jamaica limited themselves to shots from distance as the T&T defence found life relatively easy against the Caribbean rivals.

Theodore, the former St Augustine Secondary School student, wearing the number nine shirt, had earlier struck the Jamaicans’ upright with a left-footed volley from about 20 yards out and also managed to create a clear cut chance for her captain and attacking partner, Dennecia Prince, releasing the latter down the right flank, but with only Mikalsen to beat in goal, Prince’s final shot, though well hit, was straight at the custodian.

Prince was causing problems again in the 19th minute and drew the foul from Emily Caza which would lead to T&T’s goal.

Shabazz and his young team cringed at the start of the second period when Prince was scythed down by Nevillegail Able about 30 yards from goal after collecting the ball on the turn. Able was shown a caution for the reckless challenge while Prince was later stretchered off the field after attempting to play on.

In that period, T&T continued to create chances, none better than when Theodore played in Ralph but the latter saw her fierce drive from inside the penalty area, crash off the crossbar and back into play.

Looking ahead to Saturday’s second match against Jamaica at the Mannie Ramjohn Stadium from 4pm Shabazz said, “We will have at least seven foreign based players coming in. While for this game we used more of the local players, after Saturday we will be in a better position to make a judgement of how we go forward in terms of player personnel.”

Shabazz noted that there were still many areas this team needed to improve on before they are tournament ready for the CONCACAF leg of World Cup qualifiers in January.

Trinidad & Tobago started their Female U-20 campaign with an exciting 1-0 win over Jamaica at the Ato Boldon stadium in Couva on Thursday night. In a keenly contested affair forward Laurelle Theodore's neat flick gave T& T the lead in the 19th minute.

Theodore slotted home after a teasing Chelcy Ralph freekick was placed behind Jamaica's backline leaving the Jamaican goalkeeper motionless. "It felt really good to score the winner”, stated an elated Theodore. "This game was important for us to see where we are at and how much harder we have to work towards securing a top 3 spot in January", added Theodore.

First time skipper Dennecia Prince echoed her teammates sentiments about the importance of the game. "We needed to know where the team was in terms of actual game intensity and match fitness. Everyone had a good game, especially the defence and the players all played their role and put it in the work", stated Prince.

T&T had a couple half chances in the first period with Theodore's shot from just outside the 18-yard box slamming into the crossbar after having already beaten the goalkeeper getting the small crowd on their feet at “The Home of Football”.

In the second half the ladies had more ball possession and were more attack minded, plus the defensive tactic of two players closing down the ball put Jamaica under pressure when they were in possession. Most times, it was just an all-out midfield battle.

U-17 Striker Aaliyah Prince was a second half substitute and troubled the Jamaican defence with her dribbling skills. However good goalkeeping by the Jamaican custodian Yazmeen Jamieson denied Prince a goal on her U20 debut. Prince was one of three U-17 players drafted into the squad. Both teams meet again on Saturday afternoon (4pm) at the Mannie Ramjohn Stadium.