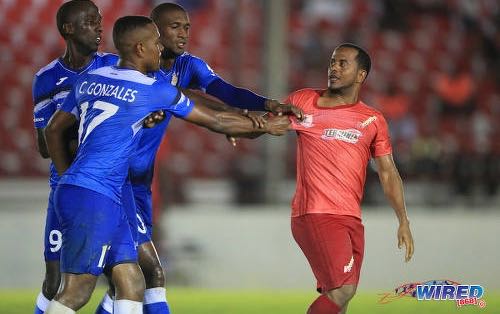 ASCENSION director Richard Ferguson is hopeful that the second annual Ascension Football Tournament will kick off on Friday, once the league gets final approval on Wednesday.

Ferguson is aware of the rise in covid19 cases in T&T, but with covid19 measures in place the competition can be played.

“We have our covid19 protocols to follow which is there will be no spectators, you have to wear masks, the temperatures of everyone will be tested before they play...the normal protocols for covid.” To date, T&T has recorded 279 cases of the virus.

Spectators will get the opportunity to get a taste of the action as matches will be shown on TV. “We are hoping to show it live on Sportsmax, a double header on Fridays and hopefully I believe games will be shown on TV6.” Ferguson said people could also stream matches live.

Once the league kicks off on Friday it will be the first major football competition locally since covid19 started to affect T&T in March.

Ferguson, who is also the managing director of Terminix La Horquetta Rangers, said the official fixtures will be released after the meeting is held on Wednesday.

Ten teams will compete in the first division and ten will line up in the second division. A total of 70 additional teams are expected to battle in the six zones.

The league is expected to run for four months from August to December. Teams will play one match per week for the duration of the league with matches being held on Friday, Saturday and Sunday.

Providing Ascension Football League financer Richard Ferguson gets the final approval tomorrow from the relevant authorities, the 2020 season will get going on Friday with a double-header minus spectators at the Phase II Recreation Ground in La Horquetta from 6 pm.

Matches will we played on Fridays, Saturdays and Sundays only.

A sources close to the league operations told Guardian Media Sports on Monday that, the 2020 season of the Ascension Invitational Football League (AIFL) has gotten the approval of the FIFA-appointed Normalisation Committee which is headed by businessman Robert Hadad, who is the chairman to kick-off and is now awaiting financial word from Ministry of Health and Ministry of Sports and Youth Affairs, as well as the Sports Company of T&T (Sportt) officials with regards to safety and health measures that need to be put in place due to the coronavirus (COVID-19) pandemic.

The league which is now in its second year and will see competition in three divisions, as compared to two last year, also got approval from the Confederation of North, Central America and the Caribbean Association Football (CONCACAF).

According to a source, approval from CONCACAF was sought because the League was expected to culminate into a regional play-off among the Caribbean's top clubs, with three teams from T&T, and one each from Barbados, Guyana and Jamaica.

The Ascension League is expected to mushroom into an 'Island Cup' play-off, however, this will be withheld this year due to the COVID-19 pandemic.

The source pointed out, "There will be prize monies totalling $594, 000. All referees will also be paid.

The tournament will also mark a return of Friday Night Football, as there will be live coverage of a double-header every week in the top tier, on regional Sports Television Network SPORTS MAX, from either the Diego Martin Sports Complex, the La Horquetta facility, which is the home ground of Rangers and the newly refurbished Police grounds, at the St James Barracks in Long Circular.

Meanwhile, W Connection Football Team, a multiple-times winner of the T&T Pro League will take no part in the Ascension League.

The 'Savonetta Boys' as they are popularly known, did not take part in the tournament last year, while AC Port-of-Spain which is formerly North East Stars have entered this season, after also opting out last year.