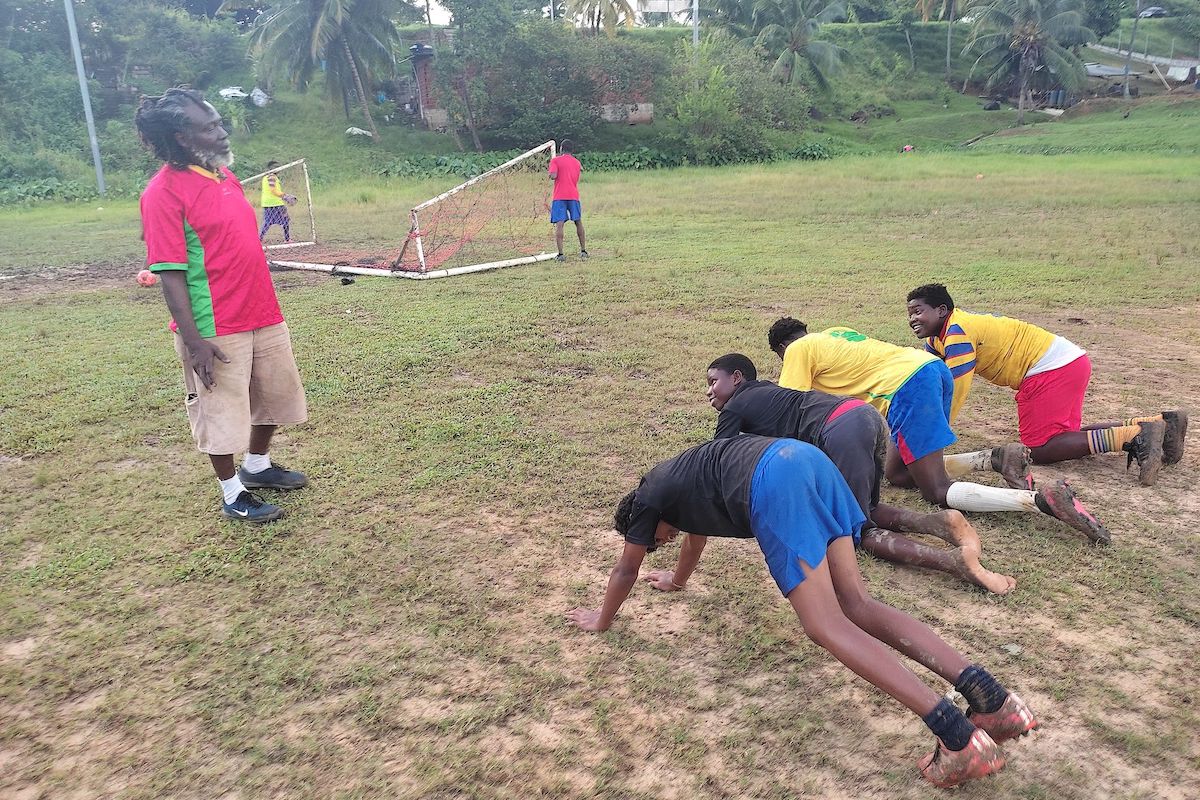 For decades, the Morvant Recreational Grounds has been a breeding ground for football talent, providing young men from the community and surrounding areas with the opportunity to hone their skills.

Sean David, Arnold Dwarika, Dennis Lawrence, Jason Scotland, Brent Sancho, Ross Russell, Aurtis Whitley, Stokely Mason, Hayden Tinto and Russel Latapy, some of the best local football talents, are just some of the legends that trained and developed their skills at the grounds.

But football and community life in Morvant are not what they used to be.

Residents claim that more youths are succumbing to poverty and gang life, and as a result, are not reaching their full football and academic potential.

Despite the numerous challenges, another one of the community’s most famous footballing sons, former national team star player Nevick Denoon refuses to give up.

The owner/manager of Morvant Elements knows all too well what football can offer.

It helped him get an education at Hillview College, then university, before taking him to the Defence Force. It also allowed him to travel the world playing with the Trinidad youth and senior football teams.

“He’s the only man doing something with the youths and them because it has plenty of them. It has plenty of footballers but they going to the gun. The community leaders and them on so much crap, instead of giving them a gun, they not saying let me give them a pair of football boots, or a uniform to encourage them in something positive,” a resident in his 40s told the Sunday Guardian.

During a visit to the Morvant Recreational Grounds recently to interview coach Denoon, it was clear that he was dealing with a lot.

While he smiled for the majority of the interview, he occasionally stared blankly into space.

In those moments, I imagined him reflecting on the magnitude of the challenges confronting his beloved club.

Formed in the 1980s, Morvant Elements was once the top professional team in the country, winning divisional titles. Denoon, whose family moved to Morvant in 1976, was one of the team’s star players. He has also been a senior club executive since its inception.

“We need economic support. We need corporate people to come in. For example, things like equipment. A parent has three children and can’t afford $300 for a pair of boots. Right now it’s several issues that are burdening us and the parental support is not there,” Denoon lamented while speaking at the pavilion.

The pathway to the pavilion was drenched in water and moss, creating a slippery surface, while stray dogs and goat faeces populated the stands.

Small sections of the field’s grass are broken up by large puddles of mud saturated by water, making it difficult for the ball to roll smoothly and making it easy for players to lose their footing.

The ground's lights do not work, limiting training by Morvant Elements and Malick Secondary’s football teams to daylight.

“We are stigmatised and marginalised, so the education standard has fallen badly. And that is one of my greatest concerns right now–education. Simple things like timetables, literacy and numeracy skills have fallen back. This is the worst I’ve seen since I’ve been in this community. But football now is the resuscitator. Football is the vehicle we are using again to rebuild,” Denoon said.

“My main issue is the development of the youngsters who are coming from a lot of broken homes. Parents unable to support themselves. The youths going to primary school can’t even spell or read, and I’m discovering that when they come to Morvant Elements to play.”

Over the years, Denoon has lost several promising players to violence and criminality.

A few years ago, he said, an Elements player, James Julien, was killed in a drive-by shooting while he was on his way to training.

“There aren’t the opportunities, or they are not taking advantage of the opportunities because they don’t know how. They can’t access the possibilities that are there, except maybe when they come to the club and we try to guide them. But what you find right now is they are controlling their homes because mommy isn’t working and if the son comes home with some food, mommy not even asking him where he got it from,” Denoon lamented.

“Do not rush only when you see the boys getting in trouble, but rush when he wants to play football. I mean if the parents would rather sit down or go and 'zess', rather than watch the boy play football on a Saturday, it’s only going to get worse. Something has to change."

Following our initial interview with the Morvant Elements owner and coach, we made our way into Never Dirty in search of some of his former players.

It was shortly after midday on that particular day in late November.

Yet, it was relatively easy to speak with young men near the Never Dirty Pavilion and Multi-Purpose Court.

At first, I spoke with two boys who play with Morvant Elements–one 16 years old, and the other, 15.

I asked them why they were not in school.

“I got in a fight, so I’m not in school right now…I also can’t be in football right now because of discipline,” the 16 year old said.

“I just stay home. I going in tomorrow,” the younger one said unapologetically.

Since the age of seven or eight, both have played football with coach Denoon.

They dream of making it far in football, but it was clear that they lacked confidence in realising that dream.

“What could stop you from making that happen?” I asked.

Joseph Jacob Nicholls, 18, took time to speak with us near the court as well.

Personable and with a beaming smile, the Morvant Elements defender said he was currently injured.

“We try all how to bring back football in the community–to make the community lively again, nah. For the children to come out to play ball. To have fun and not bicker amongst each other,” Joseph said.

“Coach Denoon has been there. He’s our sergeant. He will never give up, our coach... That’s one thing. He will always be there for us, always be there to train us and show us the goodness of football.”

Joseph said his dream was also to be a professional player.

Once he knows how to push himself, nothing can stop him from making that happen, he said.

“Like I always tell people, it wouldn’t be easy. It will always be hard. All I could tell you is never give up. Always have faith you will make it out there in this life no matter what. You could be from this community, or you could come from here or there. Always remember the place where you really come from and always remember God will never give up on you,” Joseph added.

Two other former players–Quinton and Mark–were working near the court while we were speaking with residents.

They joined in, willingly, to speak highly of football and Denoon’s contribution to the community.

“Sarg has been there for my older brother, Ronny. He’s also been there for Kyle. Daddy and Sarg played together…Football is a togetherness. Sometimes you don’t like a boy who you have to play with, but you don’t want to lose, so you work together,” Mark, a delivery truck worker in his early 20s, said.

“Football helped to develop my character in a positive way. Football has offered that to a lot of young people in the community,” Quinton added.

Later in the day, I returned to the Recreational Ground to observe training and meet some of the younger players.

As I approached the pavilion, I observed coach Denoon speaking with the two 14-year-old players.

They had no football boots, so the coach had to make the tough decision of deciding who would get the last remaining pair of boots that he had.

Yasim (name changed) eventually got them for the day because he came to training first.

Michael (name changed) was not pleased and began to pout.

“But coach, he wear them last time,” Michael said.

To the front row of seats, next to the remaining training equipment, were two big crocus bags.

One was full of black beans, while the other had white rice.

Before every training session, Denoon pours some of each into little bags and gives the players to carry home.

Nobody knows the stories of some of the children at the club, and few seem to care, Denoon laments.

Out of the group of around 15 players training that day, at least six did not have football boots.

Their parents cannot afford to buy them a pair.

One of the club’s most promising players, age 12, is still a couple of years away from writing the Secondary Entrance Assessment (SEA).

He dropped out of school for a while, but the coach managed to get him back in.

Yasim, who was lucky enough to get the last pair of boots that day, is no longer in school.

Having dropped out during COVID, he works the odd day job in construction to help his family make ends meet.

One of the 18-year-old players is fatherless–lost to violence.

Michael is struggling emotionally to deal with a broken home.

His father has two families–something he just cannot understand, so he is acting out.

During the training session, Denoon pulled aside Michael and another youth, 14, training to be a goalkeeper.

Denoon said he was teaching them to shoot and catch, but I want you to hear this.

“Spell catch,” the coach said to the other player.

“Can’t remember,” the other youngster said.

Denoon looked at me after the boys walked away and said, “That’s my challenge right now and no one seems to care. If it wasn’t for football these fellas would be walking the streets up and down.”

Recounting his own life, he said, “My mother, Violet Williams, is my hero. She worked at Hilton as a waitress for 33 years and she taught me everything and said I could do anything. And football has given me everything because it gave me discipline and I think that’s where we are falling back. They are not allowed the opportunity. Nothing is there for them to be part of.”

Before leaving the training ground that evening, I spoke with a parent of one of the players.

“Mr Denoon is a founder and a builder and an asset to this community. He is one of the few people contributing to youth development in football. At the end of the day, if you ask most of these guys the seven times tables, they will say 1x7=7 and 2x7=14, but then they stop. Morvant Elements is not just a football club, it’s also an educational facility. He tries his best to educate them also.”

In June 2021, Education Minister Dr Nyan Gadsby-Dolly said approximately 2,000 students dropped out of school since the beginning of the pandemic.

In the 2022 Secondary Entrance Examination, more than 9,000 students scored less than 50 per cent.

Calls to Sport Minister Shamfa Cudjoe on the issue were unanswered, her phone went straight to voice message.

How to help the youth footballers