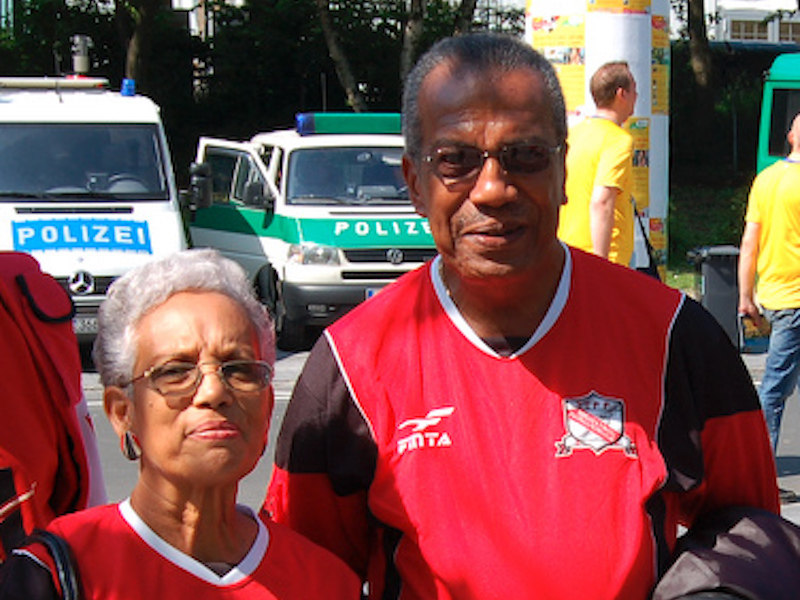 Young players at the time, both Cummings and Leroy De Leon offered glowing tributes to the former sports broadcaster Joseph, who died Monday at age 80.

Cummings recalls playing under Joseph for just about three years before leaving to play professional football with the Atlanta Chiefs in North America, along with De Leon, Warren Archibald and Jan Steadman.

Cummings and Archibald, playing on the flanks, were mere schoolboys in the T&T team during the 1967 CONCACAF Championship held in Jamaica. Cummings had impressed playing for 1964 Port of Spain Football League champions Paragon, when breaking the dominance of the likes of Maple Sports Club and the Regiment.

Joseph was known simply as “Skipper” by national teammates, among whom included Alvin Corneal, Selwyn Murren, Bertrand Grell, Pat Small and Tyrone De LaBastide. “You had to do something to earn the name ‘skipper’,” said Cummings. “Everyone called him that.”

A former St Mary’s College student, Joseph was inducted into the Trinidad and Tobago Hall of Fame in 1987. He was presented with FIFA’s Centennial Order of Merit Award in 2004 and, a year later, with the T&T Hummingbird Medal Gold (Sport).

“He wasn’t the best player in the world, but he had a voice that used to motivate you,” Cummings recounted of his former skipper.

Cummings credited Joseph for making him feel at home on the national team. When Cummings joined the team as a schoolboy, he earned the nickname “Sixteen” because of his young age.

“When you get on the national team and he was the captain, you felt comfortable. You felt important,” added Cummings. “He used to call me ‘Sixteen’. He used to brief you and give you the confidence to do well. He would say ‘all the best’ and if things not going too good with you, he would say ‘youth pick yuhself up...doh worry about it’”.

Joseph led Maple to four consecutive Port of Spain League (Savannah football) titles between 1960 and 1963, just like his older brother Alan Joseph, who copped a similar feat from 1950 to 1953. Southerner De Leon knew Joseph as being his opponent during the heated North-South Classics, which drew big crowds in those days.

Joseph led T&T from 1964 to 1968, during an eight-year stint on the national team. De Leon also played alongside Joseph for just a few years, but he held his former skipper in some regard. “We had our differences,” said De Leon, “But when I put on the national colours, and we were on the same team, it was we against them.”

DeLeon and Joseph both played in midfield. “He was a true gentleman. He was a very good midfielder, a good captain,” stated De Leon, adding, “I had nothing bad to say about him. He was a people person and I respected him a lot.”

TRIBUTES continue to pour in for Former National Football Team captain Sedley Joseph following his passing on Monday at age 80.

“A large extent of the local community understood that Sedley Joseph was a great footballer and his importance extended well beyond football even after he retired from playing the game,” Hadad stated.

“He certainly was a pioneer of the game and can be considered as one of the great players this country produced who never had the opportunity to play in a World Cup, a stage I am sure we all believe he was worthy of being on.

“Sedley helped put T&T football on the map by leading our national team to bronze medal at the 1967 Pan American Games, a feat never again to be achieved by a national team.

“In a recent interview you recalled your time playing for Maple at the Queen’s Park Savannah where so many would remember watching you display true leadership qualities and fascinating skill and composure in the middle of the field,” Hadad added.

“The Savannah in those days held a special atmosphere during the football season, with a barely-contained frenzy that you and your team-mates created weekend after weekend. Your greatest days on the field will remembered by many with affection.

“A legacy is etched into the minds of many and the stories they share about you. And you Sedley certainly left many speaking about you then and this will continue way past your time on this earth. You will be missed but your memory will live on for many years and your name is certainly recorded in the history of our beloved country.”