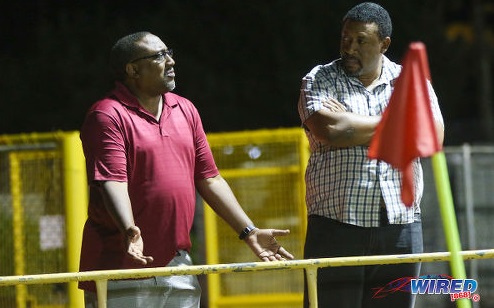 HAVING himself been at the helm of national teams with inadequate resources, Jamaal Shabazz believes former England defender Terry Fenwick must shield his footballers from things taking place in the background.

“The national coach must also be a manager and not a complainer,” Shabazz declared when speaking on the latest edition of the Ascension football show with host Joel Villafana.

Shabazz, who has coached national teams of T&T, Guyana and St Lucia, along with T&T’s women’s teams, thinks some of the negative issues surrounding the Trinidad and Tobago men’s national football team is due to Fenwick’s attitude and inexperience at international football.

Shabazz also condemned the Englishman’s objection to a particular journalist being at a national team’s press conference. He said it also exposes Fenwick’s lack of international experience.

Shabazz has been through issues similar to which Fenwick faces with the national team, including managing inadequate resources. “He’s got to be more solution oriented. ‘Okay, this was not in place. What do I do next?’ If I as the national coach go complaining, then who solves it?” queried Shabazz. “The national coach must be the driving force behind the solution. After the game (it’s) okay (to complain).”

Having been on the island for 21 years, Fenwick has won club titles at Caribbean level with San Juan Jabloteh and Central FC, but has yet to gain a point at CONCACAF level with these teams.

Shabazz suggests that Fenwick might be bowing under the pressure to prove himself. “He has brought something to club football in T&T. That, I respect,” Shabazz conceded. “He brought a level of intensity when he came with Jabloteh and he won the (Pro) League. But he has shown a propensity to be able to only coach teams that have money...that could get the best players.”

“I respect him as a (club) coach. He is very intense, he is very competitive, and he knows what he wants to do. But he has not coached international football and it is as new to him as anything else,” Shabazz opined.