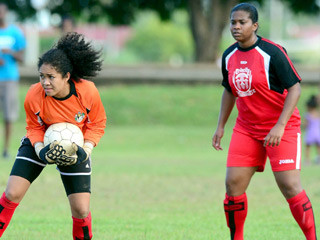 Many thought that early Premier Division leaders Trincity would walk away with three points easily from last week’s match against promoted St Augustine in the Trinidad and Tobago Women’s Football League. But their opponents had other plans and upset the favourites by a 3-0 margin.

In an intense face off last Saturday between Trincity Nationals and St. Augustine F.C., many would have thought that Trincity would walk away with 3 points. St. Augustine had other plans though and from the blow of the whistle anyone could see that St. Augustine was hungry and determined to win.

Lady Sharks in with WoLF.

Central FC will be entering a team into the Japs-sponsored WoLF (Women’s League Football) First Division. The newly formed team will compete against Tobago All Stars, Tunapuna Titans, UWI and Malabar All Stars.

Trincity Nationals continued their unbeaten streak this weekend and did so in exuberant style after routing newly promoted St. Ann's Rangers.

Women’s League Football (WoLF), the premier women’s football competition in the country, is inviting interested clubs to register for the upcoming season, which is set to kick off in April.

MALICK CITY FC will be aiming for their second straight win in the Premier Division of the Trinidad and Tobago Women’s League Football (WoLF) tomorrow.

Trincity Nationals’ prolific national forward Shanelle Warrick 29-goal tally in the past season earned her the “Player of the Year” award as well as the Most Valuable Player (MVP) honour for the Premier Division at the T&T Women’s League Football (WoLF) awards ceremony, held at the VIP Lounge, Hasely Crawford Stadium, Mucurapo, yesterday morning.